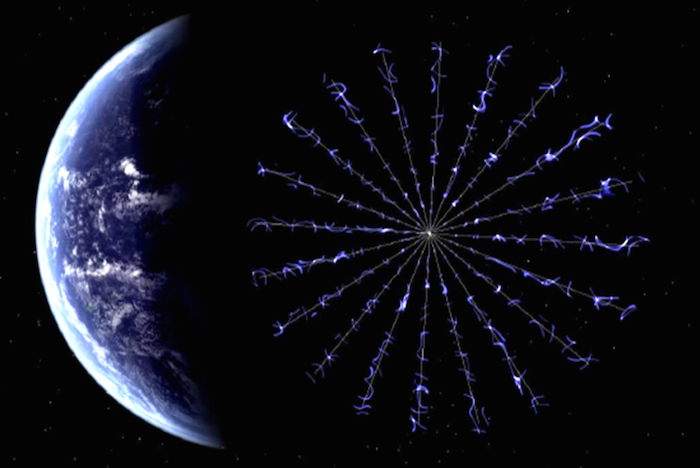 In this concept, long, very thin, bare wires construct the large, circular E-Sail that would electrostatically repel the fast moving solar protons. The momentum exchange produced as the protons are repelled by the positively charged wires would create the spacecraft’s thrust.

Testing has started at NASA’s Marshall Space Flight Center in Huntsville, Alabama, on a concept for a potentially revolutionary propulsion system that could send spacecraft to the edge of our solar system, the heliopause, faster than ever before.
The test results will provide modeling data for the Heliopause Electrostatic Rapid Transit System (HERTS). The proposed HERTS E-Sail concept, a propellant-less propulsion system, would harness solar wind to travel into interstellar space.
“The sun releases protons and electrons into the solar wind at very high speeds -- 400 to 750 kilometers per second,” said Bruce Wiegmann an engineer in Marshall’s Advanced Concepts Office and the principal investigator for the HERTS E-Sail. “The E-Sail would use these protons to propel the spacecraft.”
Extending outward from the center of the spacecraft, 10 to 20 electrically charged, bare aluminum wires would produce a large, circular E-Sail that would electrostatically repel the fast moving protons of the solar wind. The momentum exchange produced as the protons are repelled by the positively charged wires would create the spacecraft’s thrust. Each tether is extremely thin, only 1 millimeter -- the width of a standard paperclip -- and very long, nearly 12 and a half miles -- almost 219 football fields. As the spacecraft slowly rotates at one revolution per hour, centrifugal forces will stretch the tethers into position.
The testing, which is taking place in the High Intensity Solar Environment Test system, is designed to examine the rate of proton and electron collisions with a positively charged wire. Within a controlled plasma chamber simulating plasma in a space, the team is using a stainless steel wire as an analog for the lightweight aluminum wire. Though denser than aluminum, stainless steel’s non-corrosive properties will mimic that of aluminum in space and allow more testing with no degradation.
Engineers are measuring deflections of protons from the energized charged wire within the chamber to improve modeling data that will be scaled up and applied to future development of E-Sail technology. The tests are also measuring the amount of electrons attracted to the wire. This information will be used to develop the specifications for the required electron gun, or an electron emitter, that will expel excess electrons from the spacecraft to maintain the wire’s positive voltage bias, which is critical to its operation as a propulsion system.
This concept builds upon the electric sail invention of Dr. Pekka Janhunen of the Finnish Meteorological Institute, and the current technologies required for an E-Sail integrated propulsion system are at a low technology readiness level. If the results from plasma testing, modeling, and wire deployer investigations prove promising after the current two-year investigation, there is still a great deal of work necessary to design and build this new type of propulsion system. The earliest actual use of the technology is probably at least a decade away.
The HERTS E-Sail concept is being studied in response to the National Academy of Science’s 2012 Heliophysics Decadal Survey, a study conducted by experts from NASA, industry, academia and government agencies, that identified advanced propulsion as the main technical hurdle for future exploration of the heliosphere. The survey, which offered the agency a road map of the heliophysics community’s priorities for 2013-2022, highlighted the need for propulsion systems that could reach the edge of our solar system significantly faster than in the past.
To send a scientific probe on a deep space journey, the sail would have to have a large effective area. Space travel is generally measured in astronomical units, or the distance from Earth to the sun. At 1 AU, the E-Sail would have an effective area of about 232 square miles, slightly smaller than the city of Chicago. The effective area would increase to more than 463 square miles-- similar to Los Angeles -- at 5 AU.
This increase in area would lead to continued acceleration much longer than comparable propulsion technologies. For example, when solar sail spacecraft reach the asteroid belt at 5 AU, the energy of the solar photons dissipates and acceleration stops. Wiegmann believes the E-Sail would continue to accelerate well beyond that.
“The same concerns don’t apply to the protons in the solar wind,” he said. “With the continuous flow of protons, and the increased area, the E-Sail will continue to accelerate to 16-20 AU -- at least three times farther than the solar sail. This will create much higher speeds.”
In 2012, NASA’s Voyager 1 became the first spacecraft to ever cross the heliopause and reach interstellar space. Launched in 1977, Voyager 1 took almost 35 years to make its 121 AU journey. The goal of HERTS is to develop an E-Sail that could make the same journey in less than one-third that time.
“Our investigation has shown that an interstellar probe mission propelled by an E-Sail could travel to the heliopause in just under 10 years,” he said. “This could revolutionize the scientific returns of these types of missions.”
The HERTS E-Sail concept development and testing is funded by NASA’s Space Technology Mission Directorate through the NASA Innovative Advanced Concepts Program, which encourages visionary ideas that could transform future missions with the creation of radically better or entirely new aerospace concepts. NIAC projects study innovative, technically credible, advanced concepts that could one day "change the possible" in aerospace.
Selected as a Phase II NIAC Fellow in 2015, the HERTS team was awarded an additional $500,000 to further test the E-Sail and possibly change not only the way NASA travels to the heliopause, but also within our solar system.
“As the team studied this concept, it became clear that the design is flexible and adaptable,” said Wiegmann. “Mission and vehicle designers can trade off wire length, number of wires and voltage levels to fit their needs -- inner planetary, outer planetary or heliopause. The E-Sail is very scalable.”
Steering can be accomplished by modulating the wire’s voltage individually as the spacecraft rotates. Affecting a difference in force applied on different portions of the E-Sail, would give engineers the ability to steer the spacecraft, similar to the sails of a boat.
. 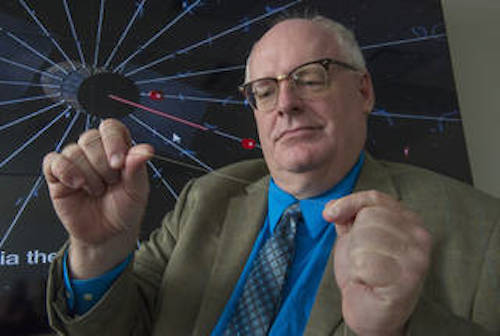 NASA engineer Bruce Wiegmann, principal investigator for the HERTS E-Sail, demonstrates the long, thin wires that will construct the E-Sail. Each tether is extremely thin, only 1 millimeter -- the width of a standard paperclip -- and very long, 12.5 miles.
. 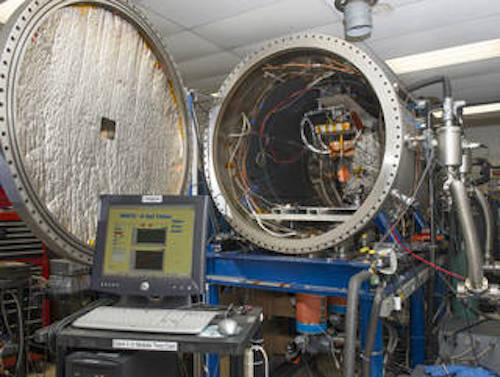