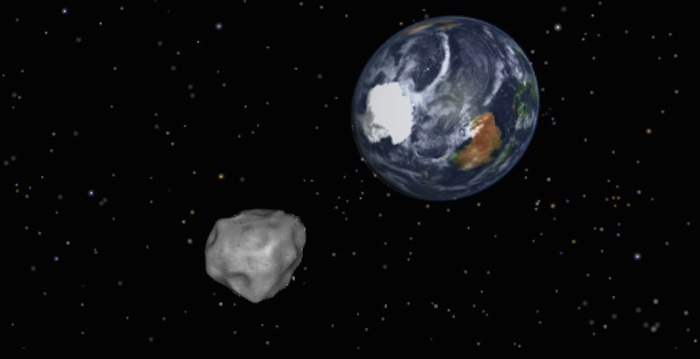 When you think of Earth, do you see our bright blue planet floating out in the vast darkness of space? Maybe you imagine the ring of satellites and spacecraft circling the planet.
But do you see the space rocks that could plunge into our planet, causing major destruction?
NASA does.
It's using a spacecraft called the Near-Earth Object Wide-field Survey Explorer, known as NEOWISE, to track near-Earth objects -- asteroids and comets -- that could hit our planet.
NEOWISE has discovered 72 new NEOs since 2013. The tally includes eight objects that are classified as potentially hazardous asteroids -- asteroids that could one day approach or hit Earth.
NEOWISE also is helping scientists study space rocks detected earlier by ground-based telescopes. It's provided new information on a total of 439 NEOs previously detected by those telescopes.
"NEOWISE discovers large, dark, near-Earth objects, complementing our network of ground-based telescopes operating at visible-light wavelengths. On average, these objects are many hundreds of meters across," Amy Mainzer, NEOWISE principal investigator, said in a news release.
If you combine the number of NEOs spotted by the satellite with the ones identified by ground-based telescopes, a total of 14,246 NEOs had been detected as of this week
So now that you know Earth isn't sitting out in empty space, you may have some questions.
Are these things going to hit us?
According to NASA's Near Earth Object Program, no big space rocks are likely to hit us anytime soon.
But keep in mind that smaller space rocks can slip by undetected. Remember Chelyabinsk? There was no warning before a meteor streaked across the sky over Russia on February 15, 2013, and exploded, shattering windows and injuring hundreds of people.
Russian divers find huge suspected meteorite chunk in Chelyabinsk
If we do spot a big asteroid or comet on a collision course with Earth, what can we do?
Maybe we could nuke it, according to NASA. Here's what the agency's Asteroid and Comet Watch page says:
"Unless there are a few decades of warning time, hazardous asteroids larger than a few hundred meters in diameter will require enormous energies to deflect or fragment. In the rare case of a large threatening asteroid, nuclear explosions that could push or fragment the object might provide a sufficient response."
Where do these space rocks come from?
NEOs "have been nudged by the gravitational attraction of the giant planets in our solar system into orbits that allow them to enter Earth's neighborhood," according to space scientists.
Besides tracking them, what's being doing to protect the Earth from NEOs?
NASA says "no government agency, national or international, has been tasked or accepted the responsibility to stop such an asteroid, should one be discovered."
The space agency is working on a mission to "redirect" an asteroid if it threatens Earth. But that mission won't be ready to go until the 2020s.
So if you want do something yourself, NASA also has issued an "Asteroid Grand Challenge." Here's how it works: Find asteroids, win a prize and possibly save the Earth.
Quelle: CNN
Astronomie
« Zum vorherigen Eintrag Zum nächsten Eintrag »
1930 Views
Created with page4