ASU's SunCube FemtoSat will open space exploration to everyone, with launch costs as low as $3,000 for low-Earth orbit
Going into space is now within your grasp.
A tiny spacecraft being developed at Arizona State University is breaking the barrier of launch cost, making the price of conducting a space mission radically cheaper.
“With a spacecraft this size, any university can do it, any lab can do it, any hobbyist can do it,” said Jekan Thanga, assistant professor in the School of Earth and Space Exploration
and head of the Space and Terrestrial Robotic Exploration (SpaceTREx) Laboratory.
Thanga and a team of graduate and undergraduate students — including Mercedes Herreras-Martinez, Andrew Warren and Aman Chandra — have spent the past two years developing the SunCube FemtoSat
. It’s tiny — 3 cm by 3 cm by 3 cm. Thanga envisions a “constellation of spacecraft” — many eyes in many places. A swarm of them could inspect damaged spacecraft from many angles, for example.
Thanga and the School of Earth and Space Exploration will host a free kickoff event Thursday night introducing the SunCube, followed by a panel discussion with scientists and space-industry professionals on the logistics, opportunities and implications of this breakthrough technology.
. 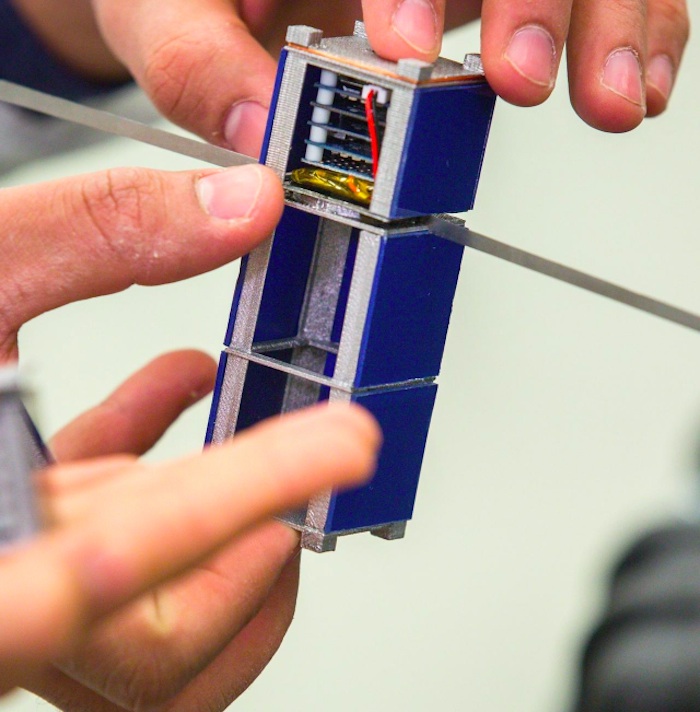 Launch and launch-integration costs currently run into $60,000-$70,000 per kilo. The Russians, the Chinese and the Indians all charge about the same amount, too. That can get pretty pricey for a full-size satellite.
“These high costs put out of reach most educational institutions and individuals from the ability to build and launch their own spacecraft,” ASU's team wrote in a paper detailing the new model.
Launch expenses for the SunCube FemtoSat will cost about $1,000 to go to the International Space Station or $3,000 for flight into low-Earth orbit. (Earth escape will cost about $27,000.)
“That was a critical price point we wanted to hit,” Thanga said. When SpaceX’s Falcon Heavy rocket lifts off later this year, Thanga expects costs to drop by as much as half.
Parts cost for a SunCube FemtoSat should run in the hundreds of dollars. A garage hobbyist could literally fly his or her own mission. One example is the solar panels. They aren’t available off the shelf in this size, so students cut them from scraps sold at a huge discount by manufacturers.
“That’s part of our major goal — space for everybody,” Thanga said. “That’s how you invigorate a field. ... Getting more people into the technology, getting their hands on it.”
. 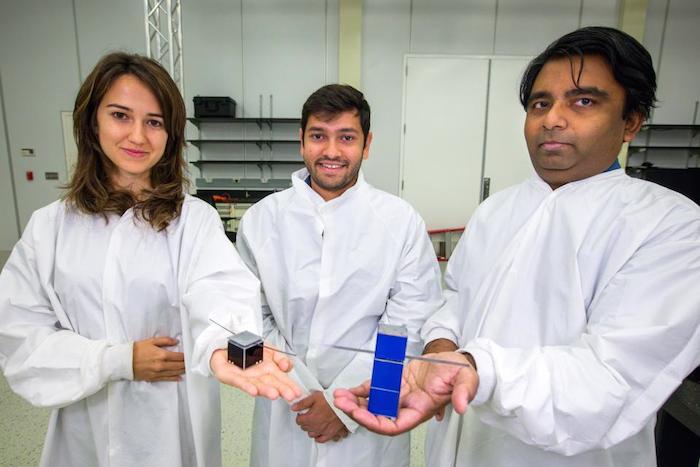 Jekan Thanga (right), assistant professor in the School of Earth and Space Exploration, worked with a team of students, including graduate aerospace engineering students Mercedes Herreras-Martinez and Aman Chandra, over two years to develop the miniature satellites. Photo by Charlie Leight/ASU Now
-
SpaceTREx is a systems lab, so the team members were less interested in creating a tiny spacecraft than they were solving a problem: Can lots of little spacecraft do the job of a single large spacecraft?
Over the two years they’ve worked on the spacecraft, Thanga and his grad students have stayed focused on miniaturization with a vision toward creating disposable spacecraft for exploration.
“There’s a whole community out there interested in this idea of low-cost, swarms of disposable spacecraft,” Thanga said.
And they’re getting smaller and smaller, thanks to smartphone tech, which has miniaturized everything.
“We’re piggybacking on the wave of miniaturization,” Thanga said.  “We’re interested in tackling the space access problem. What if we can have students send experiments into space? With something as small as this, you can make mistakes and send again.”
Thanga sees the femtosat as a starting point for educators, researchers and scientists, and policy makers. He envisions femtosats being sold on Amazon one day. They will be able to be used for four main objectives:
STEM education: provide hands-on design, integration and testing experience for students from middle school to university age.
Miniaturized versions of current experiments.
Experiments with miniature centrifuges to perform artificial-gravity experiments, with fluids, solid particles and for biochemical and pharmaceutical research.
Imaging. “It’s like your own GoPro in space,” Thanga said. “That would give you quite the front-seat view in space.”
Thanga is working with Erik Asphaug
, professor of the School of Earth and Space Exploration to get a prototype into space next year with their Asteroid Origins Satellite mission, a space laboratory that will mimic how asteroids are formed.
“We can show the world we can fly in space,” Thanga said. “Being an active person involved in a space mission — it’s the next domain in exploration.”
Quelle: Arizona State University
Raumfahrt wirklich klein
« Zum vorherigen Eintrag Zum nächsten Eintrag »
2273 Views
Created with page4