March 29, 1957
The NICAP document produces the following description:
March 29, 1957--Off East Coast, Florida. Pan American Airways pilot observed bril- liant pulsating light, confirmed by radar. [V]1
Section V has a lengthy account of the event:
March 29,1957: About 7:30 p.m. local time, Pan American flight 206A was north- bound off the east coast of Florida, at 30 degrees N. Latitude. The plane was enroute to New York from Nassau at 16,000 feet, moving through the tops of cumulus clouds, on a heading of 25 degrees magnetic. At the controls was Capt. Kenneth G. Brosdal, The engineer, John Wilbur, was in the co-pilot’s seat. The co-pilot, George Jacobson, was navigating.
“About 50 miles east of Papa-3, a checkpoint between Nassau and Tuna,” Capt. Bros- dal stated, “we (the co-pilot, engineer and myself) saw this very bright white light. It seemed to grow in intensity to the point where it would be about 3 or 4 strengths of a rising Venus, then would subside. This happened about 3 or 4 times, during which I came to enough to check on the radar screen. Sure enough, a target showed up at 3 o’clock between 45-50 miles away.
“Using the cursor on the face of the radar, I checked the angle of sighting and it checked with the visual angle. This light appeared to be stationary, or moving in a N.E. direction (same as us). I observed this on the scope long after the light went out. I checked with Miami ATC [Air Traffic Control] but no other traffic or firing was in the area, to their knowledge.” [40]
The radar set, tuned to the 50 mile range, tracked the unidentified target for 20 minutes. The visual observation lasted 4-5 minutes. “The blip on the scope,” Capt. Brosdal added, “indicated an apparent size in excess of the size of normal aircraft. The altitude of the light, on the basis of angle of sight and radar ranging, was estimated to be 20,000 to 25,000 feet.”
Capt. Brosdal indicated that he was most impressed by the exceptional intensity of the light during the bright phase of pulsation.2
This sounds good but there seems to be some missing information in the UFO evidence document.
Potential explanation
With a North-Northeast trajectory, a target at the 3 o’clock position would have been East-Southeast between 90-120 degrees. The fact that the object was reported to have been traveling along a parallel course gives one reason to suspect the visual sighting was a possible astronomical object.
. 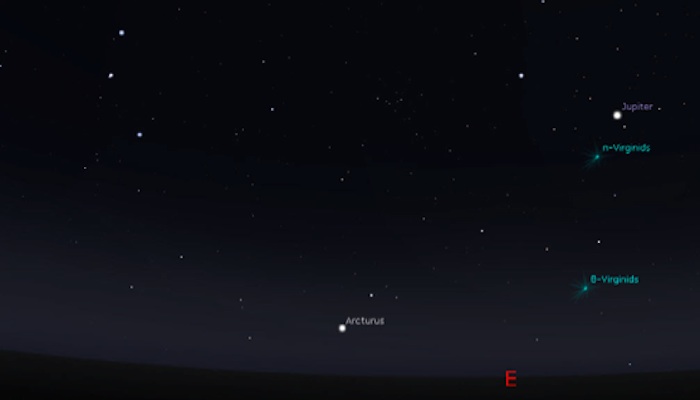 The first potential suspect was the bright star Arcturus at an azimuth of 70 de- grees and an elevation of 5 degrees. While this target is possible there is a more likely candidate. The bright planet Jupiter was at 105 degrees and an elevation of about 30 degrees. Since the pilots determined that the object was at a higher altitude than them, the object would have been at a significant angle of elevation. Jupiter seems to match this description. Any variations in brightness and subse- quent disappearance may have been related to the cumulus clouds mentioned by the crew.
. 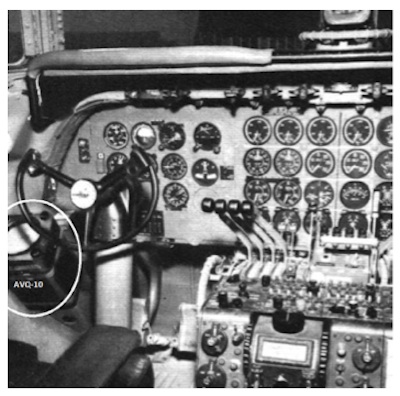 The radar question is the other issue here. What is forgotten is that just because a radar indicates there is a contact does not mean that it directly matches any visual observation. The radar appears to have been a weather radar (Probably the AVQ- 103), which was designed to monitor air turbulence and weather. The image to the left shows how the AVQ-10 was mounted on a DC-7C.4 The display was small and anything that would register on the display must have been a large target to register clearly. It is possible that what was seen on radar was nothing more than some sort of weather phenomena not related to the visual sighting.
Solved?
We can’t say it is solved without a time machine. However, it is not unreasonable to suggest that this might have been the planet Jupiter and an unrelated radar echo that created this sighting. One thing is certain, this is not the kind of evidence that proves that UFOs are some form of intelligently controlled craft piloted by extraterrestrials. This evidence is not as good as claimed by the NICAP document.
Quelle: SUNlite 2/2016
UFO-Forschung
« Zum vorherigen Eintrag Zum nächsten Eintrag »
2335 Views
Created with page4