A new study shows the interaction with Jupiter's magnetosphere when giant solar storms arrive at the planet.
.

CREDIT: X-RAY: NASA/CXC/UCL/W.DUNN ET AL, OPTICAL: NASA/STSCI
Solar storms trigger X-ray aurorae on Jupiter that are about eight times brighter than normal, a new study has found using data from NASA’s Chandra X-ray Observatory.
It is the first time that Jupiter’s northern and southern lights have been studied in X-ray light when a giant solar storm arrived at the planet.
The aurorae are hundreds of times more energetic than those on Earth and cover an area greater than the surface of the Earth.
While the Sun constantly ejects streams of particles in a so-called solar wind, causing aurorae on Jupiter, this becomes much stronger during a solar storm, or coronal mass ejection.
The stronger wind pushes Jupiter’s magnetosphere (the region of space controlled by the planet's magnetic field) inward by nearly two million kilometres, and the study found that the interaction at this boundary triggers the X-rays in Jupiter’s auroras.
The composite images above show Jupiter and its aurora during and after the arrival of particles from a giant coronal mass ejection in October 2011. X-ray data from Chandra (purple) is overlaid on an optical image from the Hubble Space Telescope.
On the left, we can see the X-ray activity when the coronal mass ejection reaches Jupiter. The image on the right shows what is happening two days later after the coronal mass ejection has subsided.
Scientists took the snapshot by monitoring X-rays emitted during two 11-hour observations, using the data to pinpoint the source of the X-ray activity.
Quelle: COSMOS
.
Update: 26.03.2016
.
Solar Wind Induces Jupiter’s X-ray Aurora 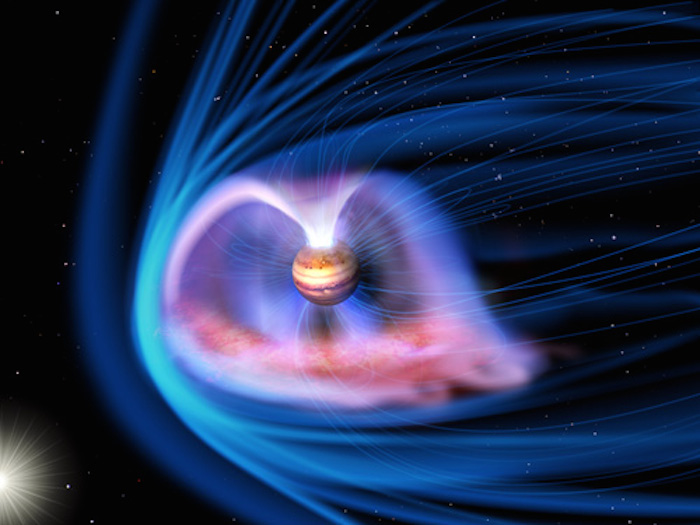 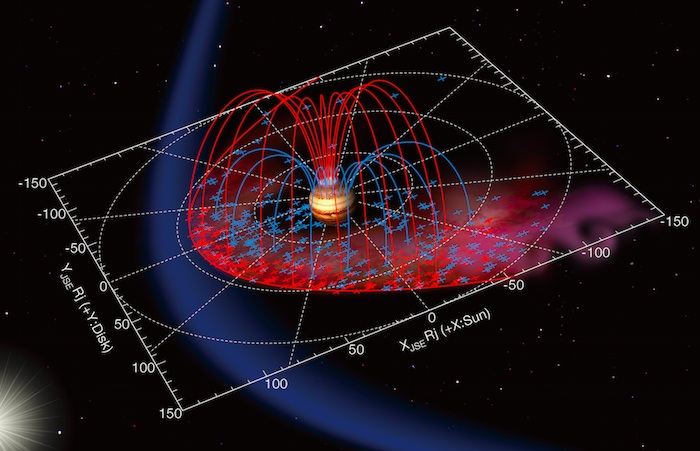