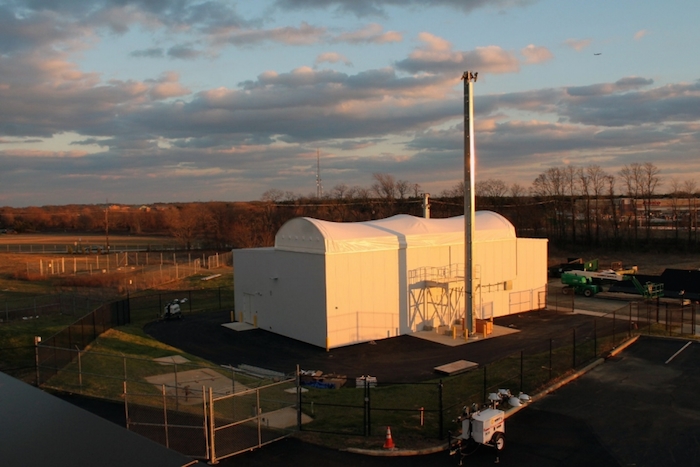 Off a busy suburban street near Philadelphia – and within sight of a popular shopping center – testing is underway for a system that will monitor hundreds of thousands of pieces of junk orbiting the Earth and threatening active satellites and the International Space Station.
The U.S. Air Force’s Space Fence marked a major accomplishment Jan. 30, 2016, after a scaled-down version of the end-item system recorded its first track of a satellite.
“First track is major milestone for us and represents that we have a functioning radar,” says Bruce Schafhauser, Space Fence Program Director for Lockheed Martin. “It’s the first time the end-to-end radar loop is closed and we track real objects in space. The first track and the new test facility means we are one step closer to delivering a dramatic tenfold improvement in space situational awareness and orbital monitoring capability.”
It’s a critical mission. The space station crew has conducted at least 25 avoidance maneuvers to avoid space junk. Space junk traveling at speeds of nearly eight miles per second passed the station four times in 2015.
Long before Space Fence begins S-band radar tracking of objects from its site on a narrow island in the middle of the Pacific Ocean, Lockheed Martin engineers and U.S. Air Force personnel are testing and training on a scaled-down version of the system from the comfort of New Jersey.
The test facility is used for early validation of hardware, firmware and software that will enable the Space Fence system to detect, track, and catalog orbital objects that facilitates the prediction and prevention of collisions in space. The test site will also provide early lessons learned on installation of the S-band ground-based radar, support maintenance training and allow engineers to test verification procedures.
“The main objective is to reduce risk of discovering something unexpected in the Marshall Islands – especially because we will be integrating a new radar system on a massive scale,” says Schafhauser. “Some things as simple as mechanical fit or installation sequence will be much better understood before we arrive on island.”
Air Force personnel are at the test facility running procedures as well, to prepare for formal acceptance testing the new system.
“Our strong partnership with the Air Force leads to learning and discovery on both sides,” Schafhauser explains. “The collaboration in the Moorestown facility drives great efficiencies before the installation and test commences on island.”
Space Fence will replace the existing Air Force Space Surveillance System, or VHF Fence, which has been in service since the early 1960s. Space Fence is a scalable solid-state S-band radar capable of detecting much smaller objects than the current system. Space Fence system’s accuracy and its persistent surveillance decreases orbital uncertainty to maintain custody of space objects and to alert operators of changes in the space environment. By using an open-architecture system, Space Fence can adapt to future missions requiring various tracking and coverage approaches. The inherent flexibility of the digital array radar allows for tasking in deep space simultaneous with un-cued surveillance mission.
Construction continues at the six-acre Space Fence site 2,100 miles southwest of Honolulu.  Forty-five hundred cubic yards of concrete now form the foundation of the sensor site and the start of vertical ring walls that will support the air inflated Kevlar roof that provides transparency to radio frequency (RF) transmissions.
The test facility will remain in place so that teams can provide long-term support after the system is operational on Kwajalein in 2018.
Quelle:Lockheed Martin
Raumfahrt
« Zum vorherigen Eintrag Zum nächsten Eintrag »
2485 Views
Created with page4