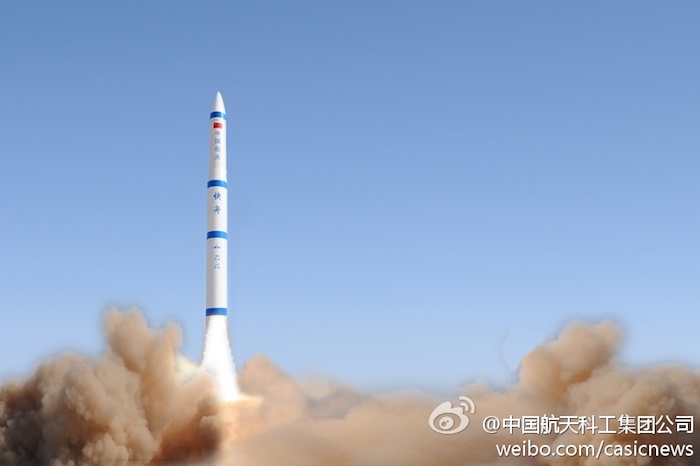 China will establish a commercial rocket development and launch company, a scientist with a state-owned space technology enterprise said Tuesday.
Hu Shengyun, chief model designer of China Sanjiang Space Group (CSSG), said that Kuaizhou-11, the company's latest carrier rocket, is scheduled to conduct a commercial launch in 2017.
Hu, also a national legislator, told Xinhua on the sidelines of the annual legislature session that the company has been planning to set up a dedicated company as part of the commercialization of the Kuaizhou series carrier rockets. The undertaking has attracted the attention of certain Internet giants.
CSSG, which is located in central China's Hubei Province, launched Kuaizhou-1 and Kuaizhou-2 solid-fuelled carrier rockets in 2013 and 2014. Kuaizhou means speedy vessel in Chinese.
Commercial use in space industry is a huge market. In the United States, commercial satellites account for more than a half of the satellites in orbit. China, however, has yet to secure a sizable space for itself in the market.
"Commercialization can help us make our mark in the market,as it will reduce the cost in satellite development and launch services," added Hu.
Quelle: Xinhua
Raumfahrt
« Zum vorherigen Eintrag Zum nächsten Eintrag »
2243 Views
Created with page4