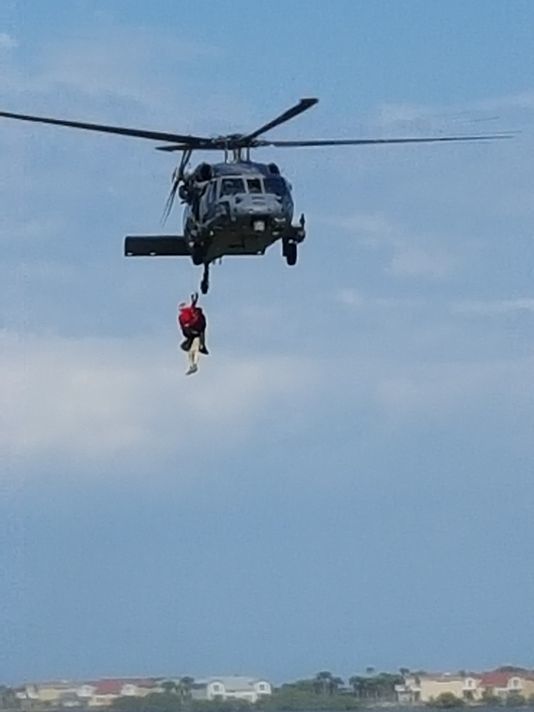 Air Force pararescuemen, or PJs, lift a simulate astronaut from the Banana River into an HH-60G Pave Hawk helicopter during a training exercise on Monday afternoon.
(Photo: Matt Reed/FLORIDA TODAY)Buy Photo
-
A hovering HH-60G Pave Hawk helicopter kicked up spray from the Banana River on Monday afternoon as a rescue crew lifted a person from the water with a tether.
The simulated rescue operation demonstrated how the Air Force’s 45th Space Wing and 920th Rescue Wing would react if astronauts had to abort a launch from the Space Coast and ended up in the ocean.
That scenario could play out in less than two years, if Boeing or SpaceX capsules are ready to launch NASA crews from Cape Canaveral to the International Space Station, or when NASA launches crews from Kennedy Space Center in an Orion exploration capsules, starting by 2023.
“That’s one of our primary responsibilities, is contingency rescue for NASA,” said Maj. Christopher Slauson of the 45th Space Wing’s Detachment 3.
In January, teams practiced a similar rescue exercise about 10 miles off shore in the Atlantic Ocean.
Monday’s test more closely simulated a “pad abort” scenario in which a capsule jettisons from a rocket failing on the pad, dropping astronauts and their capsule close to shore.
There, if possible, they would open their hatch and deploy a life boat.
A little after 3 p.m. Monday, a quartet of Air Force pararescuemen, or PJs, parachuted from a C-130 aircraft into the river along with an inflatable boat.
After the jumpers reached the “astronauts” — two Air Force colonels  in an inflatable orange raft — the Pave Hawks swooped in to begin the rescue.
In pairs, a PJ and an astronaut were hoisted into the helicopters, which banked away as if transporting the crew to their next stop. The process took about 15 minutes.
Afterward, the C-130 returned for an in-air fueling demonstration with the Pave Hawks.
Maj. Gen. Heidi Brown, the director of global operations from U.S. Strategic Command at Offutt Air Force Base in Nebraska, was a special guest observing the exercise.
The Air Force’s Detachment 3, part of the 45th Operations Group, supports all of NASA’s human spaceflight missions, even those launching on Russian Soyuz rockets.
The unit will support future Orion launches but only play a role in Boeing or SpaceX missions that are part of NASA’s Commercial Crew Program if an emergency forces them to miss their planned landing sites.
SpaceX initially plans to land crews in Dragon capsules under parachutes in the Pacific Ocean, like its cargo Dragon capsules land now, while developing systems for land landings.
Boeing’s CST-100 Starliner capsules will target landings on land with airbags in the Western United States.
“There’s so much planning and training and coordination that goes into a mission like this,” said Slauson. “This exercise is just one example of what we’ve been doing to get some real-world experience with the procedures that we’ve been developing.”
Everything went according to plan Monday, and the simulation was considered a success.
Quelle: Florida Today
Raumfahrt
« Zum vorherigen Eintrag Zum nächsten Eintrag »
2392 Views
Created with page4