The hummingbird glyph and its surroundings in the Nasca world heritage site as seen by standard photography, left, and by NASA's UAVSAR instrument, right. Dark areas in the UAVSAR image are where the site has been disturbed.
Credits: Left: © 2015 Google, Digital Globe. Right: NASA/JPL-Caltech 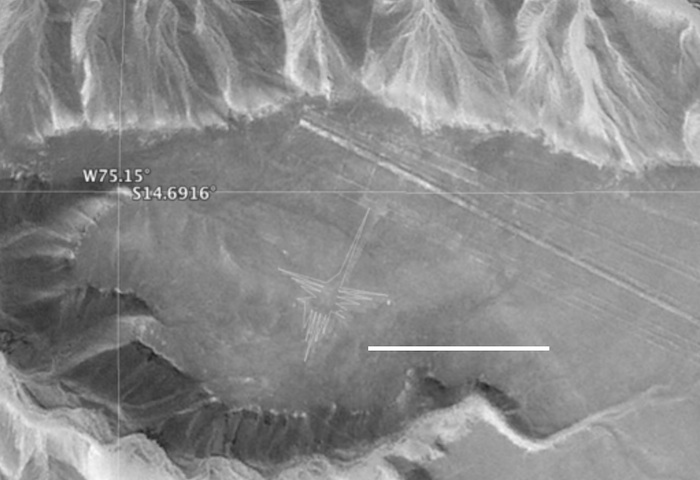 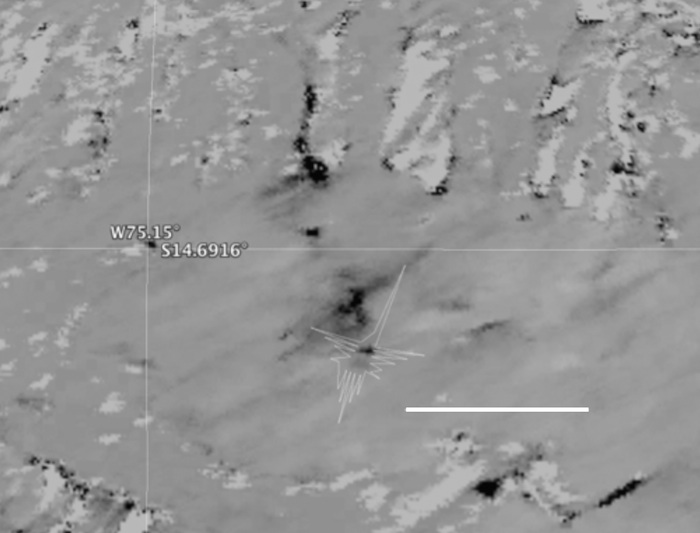 In just two 10-minute overflights, an airborne NASA synthetic aperture radar proved it could pinpoint areas of disturbance in Peru's Nasca lines World Heritage Site. The data collected on the two flights will help Peruvian authorities fully catalog the thousand-year-old designs drawn on the ground in and around the site for the first time, as well as giving them a new tool for protecting the fragile constructions from both careless humans and natural disturbances such as floods.
The left frame shows a portion of the mesa-top site in a Google Earth image. Drainage gullies circle the mesa where the Nasca people constructed lines several miles long, enormous polygons, and animal figures simply by moving rocks. A shape called the Hummingbird is faintly visible above and to the left of the scale line, its long beak ending below a road that cuts diagonally from the right edge of the image to the center.
In the synthetic aperture radar image of the same site, right, areas of disturbance appear dark. There are extensive areas of disturbance around the Hummingbird as well as a pathway down the gully directly above the glyph. Other small disturbances may have been caused by erosion in the dry creek beds.
NASA's Uninhabited Aerial Vehicle Synthetic Aperture Radar (UAVSAR), developed and managed by the Jet Propulsion Laboratory, Pasadena, California, can record changes on the ground beneath the aircraft that occur between multiple flights, which take exactly the same flight path. The instrument is used to monitor how volcanoes, earthquakes, and other natural hazards are changing Earth. Principal investigator Bruce Chapman of JPL noted that UAVSAR is ideally suited for observing the Nasca site because the region has virtually no vegetation and receives no rainfall whatsoever in most years, meaning that natural disturbances are minimal.
This and other UAVSAR images of the site appear in a paper in the journal Conservation and Management of Archaeological Sites. Chapman's coauthors are Douglas Comer, Cultural Site Research and Management, Baltimore, Maryland; Johny Isla, Ministry of Culture, Peru; and Helaine Silverman, University of Illinois, Urbana-Champaign.
Quelle: NASA
Planet Erde
« Zum vorherigen Eintrag Zum nächsten Eintrag »
2519 Views
Created with page4