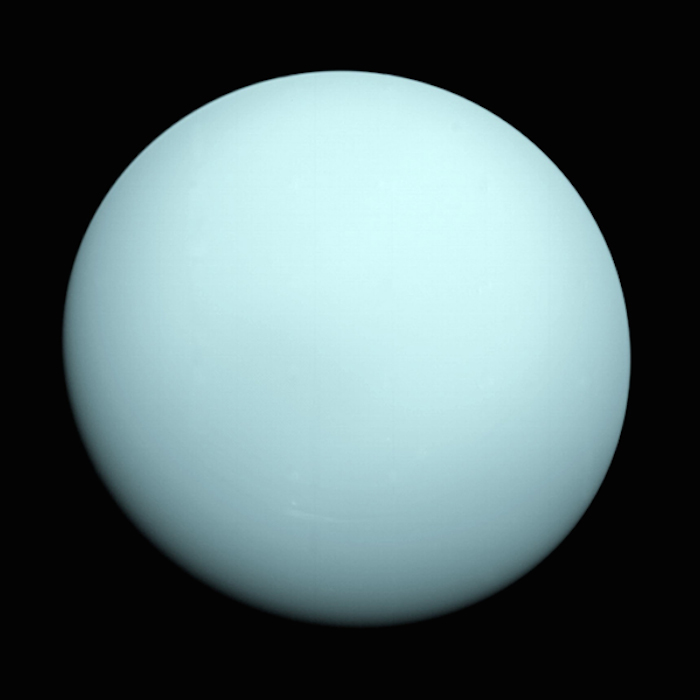 Voyager 2 discovered 10 new moons during its encounter with UranusVoyager observed the expansive rings of UranusArriving at Uranus in 1986, Voyager 2 observed a bluish orb
Uranus' icy moon Miranda wowed scientists during the Voyager encounterVoyager 2 captured this moody parting shot of UranusThe false-color and contrast-enhanced image of Uranus at right reveals
Arriving at Uranus in 1986, Voyager 2 observed a bluish orb with extremely subtle features. A haze layer hid most of the planet's cloud features from view. Credit: NASA/JPL-Caltech
.
Humanity has visited Uranus only once, and that was 30 years ago. NASA's Voyager 2 spacecraft got its closest look at the mysterious, distant, gaseous planet on Jan. 24, 1986.
Voyager 2 sent back stunning images of the planet and its moons during the flyby, which allowed for about 5.5 hours of close study. The spacecraft got within 50,600 miles (81,500 kilometers) of Uranus during that time.
"We knew Uranus would be different because it's tipped on its side, and we expected surprises," said Ed Stone, project scientist for the Voyager mission, based at the California Institute of Technology, Pasadena. Stone has served as project scientist since 1972, continuing in that role today.
Uranus revealed itself to be the coldest planet known in our solar system, even though it's not the farthest from the sun. This is because it has no internal heat source.
Scientists determined that the atmosphere of Uranus is 85 percent hydrogen and 15 percent helium. There was also evidence of a boiling ocean about 500 miles (800 kilometers) below the cloud tops.
Scientists found that Uranus has a magnetic field different from any they had ever encountered previously. At Mercury, Earth, Jupiter and Saturn, the magnetic field is aligned approximately with the rotational axis.
"Then we got to Uranus and saw that the poles were closer to the equator," Stone said. "Neptune turned out to be similar. The magnetic field was not quite centered with the center of the planet."
This surface magnetic field of Uranus was also stronger than that of Saturn. Data from Voyager 2 helped scientists determine that the magnetic tail of Uranus twists into a helix stretching 6 million miles (10 million kilometers) in the direction pointed away from the sun. Understanding how planetary magnetic fields interact with the sun is a key part of NASA's goal to understand the very nature of space. Not only does studying the sun-planet connection provide information useful for space travel, but it helps shed light on the origins of planets and their potential for harboring life.
Voyager 2 also discovered 10 new moons (there are 27 total) and two new rings at the planet, which also proved fascinating. An icy moon called Miranda revealed a peculiar, varied landscape and evidence of active geologic activity in the past. While only about 300 miles (500 kilometers) in diameter, this small object boasts giant canyons that could be up to 12 times as deep as the Grand Canyon in Arizona. Miranda also has three unique features called "coronae," which are lightly cratered collections of ridges and valleys. Scientists think this moon could have been shattered and then reassembled.
Mission planners designed Voyager 2's Uranus encounter so that the spacecraft would receive a gravity assist to help it reach Neptune. In 1989, Voyager 2 added Neptune to its resume of first-ever looks.
"The Uranus encounter was very exciting for me," said Suzanne Dodd, project manager for Voyager, based at NASA's Jet Propulsion Laboratory, Pasadena, California, who began her career with the mission while Voyager 2 was en route to Uranus." It was my first planetary encounter and it was of a planet humanity had never seen up close before. Every new image showed more details of Uranus, and it had lots of surprises for the scientists. I hope another spacecraft will be sent to explore Uranus, to explore the planet in more detail, in my lifetime."
Voyager 2 was launched on Aug. 20, 1977, 16 days before its twin, Voyager 1. In August 2012, Voyager 1 made history as the first spacecraft to enter interstellar space, crossing the boundary encompassing our solar system's planets, sun and solar wind. Voyager 2 is also expected to reach interstellar space within the next several years.
. 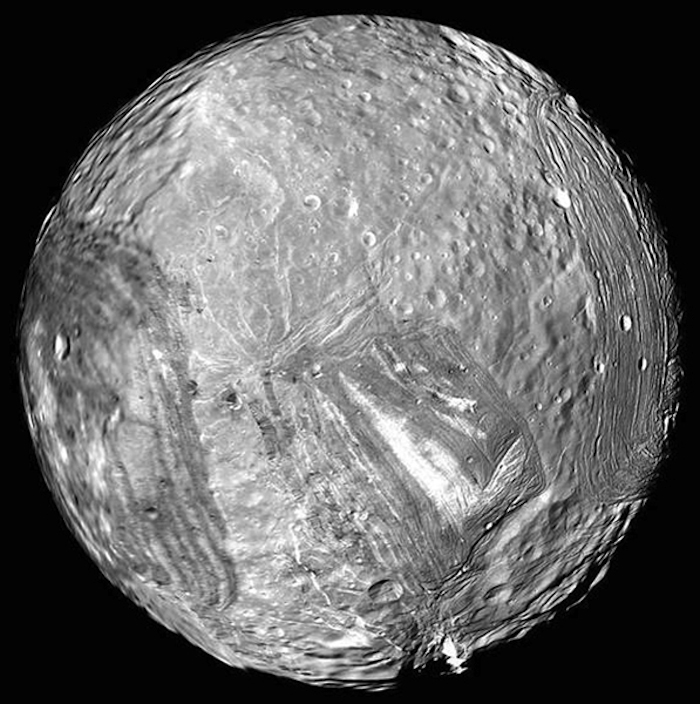 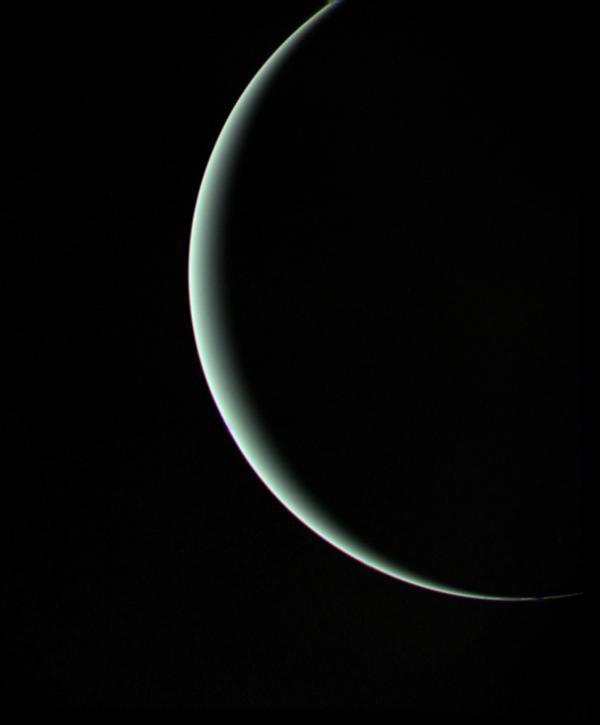 This view of Uranus was recorded by Voyager 2 on Jan 25, 1986, as the spacecraft left the planet behind and set forth on the cruise to Neptune Voyager was 1 million kilometers (about 600,000 miles) from Uranus when it acquired this wide-angle view. The picture -- a color composite of blue, green and orange frames -- has a resolution of 140 km (90 mi). The thin crescent of Uranus is seen here at an angle of 153 degrees between the spacecraft, the planet and the Sun. Even at this extreme angle, Uranus retains the pale blue-green color seen by ground-based astronomers and recorded by Voyager during its historic encounter. This color results from the presence of methane in Uranus' atmosphere; the gas absorbs red wavelengths of light, leaving the predominant hue seen here. The tendency for the crescent to become white at the extreme edge is caused by the presence of a high-altitude haze Voyager 2 -- having encountered Jupiter in 1979, Saturn in 1981 and Uranus in 1986 -- will proceed on its journey to Neptune. Closest approach is scheduled for Aug 24, 1989. The Voyager project is managed for NASA by the Jet Propulsion Laboratory.
. 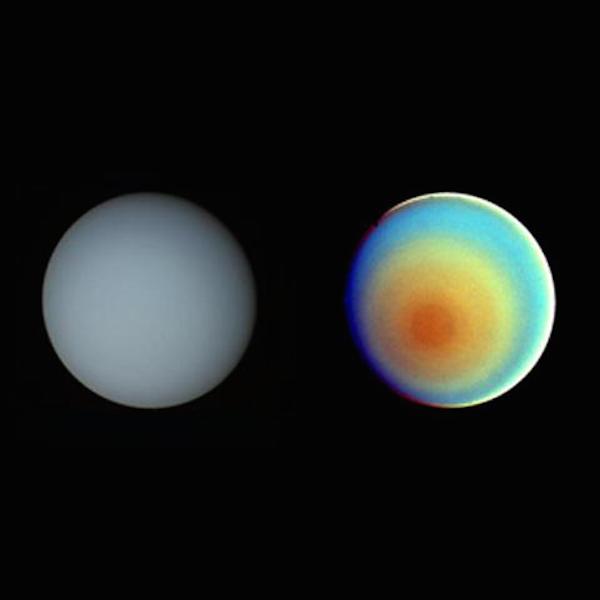 These two pictures of Uranus -- one in true color (left) and the other in false color -- were compiled from images returned Jan. 17, 1986, by the narrow-angle camera of Voyager 2. The spacecraft was 9.1 million kilometers (5.7 million miles) from the planet, several days from closest approach. The picture at left has been processed to show Uranus as human eyes would see it from the vantage point of the spacecraft. The picture is a composite of images taken through blue, green and orange filters. The darker shadings at the upper right of the disk correspond to the day-night boundary on the planet. Beyond this boundary lies the hidden northern hemisphere of Uranus, which currently remains in total darkness as the planet rotates. The blue-green color results from the absorption of red light by methane gas in Uranus' deep, cold and remarkably clear atmosphere. The picture at right uses false color and extreme contrast enhancement to bring out subtle details in the polar region of Uranus. Images obtained through ultraviolet, violet and orange filters were respectively converted to the same blue, green and red colors used to produce the picture at left. The very slight contrasts visible in true color are greatly exaggerated here. In this false-color picture, Uranus reveals a dark polar hood surrounded by a series of progressively lighter concentric bands. One possible explanation is that a brownish haze or smog, concentrated over the pole, is arranged into bands by zonal motions of the upper atmosphere. The bright orange and yellow strip at the lower edge of the planet's limb is an artifact of the image enhancement. In fact, the limb is dark and uniform in color around the planet. The Voyager project is managed for NASA by the Jet Propulsion Laboratory.
. 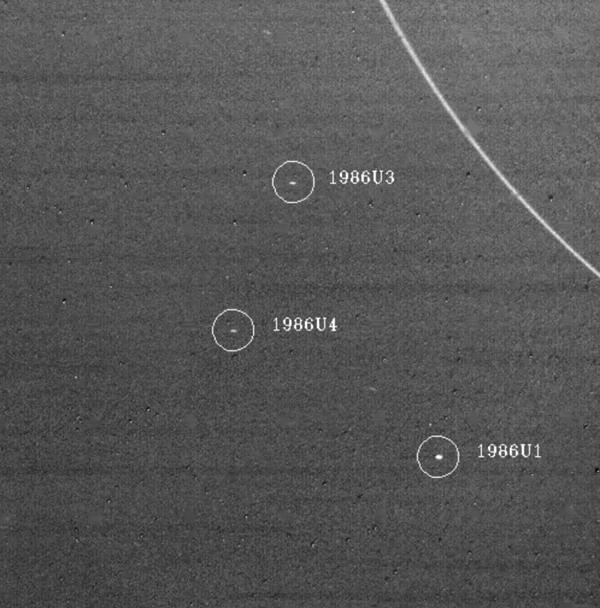 Three of the newly discovered satellites of Uranus are captured in this Voyager 2 image taken Jan. 18, 1986, when the spacecraft was 7.7 million kilometers (4.8 million miles) from the planet. All three lie outside the orbits of Uranus nine known rings, the outermost of which, the epsilon ring, is seen at upper right. The largest of the three moons viewed here, 1986U1, was discovered Jan. 3; it is an estimated 90 km (55 mi) across and orbits Uranus once every 12 hours 19 minutes at a distance of 66,090 km (41,040 mi) from the planet's center. The other two moons are slightly smaller. 1986U3 orbits once every 11 hours 6 minutes at 61,750 km (38,350 mi), 1986U4 every 13 hours 24 minutes at 69,920 km (43,420 mi). They were discovered on Jan. 9 and 13, respectively. Long exposures were required to bring out these small objects; thus, as a result of the relative motions of the spacecraft and the moons, they appear slightly elongated. The Voyager project is managed for NASA by the Jet Propulsion Laboratory.
. 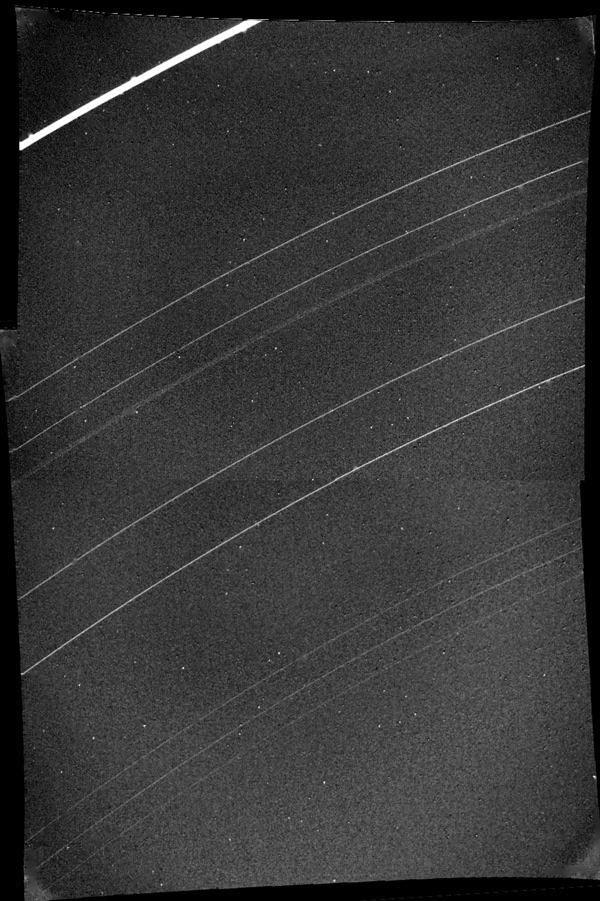 A newly discovered tenth ring of Uranus is barely visible near the top of this two-frame Voyager 2 mosaic. The frames composing this picture were obtained Jan. 23, 1986, from a distance of 1.12 million kilometers (690,000 miles). The tenth ring is about midway between the bright, outermost epsilon ring and the next ring down, called delta. The tenth ring, the first such feature discovered by Voyager, orbits Uranus at a radius of about 50,000 km (30,000 mi). This places the ring close to the orbit of the recently discovered 'shepherd' satellite 1986U7. All nine of the previously known rings of Uranus are visible: epsilon, delta, gamma, eta, beta, alpha, 4, 5 and 6 (from top). This image has been processed to enhance narrow features; the resolution is roughly 10 km (6 mi). Both a bright, narrow inner component and a fainter, extended outer component of the eta ring are distinct in this view. The epsilon ring -- which at this location achieves its maximum width of 100 km (60 mi) -- and the broad component of the eta ring are the only features resolved here. The Voyager project is managed for NASA by the Jet Propulsion Laboratory.
Quelle: NASA
Raumfahrt
« Zum vorherigen Eintrag Zum nächsten Eintrag »
3220 Views
Created with page4