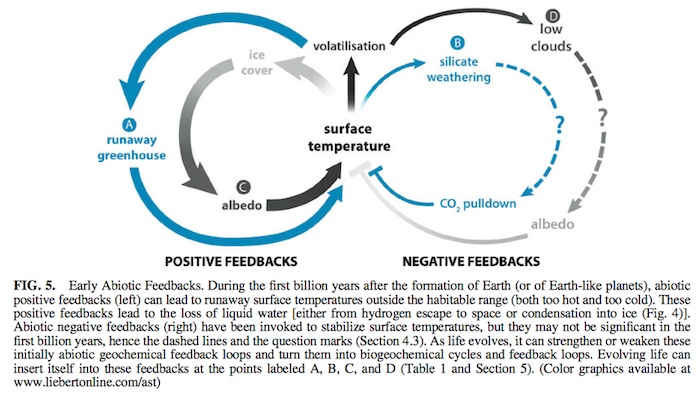 the more modern, larger values of 1.5–1.7 AU (e.g., Kasting et al., 1993; Kopparapu et al., 2013).
Since the temperature-dependent carbonate-silicate cycle provides a negative feedback, it could have been responsible for the long-term stabilization of Earth’s surface temperature. With a sufficiently high silicate weathering rate, even a lifeless planet could remain habitable. However, since temperature- dependent silicate weathering requires sub-aerial weathering of silicate rocks (either granitic or basaltic), the magnitude of the negative feedback of silicate weathering is roughly pro- portional to the amount of sub-aerial continental crust. In the first billion years of Earth’s history, the fraction of the surface of Earth where sub-aerial erosion would have been possible may have been extremely small (Flament et al., 2008; Abbot et al., 2012; Dhuime et al., 2015). Flament et al. (2008) modeled the sub-aerial weathering as a function of time and estimated that in the late Archean (*2.5Gya) 2–3% of the Earth’s surface was sub-aerial continent.
The little continental crust present was largely submerged. Thus, it is likely that early in Earth’s history the negative feedback of the carbonate-silicate cycle may have been inop-
erative or at least significantly less effective than today. This undermines the main negative feedback mechanism proposed to stabilize surface temperature on wet rocky planets for the first billion years or so, when they are most likely to experience runaway greenhouse or runaway glaciation due to high in- ventories of primordial greenhouse gases, higher bombard- ment rates, and higher volcanism; hence, the ‘‘?’’ associated with this negative feedback loop in Fig. 5 and Table 1. Without this abiotic feedback cycle to extend the outer edge of the CHZ, the much narrower Hart-like continuously habitable zone (Fig. 6B) becomes more plausible.
The other abiotic negative feedback on surface temperature shown in Fig. 5 is associated with low clouds: higher temper- atures / more volatilization / more low-altitude clouds / higher albedo / lower temperatures. Low clouds increase albedo and decrease surface temperatures more than they contribute toward raising the surface temperature because of the greenhouse effect associated with clouds (Abe et al., 2011). This is problematic because increasing volatilization produces both more low-altitude clouds, which could cool Earth due to their higher albedo, and more high-altitude clouds, which could
. 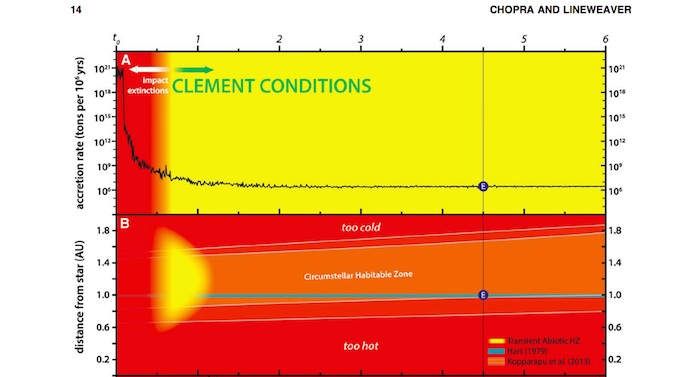 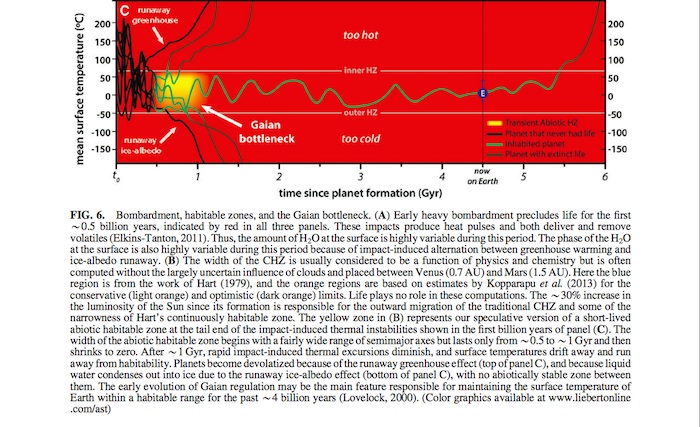 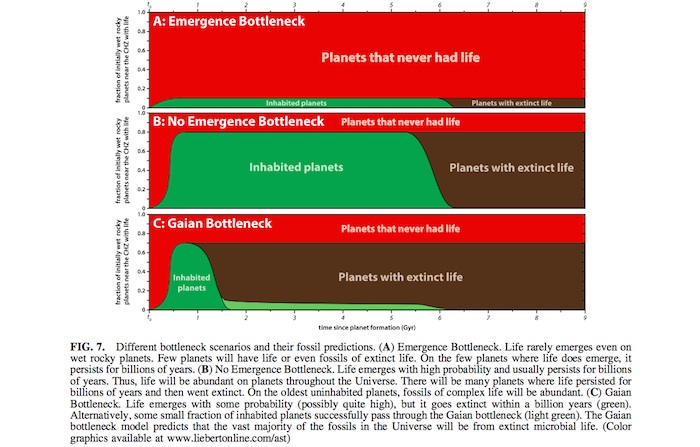