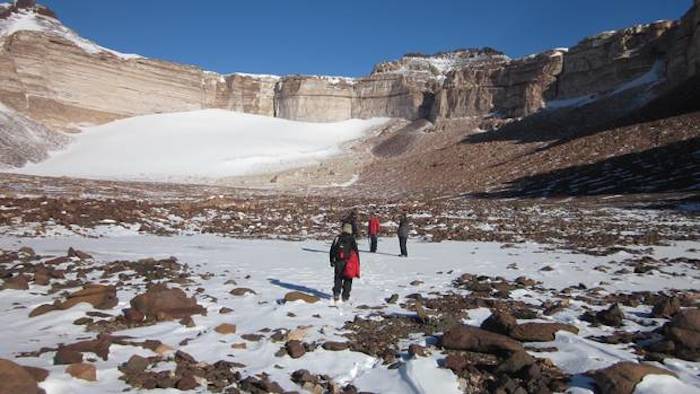 Jacqueline Goordial and her colleagues discovered a near-total absence of microbes in University Valley in Antarctica.
(Jacqueline Goordial)
.
When Jacqueline Goordial first laid eyes on University Valley in Antarctica, it looked like the loneliest place on Earth.
It would take her five years to prove it.
“It’s really desolate,” the McGill University researcher said. “There are no insects, no plants, no birds flying through the area. I’ve never been anywhere so silent.”
Dr. Goordial and her colleagues still expected to find one kind of life – bacteria – showing up in relative abundance in the valley’s permafrost. Instead, they discovered a near-total absence of microbes there. They suggest the site might lie on the far side of a “fundamental threshold,” an environment that even the most tenacious organisms cannot hope to conquer.
The finding, published Tuesday in the Journal of the International Society for Microbial Ecology, raises provocative questions about evolution’s limits. And it has sobering implications for the effort to search for life on Mars, a planet that has much in common with University Valley.
“It took us a year to wrap our heads around the idea that maybe this location was special,” said Lyle Whyte, an environmental microbiologist who supervised Dr. Goordial’s PhD research in Antarctica. “We went into this thinking that we would detect some kind of active microbial ecosystem.”
Dr. Whyte’s lab at McGill is known for uncovering life in the chilliest places. In 2013, he and his team identified the coldest living organism known, a soil-dwelling bacterium found on Ellesmere Island that can remain metabolically active down to -25 C.
In contrast, University Valley seems to present life with a challenge too great. The high-altitude valley lies in a mountainous region that is known for being particularly arid. Although the temperature never ventures above the freezing point, extreme dryness keeps the site mostly snow-free, conditions that are thought to have persisted there for the past 150,000 years.
The floor of the valley consists of a loose permafrost that has the texture of coarse sand. Below that, the permafrost becomes hard, not from water frozen solid but from water vapour drifting in and cementing the grains together.
Using the same techniques that Dr. Whyte perfected elsewhere, Dr. Goordial began her study by examining two core samples drilled out from this lower zone of hard permafrost.
But after more than 1,000 attempts to detect something living in the permafrost, she came up with only a handful of organisms in the core samples. Those could have migrated into the valley on the wind and persisted in a frozen state – alive, technically speaking, but not as part of a viable ecosystem.
Screening the samples for any DNA that might be present turned up genes that promoted dormancy, Dr. Goordial said, implying that suspended animation may be the only survival option for a bacterium that winds up in University Valley. And unless environmental conditions change, even that option can only end in a long-delayed death.
Exactly why life is so stymied by the site is not clear, Dr. Whyte said, but he added that cold temperatures alone would not be expected to have such an effect. Instead, it must be a combination of factors, including the extreme dryness and possible a lack of nutrients in the soil that can support microbial activity.
In 2013, Dr. Goordial travelled to the valley to acquire more core samples and to see whether she could measure any traces of methane or carbon dioxide coming in or out of the ground – signs of a microbial community that may have escaped direct detection – but she found none.
The researchers note their methods may simply not be sensitive enough to identify a functioning ecosystem at the site. But if so, that ecosystem would have to be functioning at an extremely low level, out of reach of current technology.
The result is a sobering one for Mars researchers, who are planning to explore the Red Planet for signs of life in the coming years by using probes equipped with similar technology. University Valley is considered to be an analogue for the northern plains of Mars, where NASA’s Phoenix spacecraft touched down in 2008 and found permafrost under the soil.
“If there is life on Mars, that life will have to be different in some way from Earth life in order to survive,” said Corien Bakermans, a microbiologist at Pennsylvania State University who was not involved in the McGill study. She added that the work would help researchers understand how long evidence of past life might be expected to linger on Mars and other locations in the solar system.
Quelle: The Globe and Mail
Planet Erde
« Zum vorherigen Eintrag Zum nächsten Eintrag »
2441 Views
Created with page4