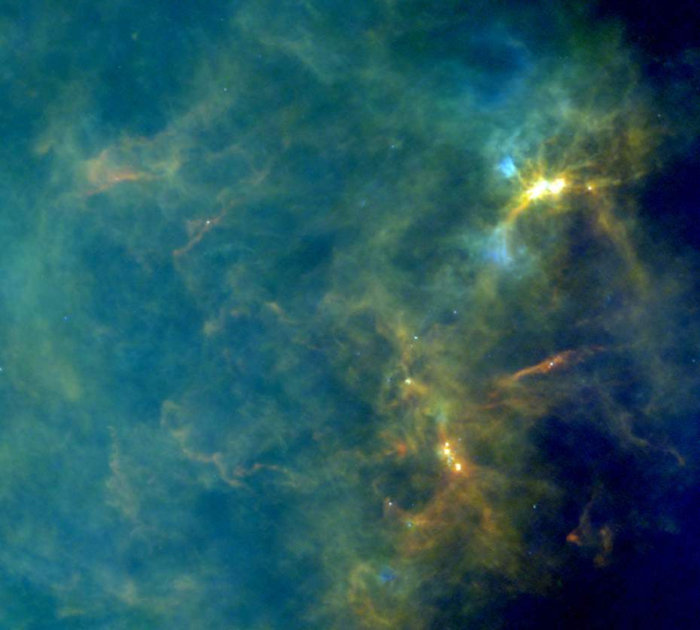 The intricate jumble depicted in this image from ESA’s Herschel space observatory shows the distribution of gas and dust in the Taurus Molecular Cloud, a giant stellar nursery about 450 light-years away in the constellation Taurus, the Bull.
Launched in 2009, Herschel studied the sky at far-infrared wavelengths for almost four years, detecting the glow of cosmic dust in the interstellar medium that pervades our Galaxy, the Milky Way. Dust is a minor but crucial ingredient in this diffuse mixture that provides the raw material for stars to form.
One of the observatory’s most striking discoveries was the detection of ubiquitous filaments – elongated and thin structures of gas and dust weaving their way across the Galaxy. Interstellar filaments were already known before Herschel, but the new data revealed them almost everywhere in the Milky Way and highlighted their role as preferred hubs for stellar birth.
Astronomers now believe that filaments precede the onset of most star formation, funnelling interstellar gas and dust into increasingly denser concentrations. Gravity later causes the densest filaments to contract and fragment, eventually leading to the formation of stars.
This image shows a tangle of filaments emerging from the cloud material, which are dotted with a few compact, bright cores: the seeds of future stars. The view also reveals a network of smaller threads, perpendicular to the most prominent filament.
This pattern is suggestive of accretion flows, indicating that the material along filaments is not at all static and that the most massive among them might be drawing matter from their surroundings. Some numerical simulations of star formation in molecular clouds also predict a similar arrangement of interstellar material, with gas and dust streaming towards the densest filaments along routes that are shaped by the local magnetic field.
This three-colour image combines Herschel bands at 160 microns (blue), 250 microns (green) and 500 microns (red), and spans about 5º on the long side. The data were acquired with Herschel as part of the Gould Belt survey Key Programme in 2010 and 2012, and a study of the filamentary structure is presented in a paper by P. Palmeirim et al. 2013. The image was first published on ESA’s Science and Technology website in May 2015.
Quelle: ESA
Astronomie
« Zum vorherigen Eintrag Zum nächsten Eintrag »
2663 Views
Created with page4