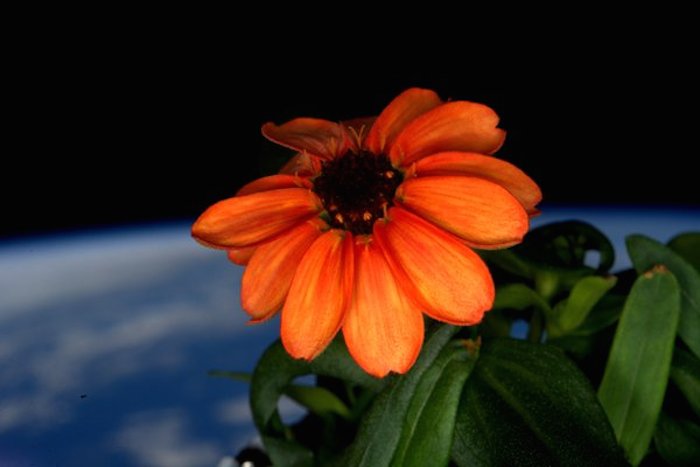 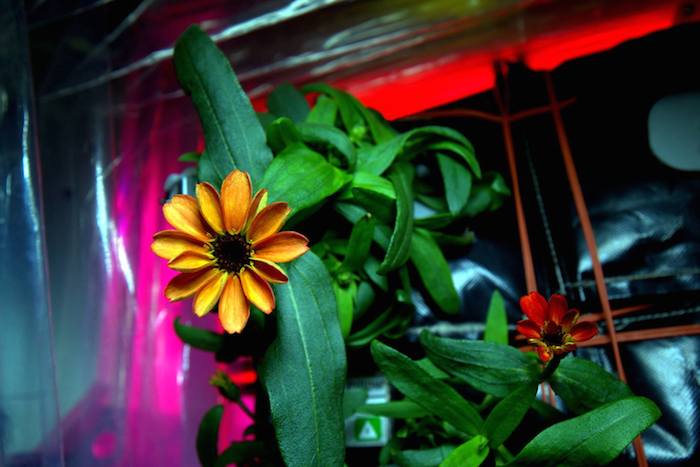 Commander Scott Kelly tweets photos of the first ever space flowers, zinnias, which bloomed on Jan. 16.
-
Plants to the rescue!
The zinnias bloomed, Commander Scott Kelly announced with a tweet. “Yes, there are other life forms in space!” he joked on Jan. 16. NASA astronaut Kjell Lindgren activated the growth of zinnia plants on Nov. 16, 2015, as part of an experiment in the Vegetable Production System (VEGGIE), a facility that will help scientists learn how to grow fresh produce on orbit for the agency’s journey to Mars. Lindgren’s work with the zinnias was continued by Kelly after Lindgren’s departure. They are using red, green, and blue LED lights 10 hours a day to stimulate growth of the plants.
The countermeasure to sensory monotony is sensory stimulation. Working with plants provides astronauts visual, tactile and olfactory stimulation, and eventually even salivary stimulation with fresh foods and variety.
"It was surprising to me how great soybean plants looked," NASA astronaut Peggy Whitson wrote in one of her Letters Home while she was aboard the space station. "I guess seeing something green for the first time in a month and a half had a real effect. I think it's interesting that my reaction was as dramatic as it was."
Another space gardener, NASA astronaut Don Pettit, conducted his own personal experiments with growing plants in space during Expedition 30/31
“I grew three plants on my last mission,” Pettit said. “Space zucchini, and then he had his buddy space broccoli. And then there was space sunflower.”
To enhance his fun, he even wrote a blog from the point of view of space zucchini.
Experiments involving space plants have been a favorite of astronauts, especially those staying in space for long periods of time. VEGGIE is the biggest plant/flower experiment to fly on the orbiting laboratory. Furthermore, the behavioral health team cites that another important countermeasure to sensory deprivation is the importance of being involved in meaningful work. Several astronauts agree that the ability to watch plants grow, and to play a part in their growth, provides a strong connection to something bigger than their immediate surroundings. Astronaut Mike Foale of ISS Expedition 8 said he loved working with plants while on the station. Every morning he would get up and look at the plants “for about 10 to 15 minutes. It was a moment of quiet time.”
.
The space zinnias gave Kelly a little scare as the year came to an end. He tweeted on Dec. 27 that they “aren’t looking too good,” and he is going to have to channel his “inner Mark Watney.” It turned out traces of mold were found on the plants. By Jan. 8 he tweeted again saying they are on the rebound and “no longer looking sad.”
“Growing a flowering crop is more challenging than growing a vegetative crop such as lettuce,” said Gioia Massa, NASA Kennedy Space Center payload scientist for VEGGIE. “Lighting and other environmental parameters are more critical.”
Lessons learned from the zinnia study will be used to help with the next flowering plant experiment in 2017, this one with an edible outcome—tomatoes!
. 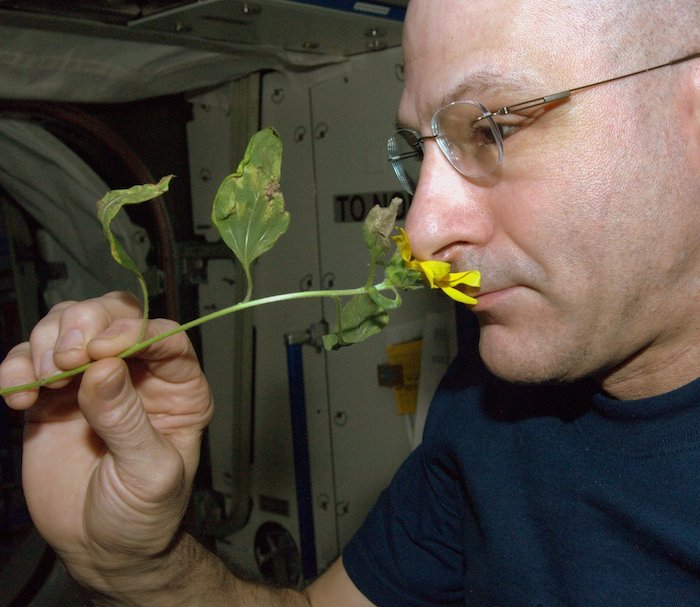 NASA astronaut Don Pettit grew a zucchini plant during his time aboard the International Space Station for Expedition 30/31. He blogged about the experience in his “Letters to Home.”
Quelle: NASA