The habitability of other worlds
New methods allow precise measurements of the gravity of stars and the size of exoplanets
-
How much we weigh on a planet depends on its surface gravity. Gravity is an important parameter for stars as well, and changes drastically over the course of a star’s lifetime, providing information on its age and stage of evolution. Since the stars in the night sky appear only as small spots of light, this value is very difficult to measure. A team of scientists from the Max Planck Institute for Solar System Research in Göttingen, the University of Vienna and from Canada, France and Australia have now developed a new method which can be used to determine the gravity on the surface of distant stars, accurate to within a few percent. It also allows better determination of the size and the habitability of exoplanets.
. 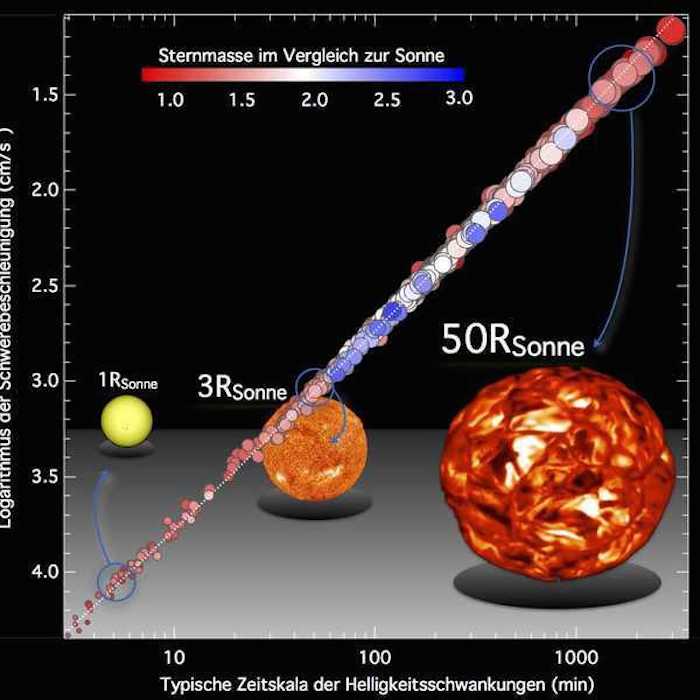 Stars in the diagram: The typical timescale of the acoustic oscillations and convective motions of a star provides information about the gravity at its surface. At the bottom left are stars like our Sun with very strong gravity and short oscillation and convection timescales. Over their lifetime, the stars move towards longer and longer timescales and thus weaker gravity. The radii of the stars change drastically in this process. At the top right are the red giant stars which are about 50 times the size of our Sun.
© Thomas Kallinger
-
In recent years, astronomers have discovered thousands of planets around distant stars (exoplanets), most of them by using the transit method. This entails searching for the variations in brightness which occur when planets transit in front of their parent star, blocking out part of the starlight as they do so. The size of a planet can be derived from the light curve – but always only relative to the size of its star.
In order to find out whether a newly discovered planet is similar to Earth, or whether it is a gaseous giant like Jupiter, for example, researchers must have accurate information about the properties of the star. The size of the star and ultimately that of the planet too can be derived from the gravitational force.
Until now, exact gravity measurements were possible only for a very small number of relatively bright stars. As the astronomers now report in Science Advances, the new method enables them to determine the surface gravity of stars which are much fainter with almost constant accuracy.
The method uses the minimal brightness variations in the starlight. Although the brightness of the stars in the night sky appears constant at first sight, it is nevertheless subject to measurable variations: acoustic oscillations in the interior of a star change the amount of light radiated, as do convective motions – hot gas bubbles rise then sink again after they have cooled down.
Both phenomena are directly influenced by the surface gravity of the star. They can therefore be used to measure the gravity, which is derived from the mass and the radius of the star.
Lead author Thomas Kallinger from the University of Vienna explains that it is not necessary to look into space to observe these phenomena. We can simply look at what happens in our own kitchen: “If water is heated in a pan, it rises from the bottom to the surface, where the heat transported is transferred to the air. The liquid sinks again, and the cycle starts once again.”
This circulation transports energy and is called convection. It also takes place in the layers beneath the solar surface, among other places, and similarly in most stars in our galaxy.
In order to be able to investigate the acoustic oscillations and convective motions of a star, its brightness is determined at short intervals over a long period. The measured brightness values – plotted as a function of time – yield a light curve.
The most accurate method available for measuring the gravity of a star is the detailed analysis of the stellar oscillations and thus the light curve. The method can only be used for those stars whose oscillations stand out clearly from the background noise, however. But this is usually only the case with bright and therefore relatively few stars.
It is more often the case that astronomers have to deal with stars which are not bright enough for their oscillations to be investigated in detail. Their light curves are much noisier, as the signal-to-noise ratio depends on the brightness of a star, among other things. The fainter a star, the weaker the signal that arrives at the detector and the more difficult it becomes to process it. For light curves with so much noise, the individual frequencies can no longer be extracted and the classic method fails.
The new method, which the researchers call the Autocorrelation Function Timescale Technique or Timescale Technique for short, now allows researchers to determine an accurate value for the gravity of faint stars with very noisy light curves.
The astronomers filter the light curves in order to suppress long-period signals – which originate from the magnetic field of the star, for example, and are not directly affected by the surface gravity. The typical timescale of the signal caused by convection and pulsation can then be determined from the filtered light curve.
This is done with the aid of a so-called high-pass filter, which sieves out long-period signals from the data. The filter frequency must be selected such that the signal to be measured is not filtered out as well; the intention is to remove all periodic signals which do not correlate with gravity, i.e. signals that stem from the stellar rotation, for example.
The accuracy of the method is around four percent. The only method to date which can be applied to faint stars only provides an accuracy of around 25 percent in contrast.
The researchers see a wealth of possible applications for their method. The Kepler space telescope, for example, is currently using the transit method to look for exoplanets, generating hundreds of thousands of highly precise light curves in the process. Future missions, such as PLATO or TESS, will also use this method.
In the process, millions of stars will be observed, whose stages of evolution and the sizes of any planets they may have can be investigated with the new method.
“The method provides us with precise values for the stellar parameters we need to determine the structure and the age of the stars,” says co-author Saskia Hekker from the Max Planck Institute for Solar System Research in Göttingen. And: “The results for the individual stars will also be very useful in giving us a better understanding of our Milky Way.”
Quelle: Max Planck Institute for Solar System Research / Göttingen
Astronomie
« Zum vorherigen Eintrag Zum nächsten Eintrag »
2576 Views
Created with page4