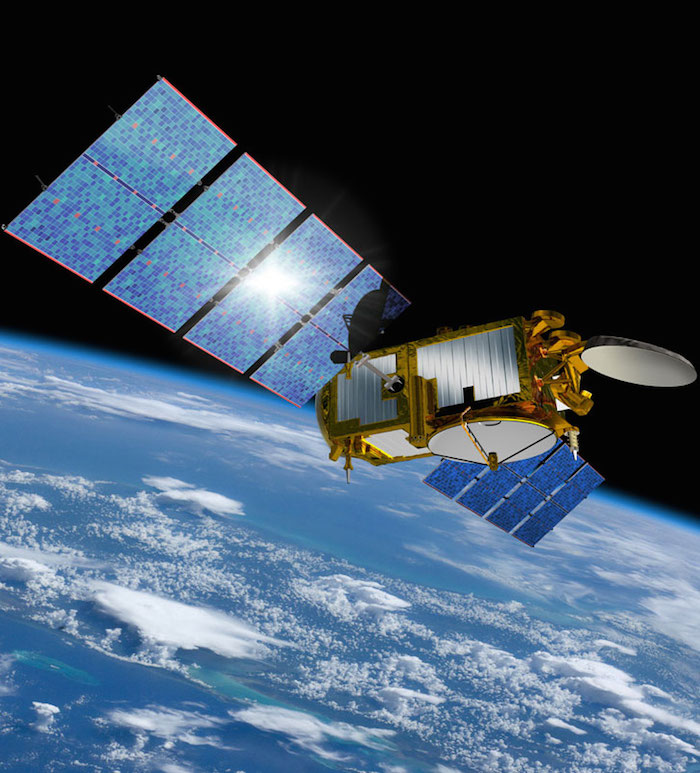 The Jason-3 oceanography satellite is now scheduled to launch Sunday 17 January at 10:42 EPSDT (19:42 CET) from Vandenberg Air Force Base (VAFB), California, and the launch campaign has resumed on site. Jason-3 is set to extend the time-series of highly precise ocean altimetry measurements supporting climate monitoring, operational oceanography and seasonal forecasting.

The launch of Jason-3 had been postponed following the mishap of the Falcon-9 launcher on 28 June when the programme partners —CNES, NASA, Eumetsat and NOAA— decided to interrupt the launch campaign to leave time for all necessary investigations to return the launcher to flight. Thursday 10 December, after the Falcon-9 launcher successfully came through a series of NASA launch readiness reviews, the launch of Jason-3 was rescheduled for 17 January 2016. All CNES, Thales, NASA and SpaceX teams are now working together to meet this launch date.
Jason-3 is the result of a collaboration between CNES, NASA, Eumetsat and NOAA, pursuing the mission of its predecessor satellites that have been surveying the oceans for more than 20 years. Jason-3 is built around a Proteus bus accommodating a suite of altimetry instruments that will continue the highly precise measurements of sea-surface height begun with TOPEX/Poseidon, Jason-1 and Jason-2.
GLOBAL WARMING
The Jason-3 mission will assure long-term data continuity as a key element in the fleet of altimetry satellites set to operate in the years ahead. It features a number of improvements over its predecessor Jason-2, both in systems and data processing. Today, more than 10,000 people in over 120 countries are using data from altimetry missions for applications that are crucial to meet the challenges of a changing climate, allowing them to model the oceans, weather and climate, and supporting operational oceanography.
For CNES, 2015 has been a year focused on climate, culminating in the COP21 climate conference that came to a close this weekend in Paris. The rise in mean sea level measured by altimetry satellites is one of the clearest indicators of global warming. Jason-3 is an especially important mission in this respect and CNES has once again brought all of its expertise to bear in developing it.
Quelle: CNES
.
Update: 26.12.2015
. 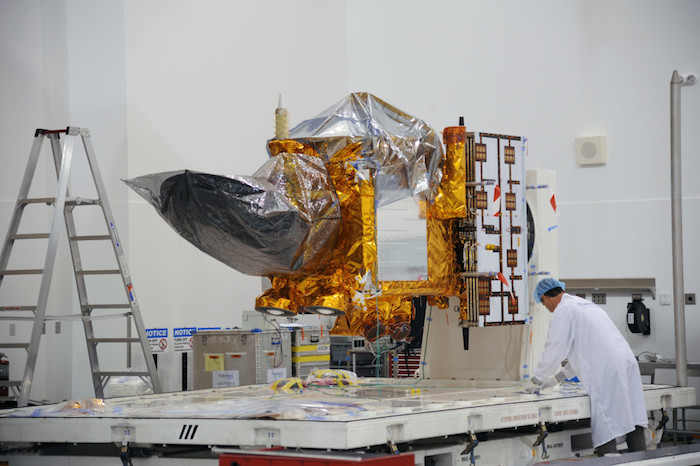 Launch preparations continue at Vandenberg Air Force Base in California for the launch of Jason-3 on January 17, 2016. At Space Launch Complex 4E, the next milestone is mating the first stage booster to the second stage which is currently planned to occur on Dec. 28.  The spacecraft, seen here after arriving at Vandenberg earlier this year, will be encapsulated into the payload fairing on Jan. 9, then mated to the rocket’s second stage on Jan. 12.
.
Media Invited to View Launch of New Ocean Monitoring SatelliteThe launch of Jason-3, an international mission led by the National Oceanic and Atmospheric Administration (NOAA) to continue U.S.- European satellite measurements of the topography of the ocean surface, is scheduled for Sunday, Jan. 17, 2016.
Media are invited to cover prelaunch activities and launch at Vandenberg Air Force Base in California. Advance accreditation is required by contacting Tech. Sgt. Tyrona Lawson of the 30th Space Wing Public Affairs Office at 805-606-3595 or tyrona.lawson@us.af.mil, or by fax at 805-606-4571.
Information required for U.S. media is full legal name, date of birth and media affiliation. A legal photo identification will be required upon arrival at Vandenberg. The deadline for U.S. media to apply for accreditation is Jan. 11. The deadline for international media to apply for accreditation has passed.
Liftoff aboard a SpaceX Falcon 9 rocket from Space Launch Complex 4 East is targeted for 10:42 a.m. PST (1:42 p.m. EST), at the opening of a 30-second launch window. If needed, a backup launch opportunity is available at 10:41 a.m. PST (1:31 p.m. EST) on Jan. 18.
A Jason-3 prelaunch news conference and science briefing will be held at Vandenberg at 4 p.m. EST on Jan. 15. The briefing will be carried live on NASA Television and streamed on the agency’s website. Media also can ask questions via phone by calling 321-867-2468, or on Twitter by using the hashtag #askNASA.
On Jan. 16, media will have an opportunity to photograph the Falcon 9 and Jason-3 spacecraft at the launch pad. Those wishing to attend the launch pad photo opportunity should confirm their participation with Capt. Selena Rodts of the 30th Space Wing Public Affairs office at 805-606-3595 no later than Jan. 11.
On Jan. 17, NASA TV launch commentary coverage of the countdown will begin at 11 a.m. EST. Coverage will feature updates of countdown milestones and streaming video clips that highlight launch preparations and liftoff. Spacecraft separation from the rocket will occur 55 minutes after launch.
Jason-3 will continue the ability to monitor and precisely measure global sea surface heights, monitor the intensification of tropical cyclones and support seasonal and coastal forecasts. Jason-3 data also will benefit fisheries management, marine industries and research into human impacts on the world’s oceans. The mission is planned to last at least three years, with a goal of five years.
Jason-3 is a four-agency international partnership consisting of NOAA, NASA, Centre National d’Etudes Spatiales, France’s space agency, and the European Organization for the Exploitation of Meteorological Satellites. Thales Alenia of France built the spacecraft.
Quelle: NASA
-
Update: 4.01.2016
.

SpaceX hopes to make history again on Jan. 17 by landing a Falcon 9 rocket on a drone ship at sea after launching a payload into orbit. SpaceX confirmed to NBC News that it would be making the attempt; the news was earlier reported by space journalist Charles Lurio on Twitter.
This launch will take off from Vandenberg Air Force Base in California, carrying NASA's Jason-3 satellite. Jason-3 carries instruments to monitor the ocean's surface, collecting information about circulation patterns and perhaps rising sea levels.
The commercial spaceflight company succeeded Dec. 21 in making its first-stage rocket, which is usually discarded after reaching space, return safely to Earth and land upright at a predetermined location nears its launch pad at Cape Canaveral in Florida.
A previous attempt in January 2015 to land a Falcon 9 on a "drone ship" — an automated seagoing landing platform — nearly succeeded, but a last-minute failure saw the rocket topple over and explode in spectacular fashion.
Having a mobile landing platform means more flexibility in when and how launches can proceed — it's not always convenient or possible for a rocket to return to a static site like a launch facility or other suitably flat, empty space. A mobile landing site could conceivably be placed where it is safest or most fuel-efficient for the rocket to come down.
This will not be the exact same rocket the company launched last month — though SpaceX founder Elon Musk is confident that would be just fine.
-
"I think we'll probably keep this one on the ground because it's quite unique, it's the first one we brought back," Musk said in a conference call following December's successful landing. The company will "just confirm through tests that it could fly again and then put it somewhere to display."
Quelle: NBCNEWS
-
Update; 12.01.2016
.
SpaceX Falcon 9 Static Fire Complete for Jason-3
At Space Launch Complex 4 on Vandenberg Air Force Base in California, the static test fire of the SpaceX Falcon 9 rocket for the upcoming Jason-3 launch was completed Monday at 5:35 p.m. PST, 8:35 p.m. EST. The first stage engines fired for the planned full duration of 7 seconds.  The initial review of the data appears to show a satisfactory test, but will be followed by a more thorough data review on Tuesday.  With this test complete, the next step in prelaunch preparations is to mate the rocket and the Jason-3 spacecraft, which is encapsulated in the payload fairing. This also is planned to occur as soon as Tuesday.
Quelle: NASA
-
Update: 14.01.2016
.

The Jason 3 oceanography satellite, a joint project between U.S. and European weather agencies, is closed up inside the nose cone of a SpaceX Falcon 9 rocket awaiting launch from California’s Central Coast on Sunday.
Technicians from SpaceX and Thales Alenia Space, the French manufacturer of the Jason 3 spacecraft, oversaw the encapsulation procedure Jan. 8 inside SpaceX’s payload processing facility at Space Launch Complex 4 at Vandenberg Air Force Base, California.
With a launch weight of approximately 1,124 pounds, or 510 kilograms, Jason 3 sits inside the Falcon 9’s clamshell-like fairing, which measures 17 feet, or 5.2 meters, in diameter. Ground crews planned to attach the payload shroud containing Jason 3 to the rocket Wednesday.
Jason 3 carries a radar altimeter instrument to detect the heights of ocean waves and monitor sea level rise, variables critical in forecasting tropical cyclone development, predicting large-scale climate patterns, and tracking the consequences of climate change.
Liftoff from Vandenberg is set for 10:42:18 a.m. PST (1:42:18 p.m. EST; 1842:18 GMT) Sunday.
. 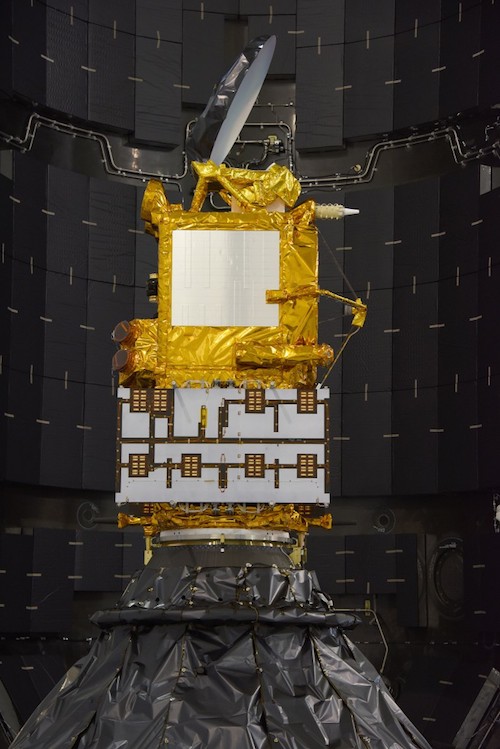 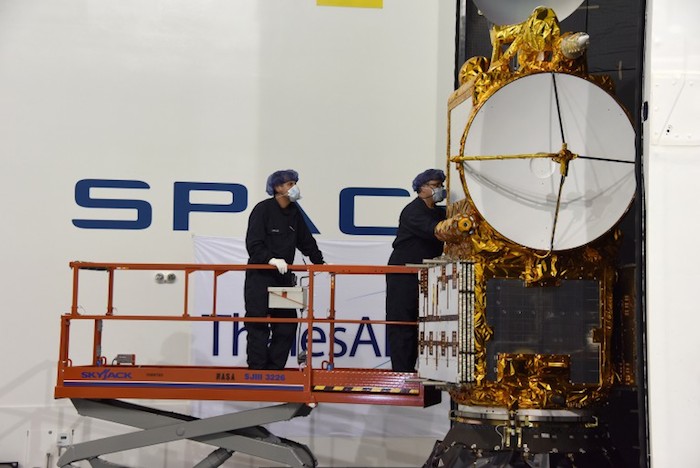 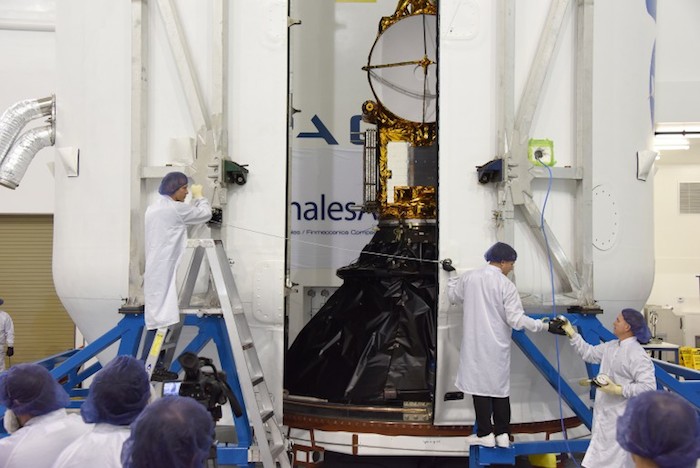 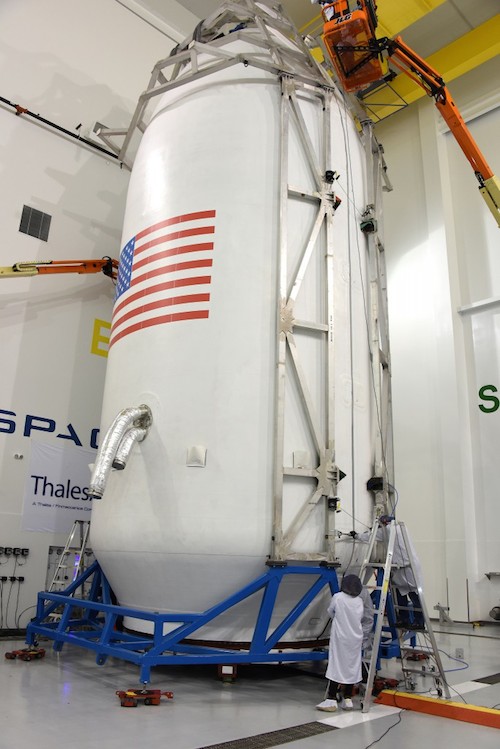 The Jason-3 international oceanography satellite mission is scheduled for launch from Vandenberg Air Force Base in central California on Sunday, Jan. 17. Liftoff aboard a SpaceX Falcon 9 rocket from Vandenberg’s Space Launch Complex 4 East is targeted for 10:42:18 a.m. PST (1:42:18 p.m. EST) at the opening of a 30-second launch window. If needed, a backup launch opportunity is available on Monday, Jan. 18 at 10:31:04 a.m. PST (1:31:04 p.m. EST).
Jason-3 will add to a 23-year satellite record of global sea surface heights, a measurement with scientific, commercial and practical applications related to climate change, currents and weather. Jason-3 data will be used for monitoring global sea level rise, researching human impacts on oceans, aiding prediction of hurricane intensity, and operational marine navigation. The mission is planned to last at least three years, with a goal of five years. It is a four-agency international partnership of the National Oceanic and Atmospheric Administration (NOAA), NASA, the French Space Agency CNES (Centre National d’Etudes Spatiales), and EUMETSAT (the European Organization for the Exploitation of Meteorological Satellites).
Launch Timeline
About 154 seconds (just under two minutes) after the Falcon-9 rocket lifts off, the main engine will cut off. About three seconds after that, the rocket's first stage will separate. Second-stage ignition will follow in about eight seconds. Half a minute into the second-stage burn, the payload fairing, or launch vehicle nose cone, will be jettisoned -- a bit over three minutes after launch. The first cutoff of the second-stage engine will take place nine minutes after liftoff.
The Jason-3 spacecraft and second stage will then coast in an intermediate orbit for about another 46 minutes. The second-stage engine will fire a second time about 55 minutes after launch to place Jason-3 in the desired orbit. Separation of the rocket and spacecraft will occur about half a minute later, or almost 56 minutes after liftoff. A little more than two minutes later, Jason-3 will begin to deploy its twin solar arrays to prepare for operation.
Quelle: NASA
-
Update: 17.01.2016
. 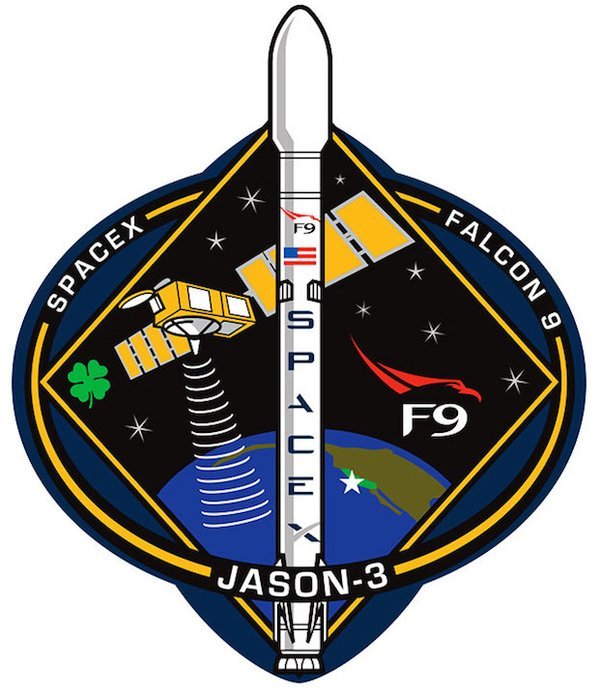 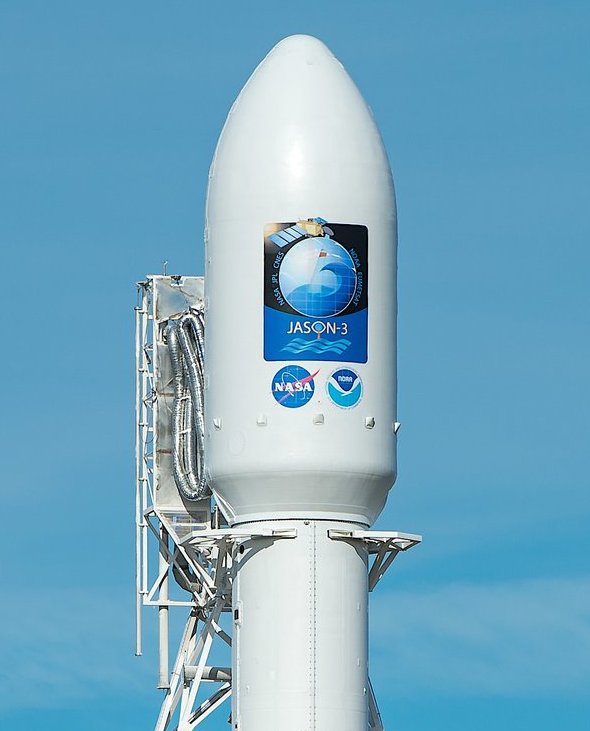 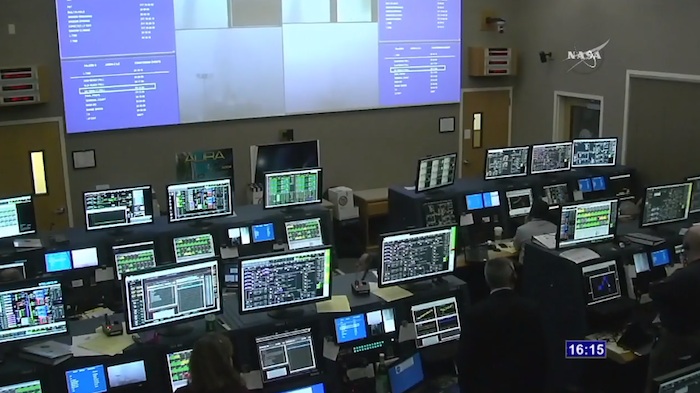 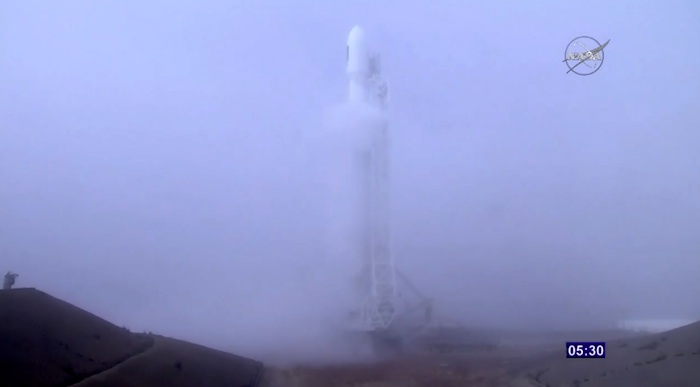 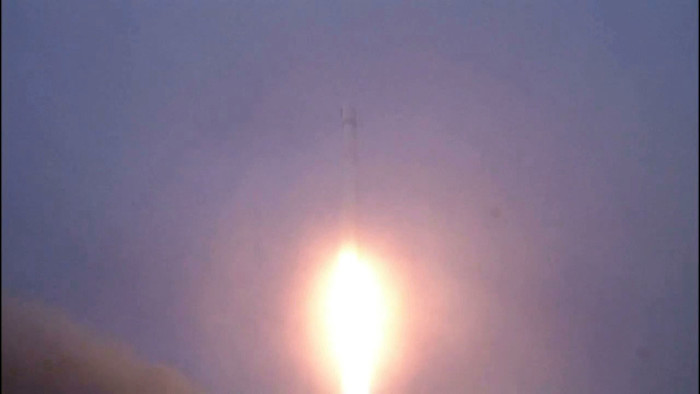 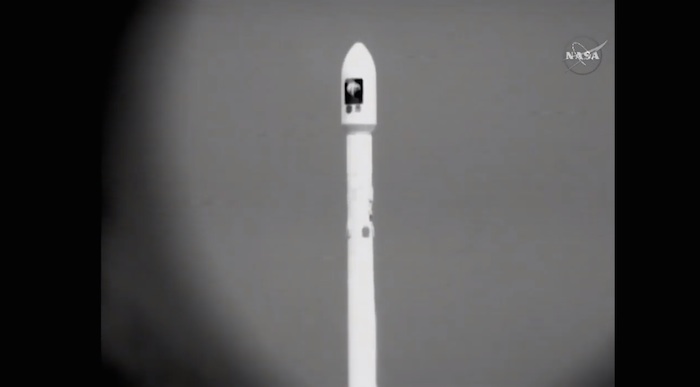 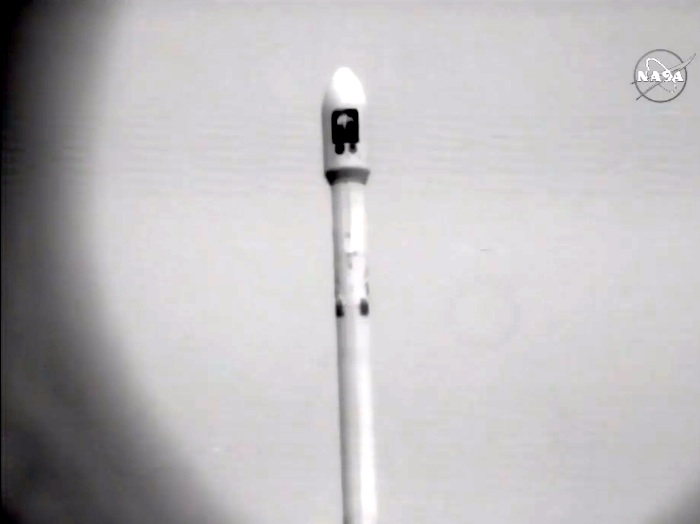 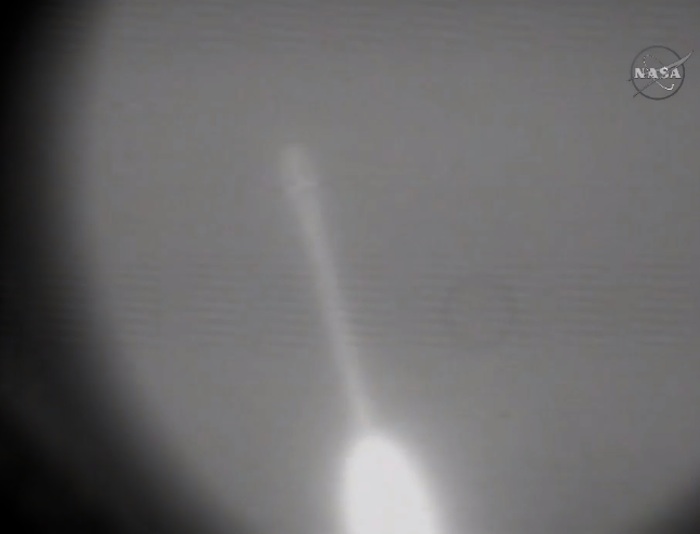 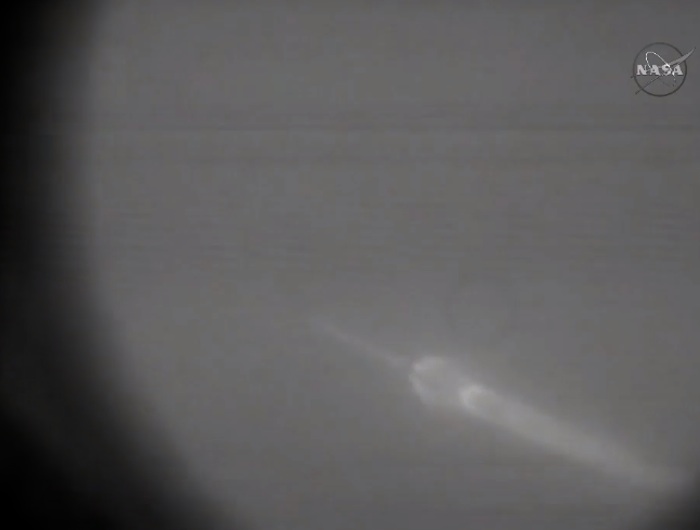 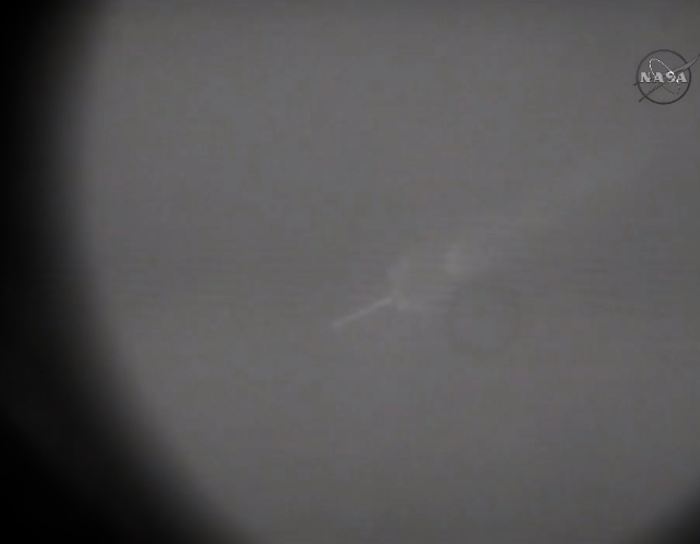 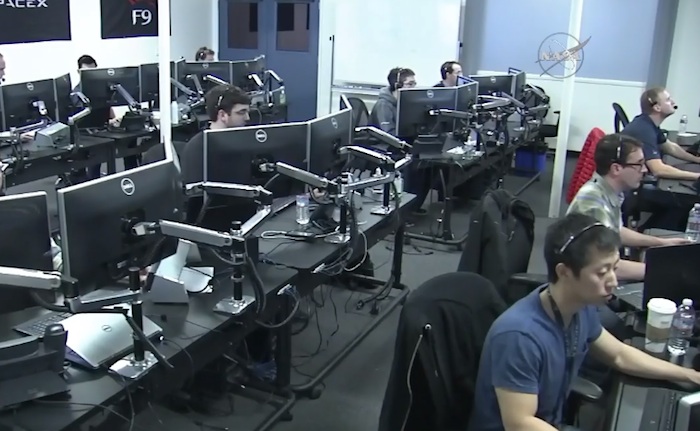 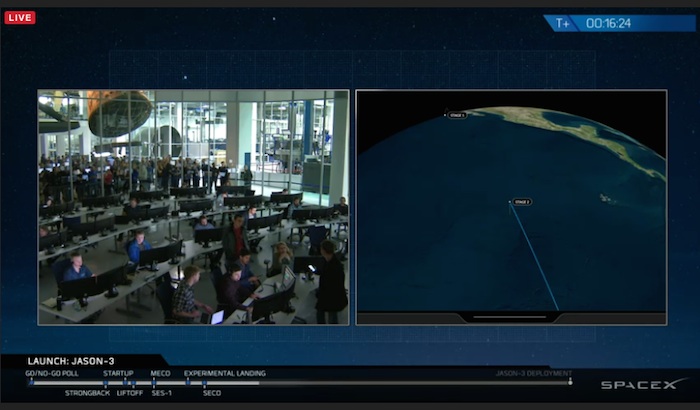 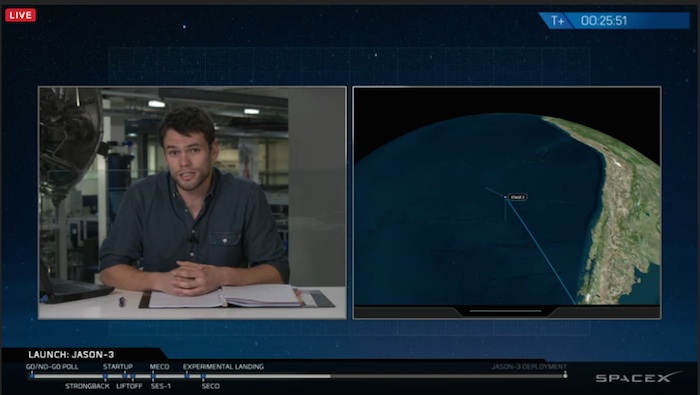 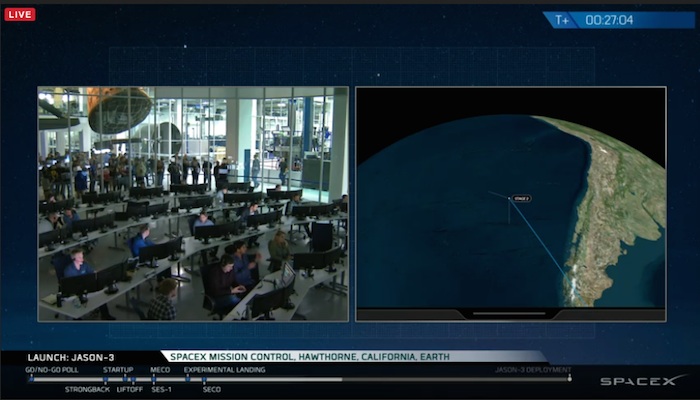 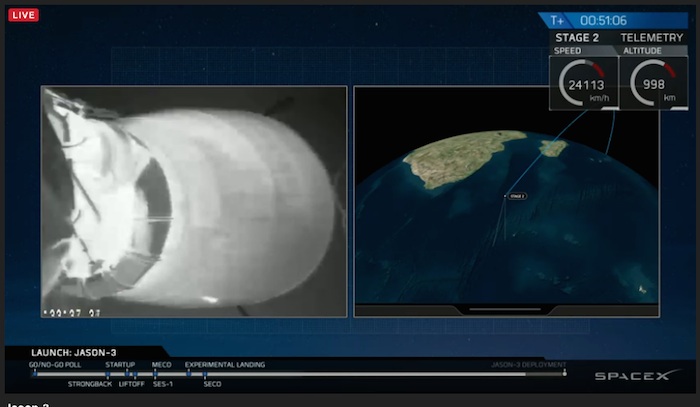 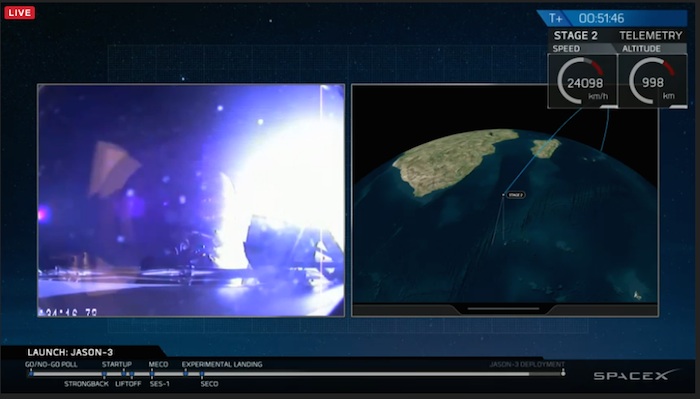 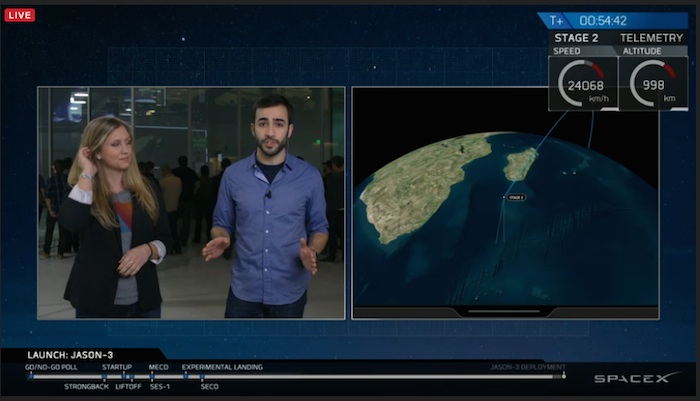 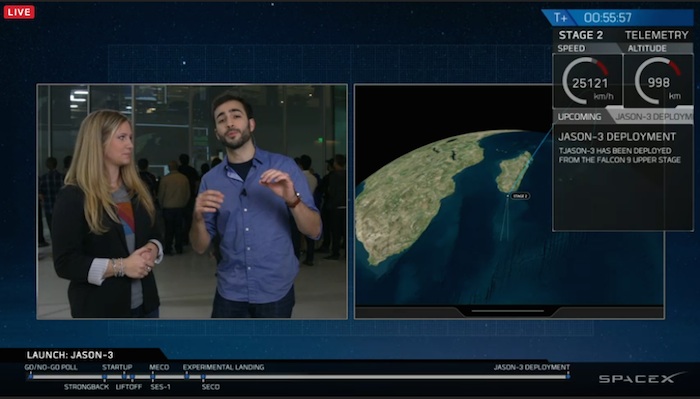 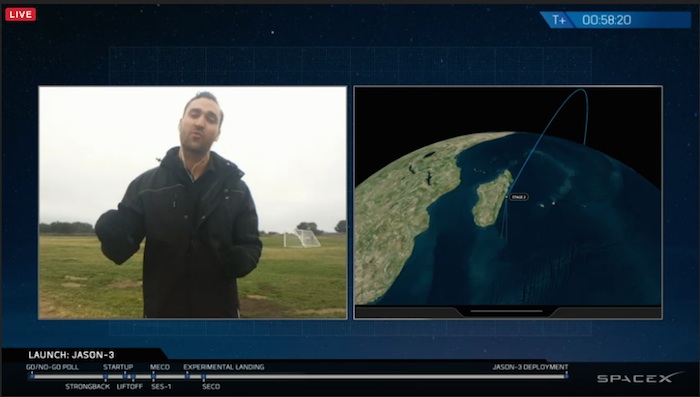