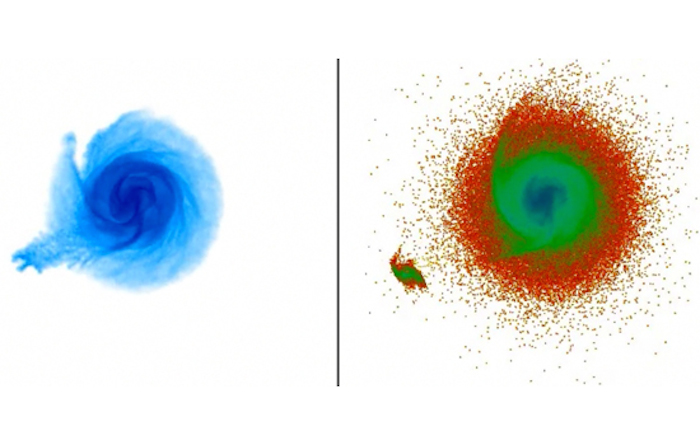 A trio of brightly pulsating stars at the outskirts of the Milky Way is racing away from the galaxy and may confirm a method for detecting dwarf galaxies dominated by dark matter and explain ripples in the outer disk of the galaxy.
This new method to characterize dark matter marks the first real application of the field of galactoseismology. Just as seismologists analyze waves to infer properties about the Earth's interior, Sukanya Chakrabarti, assistant professor at Rochester Institute of Technology, uses waves in the galactic disk to map the interior structure and mass of galaxies.
Chakrabarti and her team used spectroscopic observations to calculate the speed of the three Cepheid variables - stars used as yardsticks to measure distance in galaxies - in the Norma constellation. Chakrabarti's 2015 study used Cepheid variables to mark the location of a dark-matter dominated dwarf galaxy approximately 300,000 light-years away. In contrast, the disk of the Milky Way terminates at 48,000 light-years.
The current study tracks a cluster of Cepheids that are racing away at an average speed of 450,000 miles per hour; while the radial velocity of stars in the stellar disk of the Milky Way is about 13,000 miles per hour, Chakrabarti said. The method confirms her 2009 prediction.
"The radial velocity of the Cepheid variables is the last piece of evidence that we've been looking for," Chakrabarti said. "You can immediately conclude that they are not part of our galaxy."
Invisible particles known as dark matter make up 85 percent of the mass of the universe. The mysterious matter represents a fundamental problem in astronomy because it is not understood, Chakrabarti said.
Her method for locating satellite galaxies dominated by dark-matter taps principles used in seismology to explore the interior of the galaxy.
"We have made significant progress into this new field of galactoseismology whereby you can infer the dark matter content of dwarf galaxies, where they are, as well as properties of the interior of galaxies by looking at observable disturbances in the gas disk," Chakrabarti said.
She added: "The original prediction was based on observed waves in the outer gas disk of our galaxy which led to a specific prediction for how massive this dark matter dominated dwarf galaxy would have to be to produce these waves. It's very similar to seismology in a sense because we're trying to infer things about the interior of galaxies and how much dark matter there is and how much there has to be to produce these disturbances."
The study further questions the standard paradigm that old stars populate the dark matter halo and young stars form in the gas-rich stellar disks.
"Given the evidence, these are very likely young Cepheid variables," Chakrabarti said. "It raises the question, shouldn't we also be exploring and looking for young Cepheid variables in the halo?"
There could be a population of yet undiscovered Cepheid variables that formed from a gas-rich dwarf galaxy falling into the halo, she said.
"We used to have a static picture of galaxy evolution but now we know that galaxies are constantly merging with other smaller galaxies and so within this more dynamical scenario, it's important to ask why wouldn't there be young Cepheid variables that are made in the halo due to fresh gas flowing in, or due to gas-rich dwarf galaxies merging with our own," Chakrabarti said.
Spectroscopic observations used in the study were made at the Gemini Observatory and on the Magellan telescopes, as well as on the WiFeS spectrograph. The international team includes Rodolfo Angeloni, Ken Freeman, Leo Blitz, among others, and RIT research scientist Benjamin Sargent and Andrew Lipnicky, a graduate student in the astrophysical sciences and technology program.
Quelle: SD
Astronomie
« Zum vorherigen Eintrag Zum nächsten Eintrag »
2344 Views
Created with page4