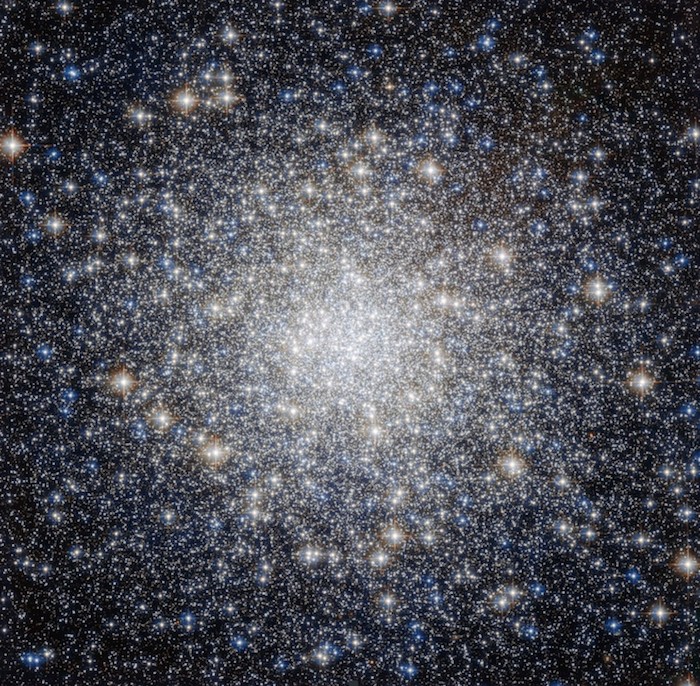 Inside a dense globular cluster, traveling to new worlds would be simple as pie. (NASA/ESA/Gilles Chapdelaine)
-
If we want to find intelligent aliens with advanced, space-faring civilizations, it would make sense for us to start in densest stellar neighborhoods. That's the idea behind research presented Wednesday at the annual meeting of the American Astronomical Society.
Led by Rosanne Di Stefano of the Harvard-Smithsonian Center for Astrophysics, the research focuses on intense packs of stars called globular clusters, about 150 of which hover on the outskirts of the galaxy. Globular clusters are about 10 billion years old, making them nearly as old as the Milky Way itself, and can contain, on average, about a million stars in just 100 light years of space.
These bright pockets of starlight might not host many planets at all, let alone any that are habitable. Because these stars were formed so early in the galactic game, they contain fewer of the relatively young heavy elements, like iron, that are traditionally thought necessary to form planets. But Di Stefano doesn't think we should give up on the idea of life in the clusters. It's possible, though not proven, that small, rocky planets (like Earth) could manage to form under such conditions.
So while planets might be much less common in globular clusters, it's possible that the few that managed to form would be the right kinds of planets for life as we know it. And hey, when you've got a million stars packed into 100 light years, you don't need the odds to be that good in order for a few Earth-like planets to show up. If one happened to be the right size and distance from a host star that was capable of warming up a planet without obliterating it, life similar to our own could theoretically evolved.
The possibility of life that Di Stefano and her co-author Alak Ray of the Tata Institute of Fundamental Research, in India, present is just that – a possibility. No one is claiming that these planets exist, or that they'd definitely harbor life if they did.
But if they do – well, that's where things get cool.
The reason Di Stefano wants us looking at globular clusters is that the culture of spaceflight for an intelligent species that evolved there would be radically different from our own. Interstellar travel would be far more plausible for species evolving out in a globular cluster, and interstellar communication would be a breeze.
"The Voyager probes are 100 billion miles from Earth, or one-tenth as far as it would take to reach the closest star if we lived in a globular cluster," Di Stefano said in a statement. "That means sending an interstellar probe is something a civilization at our technological level could do in a globular cluster."
And our planet is only 4.5 billion years old, so the hypothetical planets in these far-off clusters could have taken their sweet evolutionary time and still be well past the point we're at now. Alternatively, everything over there could have already evolved, lived, and gone extinct. But that's less exciting to think about.
Because the closest globular cluster is thousands of light years away, this thought experiment will probably remain a thought experiment and nothing more for the foreseeable future. But as telescopes get more powerful, and scientists develop increasingly sophisticated ways of using them, we could very well direct our attention to these star-packed regions to look for signs of interstellar traffic.
Quelle: The Washington Post
Astronomie sagen Wissenschaftler.
« Zum vorherigen Eintrag Zum nächsten Eintrag »
2339 Views
Created with page4