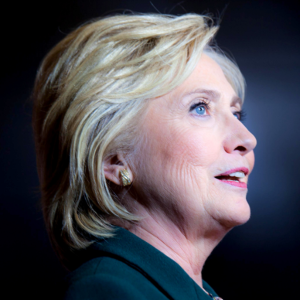 If elected, Hillary Clinton vows to ‘get to the bottom’ of the UFO mystery

If the truth about UFOs is out there, Hillary Clinton says she’ll be on it as president.
When the Democratic presidential front-runner vowed to “get to the bottom” of the alien-visitation issue, she just might have locked up the “X-Files” vote – while giving her critics one more thing to taunt her with.
Clinton’s comment came at the end of a recent chat with the editorial board of the Conway Daily Sun in New Hampshire, which holds its first-in-the-nation presidential primary on Feb. 9. Reporter Daymond Steer reminded her about a conversation they had about UFOs in 2007, and that perked up the candidate.
“Yes, I’m going to get to the bottom of it,” Clinton reportedly replied.
Back in 2014, Clinton’s husband, former President Bill Clinton, said on ABC’s “Jimmy Kimmel Live” that he had aides check the files on Area 51 in Nevada while he was in office, just to make sure “there were no aliens down there.”  (The CIA released a declassified report on Area 51’s Cold War role in 2013.) Bill Clinton also noted that recent discoveries make it “increasingly less likely that we are alone.”
“If we were visited someday I wouldn’t be surprised,” he said. “I just hope that it’s not like ‘Independence Day.'”
When Hillary Clinton was asked about those comments and the prospects for getting a visit from extraterrestrials, she replied, “I think we may have been [visited already]. We don’t know for sure.”
Her campaign chairman, John Podesta, has long called for more disclosure about UFO cases, although he hasn’t said specifically what needs to be revealed. When he left his post as senior adviser to President Barack Obama, he tweeted that his “biggest failure of 2014” was his inability to secure the disclosure of UFO files.
Today, Podesta noted Hillary Clinton’s reported comment that he made the candidate “personally pledge we are going to get the information out” about aliens and Area 51.
For what it’s worth, “The X-Files” had its heyday on TV during the Clinton administration. It’s due to return to Fox as a six-episode miniseries starting Jan. 24.
Also for what it’s worth, the Obama White House issued statements denying the existence of a UFO cover-up in 2011, in response to an online petition drive.
“The U.S. government has no evidence that any life exists outside our planet, or that an extraterrestrial presence has contacted or engaged any member of the human race,” Phil Larson from the White House Office of Science and Technology Policy wrote in a posting on the WhiteHouse.gov website. “In addition, there is no credible information to suggest that any evidence is being hidden from the public’s eye.”
(Larson left OSTP a year ago and now works for SpaceX.)
The latest comments from Hillary Clinton and her campaign chairman are likely to set off a buzz in the UFO community. For years, folks at the Paradigm Research Group have been talking about the Clintons’ purported connections to a disclosure campaign dubbed the Rockefeller Initiative.
The comments are also likely to stir up politically motivated snark from Republicans who want to “get to the bottom” of other Clinton controversies – and just plain snark from everybody else.
Quelle: GeekWire

CONWAY — Democratic presidential hopeful Hillary Clinton gave UFO enthusiasts a reason to cheer at the close of her recent editorial board meeting with The Conway Daily Sun.
. 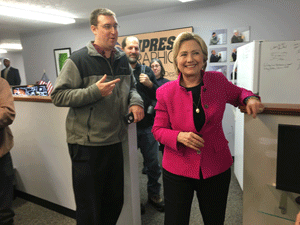 Reporter Daymond Steer asks Democratic candidate Hillary Clinton for her stance on UFOs when she visited the Sun on Tuesday. (MARGARET McKENZIE PHOTO)
During the meeting, the former first lady, former senator from New York and secretary of state answered serious questions about foreign policy and the economy, and at the end, she chatted with this reporter, who had asked her about UFOs in 2007 while working for the Cabinet Press in Milford, NH. She recalled that 2007 exchange with a smile and seemed to have fun discussing the topic.
"Yes, I'm going to get to the bottom of it," said Clinton with enthusiasm.
Back in 2007, Clinton had said that the No. 1 topic of freedom-of-information requests that her husband, former President Bill Clinton, received  at his library was UFOs.
In 2014, Bill Clinton told late-night TV host Jimmy Kimmel that he wouldn't be surprised if Earth is visited by aliens since so many planets out there may support life.
"I just hope it's not like 'Independence Day,'" said Clinton, referring to a movie about alien invaders.
When asked about her husband's nonchalant comment about contact with the third kind, Hillary Clinton responded: "I think we may have been (visited already). We don't know for sure."
Clinton also said she would like to look into Area 51, a secret military base in Nevada that has long been rumored to contain aliens. At first, she called it Area 54 and then corrected herself.
But Bill Clinton told Kimmel that he had already looked into Area 51. He said everyone who works there has to stop about an hour away to put on special clothing. Clinton said Area 51 is where stealth technology is made.
"There are no aliens there," said Bill Clinton, adding at the anniversary of the supposed Roswell, N.M., crash in 1947, he released all the documents he could on the subject because he knew there would be popular demand.
Kimmell had Bill Clinton promise that he would have announced the existence of aliens if he had found them.
Hillary Clinton, while at the Sun, added that the chairman of her campaign, John Podesta, is a huge fan of UFO lore. She said he enjoys a sci-fi show  on the FX network. Podesta served as chief of staff to Bill Clinton and counselor to the president for Barack Obama.
"He has made me personally pledge we are going to get the information out," said Clinton. "One way or another. Maybe we could have, like, a task force to go to Area 51."
This story has been modified to say that Area 51 is in Nevada and that Steer worked for the Cabinet Press in Milford, NH at the time of the 2007 interview.
Quelle: Conway Daily Sun 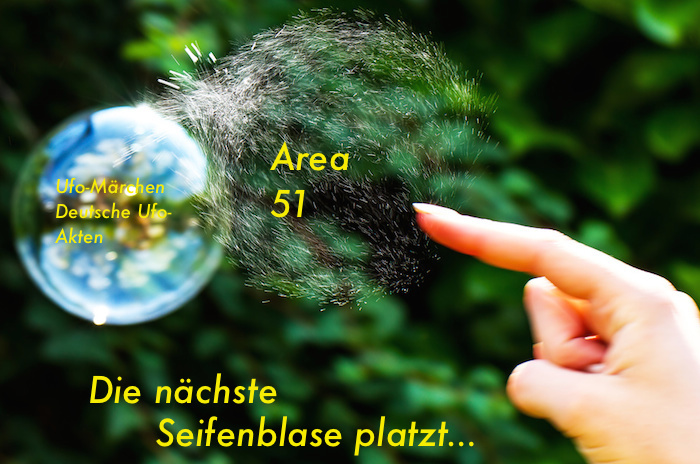