On Oct. 1, 2014, NASA mission operations lost communication with one of the two spacecraft of the Solar and Terrestrial Relations Observatory, or STEREO, mission, just as the spacecraft was about to orbit around the other side of the sun. Though they haven’t heard from the Behind spacecraft, also known as STEREO-B, in over a year, the spacecraft has finally emerged into a region where it can once again receive radio signals. Scientists have a plan to get it back—and their chances only get better with time.
The two STEREO spacecraft, launched in October 2006, were originally designed to complete a two-year mission, ending in 2008. But—like many NASA spacecraft—they lasted much longer. The long lives of the two STEREO spacecraft, now nine years old, have been a boon for scientists studying the sun and its influence throughout the solar system. The two STEREOs slowly drifted away from Earth as they orbited the sun, one ahead and one behind our home planet, giving scientists constantly-improving views of the sun’s far side, allowing us for the first time to see the whole sun at once.
However, there are always challenges associated with operating a spacecraft for more than four times its original lifespan. In STEREO’s case, its orbit was the biggest hurdle. The same slow drift that lets the two STEREO spacecraft give us widely varying views of the sun means that each spacecraft eventually lay on the other side of the sun from Earth, leading to a three-month period where communication was impossible due to the sun’s interference.
. 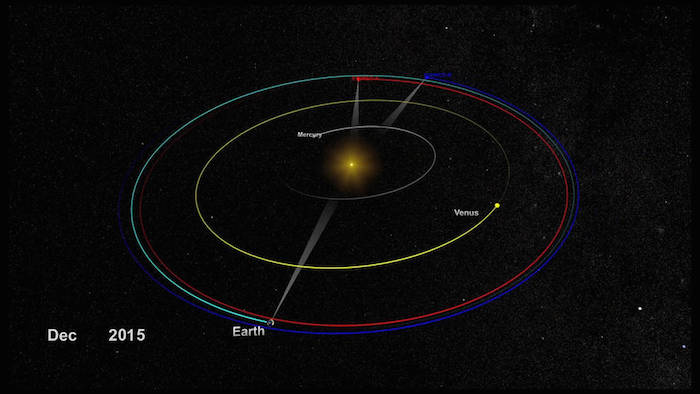 STEREO-B captured this view of an erupting coronal mass ejection on July 23, 2012. The unique vantage points of the two STEREO spacecraft gave us unprecedented simultaneous views of the entire sun.
Credits: NASA/STEREO
-
“The Deep Space Network was able to create an acquisition technique that can sweep through a frequency segment in about ten seconds,” said Ossing. “We’ve tested it on the Ahead spacecraft, and it worked even better than expected.”
Furthermore, the distance means that any signal that has a hope of reaching STEREO-B must be much, much stronger than the signals we send to near-Earth missions. Engineers have a plan to increase the power of the signal we send to STEREO-B through something called constructive interference. By combining the signals from multiple stations in the Deep Space Network with specific timing and configurations, the waves that form the radio signals collide perfectly to create an even stronger signal.
“Constructive interference creates a new signal that’s more powerful than the sum of its parts,” said Thompson. “We’re combining signals from three 34-meter antennas, which will give us a signal more than twice as powerful as a 70-meter antenna.”
Because STEREO-B is so far from Earth, any signal it sends back to us will likely be too weak for the Deep Space Network to interpret. So, several of the largest radio telescopes in the world—including the Green Bank Radio Telescope, Arecibo Observatory, and the Allen Telescope Array—will be listening for STEREO-B’s transmission.
The STEREO-B recovery will be fraught with challenges—but it will only get easier over time. Because the spacecraft is on an orbit similar to Earth’s, but lagging behind, Earth will lap STEREO-B in 2023, meaning that the spacecraft gets closer to us every day that passes until then.
“In 2019, the spacecraft will be far enough from the sun that we could image it directly with Hubble and figure out the rate of spin,” said Ossing. “We’re very hopeful that we’ll recover STEREO-B, but it’s just going to take time.”
STEREO is the third mission in NASA's Solar Terrestrial Probes program, which is managed by NASA Goddard for NASA’s Science Mission Directorate, in Washington, D.C.
Raumfahrt
« Zum vorherigen Eintrag Zum nächsten Eintrag »
2081 Views
Created with page4