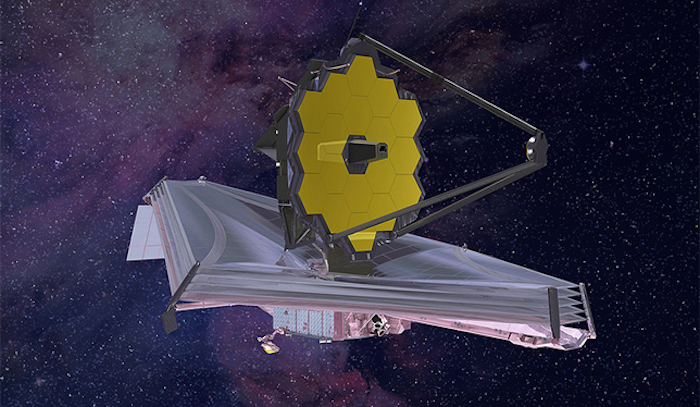 An artist’s rendering of the James Webb telescope, to be launched in 2018. Image credit: Northrop Grumman / NASA
Discovering extraterrestrial life is the goal of the new Institute for Research on Exoplanets, or iREx, at Université de Montréal. The institute will be helped in its quest by a recent $1-million donation from the Trottier Family Foundation, created by Lorne Trottier, a founder of the Montreal-based Matrox Corporation and a space exploration enthusiast. The money will fund research grants at all levels, from undergraduate to postdoctoral, in support of recruiting top local and international researchers.
The iREx is led by René Doyon, professor of astrophysics at U de M. “For the first time, the creation of new tools such as the James Webb telescope, scheduled to be launched into space in October 2018, brings us hope of discovering life beyond Earth within the next decade or two,” says the professor.
Discovering extraterrestrial life is the Holy Grail of space exploration, but forget images of E.T. or Alien and think more … bacteria and microbes. “Microbial life is the most abundant form of life on Earth and that’s what we’re also looking for on other planets,” says Dr. Doyon.
It’s not a matter of directly observing life, but rather detecting its atmospheric effects, or bio-signature, on an observed planet. Dr. Doyon gives the example of oxygen on Earth, which is produced by plants and phytoplankton. No life, no oxygen. “If life were extinguished on Earth,” he points out, “it would only take a few thousand years for gases like oxygen or methane to disappear.”
Canada is providing one of the four instruments aboard the James Webb telescope. One of its functions will be to detect and measure the chemical composition of exoplanet atmospheres. Dr. Doyon is the scientific director in charge of this instrument and assisted in its development. This contribution will earn his team privileged access to 450 hours of observation at the beginning of the instrument’s lifespan.
Dr. Doyon aims to secure $15 million in funding in total for iREx over 10 years. “We already have the infrastructure. The funding will go towards great minds, especially by way of research chairs.” Over time, he says, iREx could add as many as 30 researchers to its existing 20.
Dr. Doyon also feels it’s time for exoplanet researchers in Montreal to join forces. He points out that McGill University, which was not involved in astrophysics a mere 15 years ago, now has a group as large as the one at Université de Montréal and is currently bringing on exoplanet research specialists.
“The iREX is proposing to pool these strengths to create a world-class centre of excellence,” says Dr. Doyon. “In 2008, we were the first to photograph a planetary system outside our solar system. We could soon have a front row seat to an even more fundamental discovery: extraterrestrial life!”
Quelle: U de Montréal UA
Astronomie
« Zum vorherigen Eintrag Zum nächsten Eintrag »
2381 Views
Created with page4