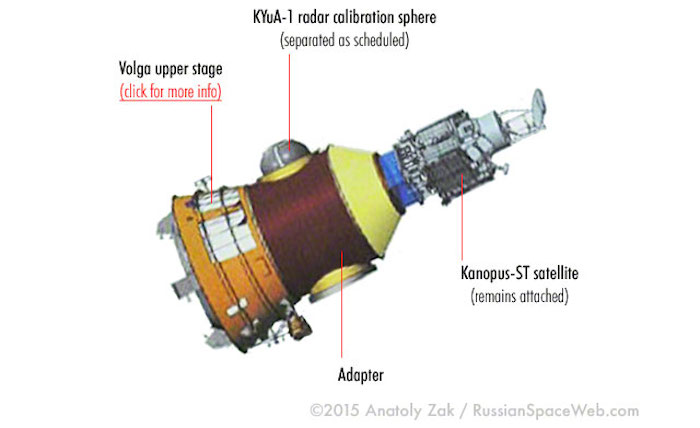 The Russian satellite Kanopus-ST with the Volga upper stage lost orbit and its pieces burned in dense atmosphere over the Atlantic on Tuesday, a high-ranking source in the Russian Aerospace Forces headquarters told TASS.
"The satellite together with the Volga upper stage entered the atmosphere over the southern part of the Atlantic this morning. They have fully burned in the dense atmosphere," the source said.
Quelle. TASS
.
Russian Military Satellite Suffers Launch Failure, Will Crash Soon
An advanced Russian military satellite was doomed by a setback during launch Saturday (Dec. 5) and could come crashing back to Earth in the next day or so, according to media reports.
The Kanopus-ST remote-sensing spacecraft failed to separate from the upper stage of its uncrewed Soyuz-2-1v rocket as planned during Saturday's liftoff from Plesetsk cosmodrome in northwestern Russia, Russia's TASS news agency reported today (Dec. 7).
"One of the four locks holding onto the satellite malfunctioned," TASS reported, citing an unnamed source in the Russian Aerospace Defense Forces.
Kanopus-ST is an experimental spacecraft likely designed to test the ability to track enemy submarines, according to RussianSpaceWeb.com, a site run by historian and journalist Anatoly Zak, a leading expert on Russia's space program.
"Although the previously quoted resolution of instruments onboard Kanopus-ST seems to be too low to discern submarines or their wake, the satellite could be a precursor for more advanced high-resolution systems," Zak wrote.
"The alleged anti-submarine capability apparently led to the classification of the Kanopus-ST as a military payload," he added. "Further public information on the status of the project and its instruments was largely restricted."
Tracking data gathered by the North American Aerospace Defense Command (NORAD), a joint effort of the United States and Canada, have revealed that the Soyuz's Volga upper stage (with Kanopus-ST still attached) had maneuvered to an orbit whose closet point to Earth lies at an altitude of just 65 miles (104 kilometers), Zak wrote.
"The lower portion of this elliptical path would take the satellite into a much denser upper atmosphere, causing very quick decay of the orbit and a fiery demise of the spacecraft," he wrote. "The maneuver could've been programmed into the flight assignment of the Volga upper stage before launch in order to reduce space junk after the delivery of the satellite."
NORAD data suggest that Kanopus-ST could fall back to Earth as early as Tuesday (Dec. 8), probably in the Southern Hemisphere, Zak wrote.
The Soyuz that blasted off Saturday also carried another military spacecraft, which Zak identified as "the KYuA-1 radar calibration sphere, which was to be used for radar tests by the Almaz-Antey company, the developer of anti-aircraft and anti-missile systems."
This second satellite is apparently performing normally in its intended orbit, according to Russian media reports.
The crewed variant of the Soyuz rocket family is the only booster that currently launches people toward the International Space Station. (These spaceflyers travel aboard a Russian craft that's also called Soyuz.)
With NASA encouragement and funding, the American spaceflight companies SpaceX and Boeing have been developing their own crew transporation systems to low Earth orbit. NASA hopes that these homegrown systems will be up and running by 2017.
Quelle: SC
Raumfahrt
« Zum vorherigen Eintrag Zum nächsten Eintrag »
2326 Views
Created with page4