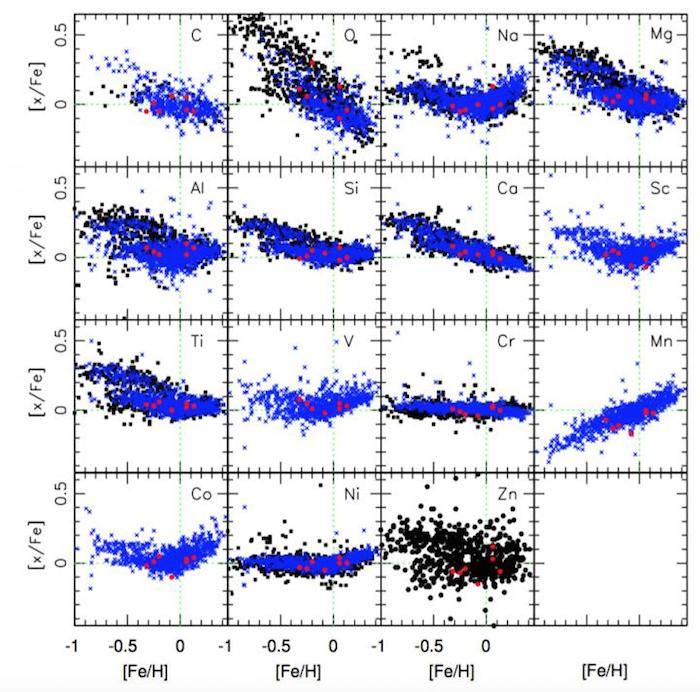 This figure from the paper shows the abundance of different elements in stars versus their abundances of iron. In each square, you can see a plot of the abundance of one element (represented by [x/Fe]) against the abundance of iron (represented by [Fe/H]). Each red dot, black square, or blue X represents a star. The red dots are the small planet-hosting stars studied in this new work. You can see how they do not stand out from the rest of the stars, which were studied in other publications, some of which host planets and some of which have no known planets. The green dashed lines show these values for our Sun.

As astronomers continue to find more and more planets around stars beyond our own Sun, they are trying to discover patterns and features that indicate what types of planets are likely to form around different kinds of stars. This will hopefully inform and make more efficient the ongoing planet hunting process, and also help us better understand our own Solar System's formation.
When a star is young, it is surrounded by a rotating disk of gas and dust, from which its planets form. As such, it's expected that chemical composition of the star should in some way affect the compositions of the planets orbiting it. Indeed, previous research has demonstrated that gas giant planets preferentially form around iron-rich stars. But more recent results have started to suggest that smaller planets do not require such high iron content in their stars to form.
New work from a team including Carnegie's Johanna Teske extended this idea by measuring a large suite of elements besides iron. They found that stars with Earth-sized rocky planets are overall chemically similar to those with Neptune-sized planets, and to stars with no planets, but not to stars with gas giant planets
The team examined the abundance of 19 different elements found in seven stars that are orbited by at least one Earth-like rocky planet, all discovered by NASA's Kepler mission. Their work shows that small rocky planets like Earth do not preferentially form around stars rich in metallic elements such as iron and silicon. The result is surprising because iron and silicon are among the most abundant elements in rocky planets.
Their findings are published by The Astrophysical Journal.
"There has been much ongoing debate about the stellar conditions necessary for planet formation," said lead author Simon Schuler of the University of Tampa. "Our results support the theory that the formation of small, rocky planets can occur around stars with diverse elemental compositions."
"This means that small, rocky planets may be even more commonplace than we previously thought," Teske added.
The planetary-formation from the gas-and-dust disk surrounding a new star as described above has also raised the question of whether the process itself depletes stars of the elements that are concentrated in the planets. If so, this could be used to improve our planet-searching abilities, as looking specifically for stars that show signs of this kind of chemical depletion could narrow the hunt. However, none of the seven stars the team studied displayed this suggested depletion signature.
"Finding small planets can be challenging, so it's a little disappointing that we don't have a clear pointer for finding their host stars," Teske said. She works with Carnegie's Paul Butler on one of the longest-running radial velocity planet searches, in which they are trying to find Earth-like planets. "However, at the same time our results are really exciting because they mean that small planets are very common and chemically diverse."
Teske is presenting his findings at the Extreme Solar Systems III meeting, co-organized by the American Astronomical Society and Northwestern University's Center for Interdisciplinary Exploration and Research in Astronomy (CIERA).
Quelle: SD
Astronomie
2196 Views
Created with page4