Astronomers harnessing the combined power of NASA’s Hubble and Spitzer space telescopes have found the faintest object ever seen in the early universe. It existed about 400 million years after the big bang, 13.8 billion years ago. 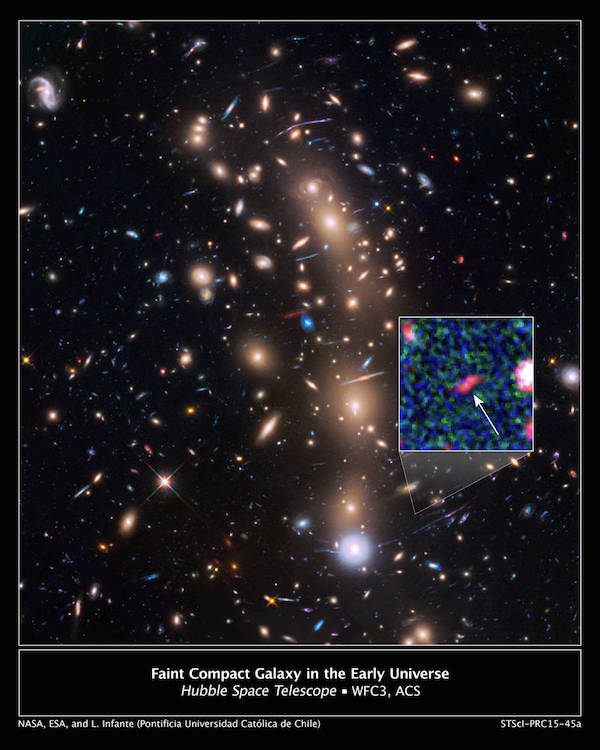 This is a Hubble Space Telescope view of a very massive cluster of galaxies, MACS J0416.1-2403, located roughly 4 billion light-years away and weighing as much as a million billion suns. The inset is an image of an extremely faint and distant galaxy that existed only 400 million years after the big bang. Hubble captured it because the gravitational lens makes the galaxy appear 20 times brighter than normal.
Credits: NASA, ESA, and L. Infante (Pontificia Universidad Catolica de Chile)
The team has nicknamed the object Tayna, which means "first-born" in Aymara, a language spoken in the Andes and Altiplano regions of South America.
Though Hubble and Spitzer have detected other galaxies that are record-breakers for distance, this object represents a smaller, fainter class of newly-forming galaxies that until now have largely evaded detection. These very dim objects may be more representative of the early universe, and offer new insight on the formation and evolution of the first galaxies.
"Thanks to this detection, the team has been able to study for the first time the properties of extremely faint objects formed not long after the big bang," said lead author Leopoldo Infante, an astronomer at the Pontifical Catholic University of Chile. The remote object is part of a discovery of 22 young galaxies at ancient times located nearly at the observable horizon of the universe. This research is a substantial increase in the number of known very distant galaxies.
The results are published in the Dec. 3 issue of The Astrophysical Journal.
The new object is comparable in size to the Large Magellanic Cloud (LMC), a diminutive satellite galaxy of our Milky Way. It is rapidly making stars at a rate ten times faster than the LMC. The object might be the growing core of what will likely evolve into a full-sized galaxy.
The small and faint galaxy was only seen thanks to a natural "magnifying glass" in space. As part of its Frontier Fields program, Hubble observed a massive cluster of galaxies, MACS0416.1-2403, located roughly 4 billion light-years away and weighing as much as a million billion suns. This giant cluster acts as a powerful natural lens by bending and magnifying the light of far more distant objects behind it. Like a zoom lens on a camera, the cluster¹s gravity boosts the light of the distant protogalaxy to make it look 20 times brighter than normal. The phenomenon is called gravitational lensing and was proposed by Albert Einstein as part of his General Theory of Relativity.
Its distance was estimated by building a color profile from combined Hubble and Spitzer observations. The expansion of the universe causes the light from distant galaxies to be stretched or reddened with increasing distance. Though many of the galaxy's new stars are intrinsically blue-white, their light has been shifted into infrared wavelengths that are measurable by Hubble and Spitzer. Absorption by intervening cool intergalactic hydrogen also makes the galaxies look redder.
This finding suggests that the very early universe will be rich in galaxy targets for the upcoming James Webb Space Telescope to uncover. Astronomers expect that Webb will allow us to see the embryonic stages of galaxy birth shortly after the big bang.
Quelle: NASA
Astronomie
2216 Views
Created with page4