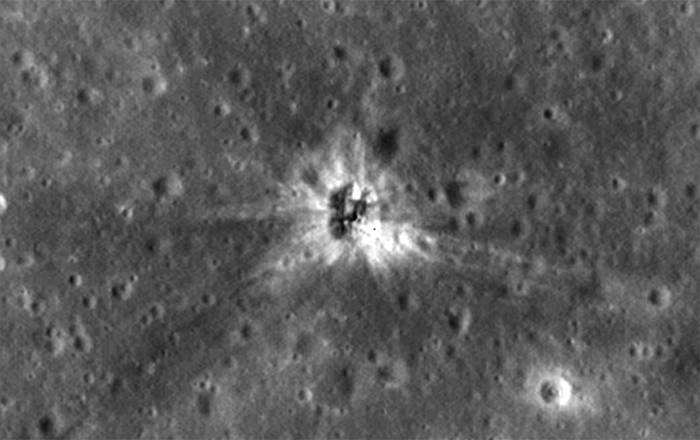 After decades of uncertainty, the Apollo 16 S-IVB impact site on the lunar surface has been identified. S-IVBs were portions of the Saturn V rockets that brought astronauts to the moon. The site was identified in imagery from the high-resolution LROC Narrow Angle Camera aboard NASA's Lunar Reconnaissance Orbiter.
Beginning with Apollo 13, the S-IVB rocket stages were deliberately impacted on the lunar surface after they were used. Seismometers placed on the moon by earlier Apollo astronauts measured the energy of these impacts to shed light on the internal lunar structure. Locations of the craters that the boosters left behind were estimated from tracking data collected just prior to the impacts.
Earlier in the LRO mission, the Apollo 13, 14, 15 and 17 impact sites were successfully identified, but Apollo 16's remained elusive. In the case of Apollo 16, radio contact with the booster was lost before the impact, so the location was only poorly known. Positive identification of the Apollo 16 S-IVB site took more time than the other four impact craters because the location ended up differing by about 30 km (about 19 miles) from the Apollo-era tracking estimate. (For comparison, the other four S-IVB craters were all within 7 km -- about four miles -- of their estimated locations.)
Apollo 16's S-IVB stage is on Mare Insularum, about 160 miles southwest of Copernicus Crater (more precisely: 1.921 degrees north, 335.377 degrees east, minus 1,104 meters elevation).
Quelle: NASA
Raumfahrt
1847 Views
Created with page4