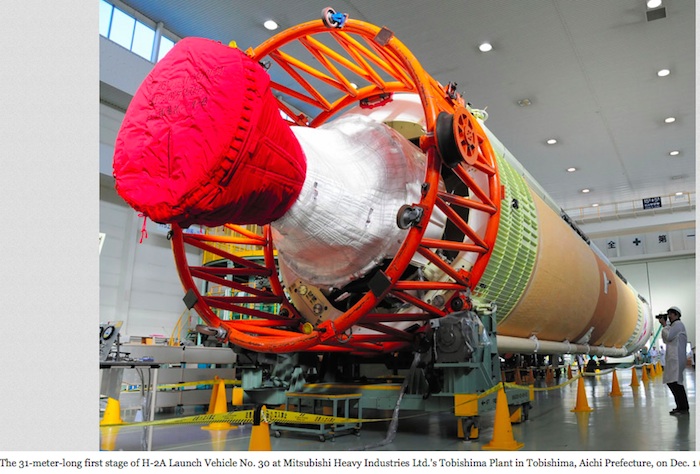 TOBISHIMA, Aichi Prefecture--Following another successful launch, Mitsubishi Heavy Industries Ltd. rolled out its nearly completed 30th H-2A rocket that will carry a satellite designed to study one of the biggest mysteries in the universe.
The 53-meter-tall rocket, assembled at the conglomerate’s Tobishima Plant in Tobishima village, will be transported to the Tanegashima Space Center on Tanegashima island in Kagoshima Prefecture next week at the earliest.
It is scheduled to be launched between January and March next year, carrying a Japan Aerospace Exploration Agency (JAXA) satellite that will study black holes and other astronomical phenomenon.
Its predecessor, H-2A Launch Vehicle No. 29, lifted off on Nov. 24 and increased the success rate of Japan’s mainstay rocket to 96.6 percent.
“The reliability of the rocket is high, even by international standards,” said Koki Nimura, a senior technician at Mitsubishi Heavy Industries, which is in charge of H-2A launches.
Regarding the operation of H-2A Launch Vehicle No. 30, Nimura said, “We hope to mark a definitive launch with our determinations anew.”
Because the JAXA satellite is relatively light, 11 microsatellites built by Nagoya University, the Kyushu Institute of Technology and other institutions are expected to share the ride into space.
Quelle: The Asahi Shimbun
Raumfahrt
1780 Views
Created with page4