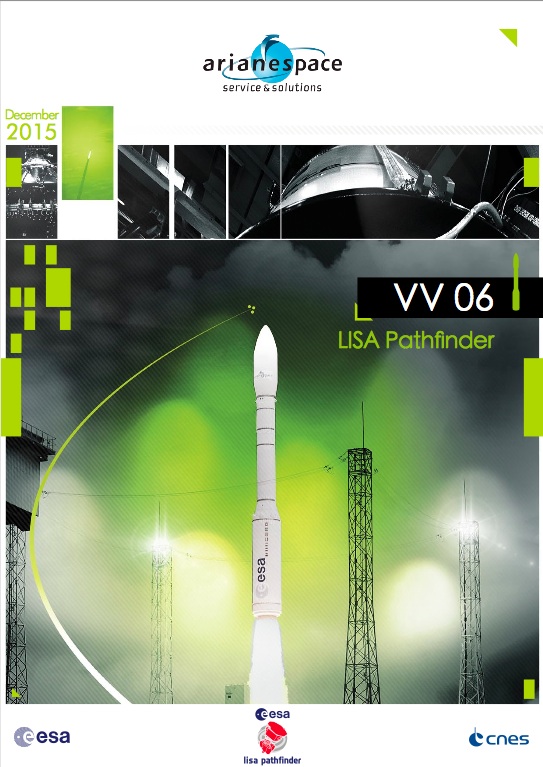 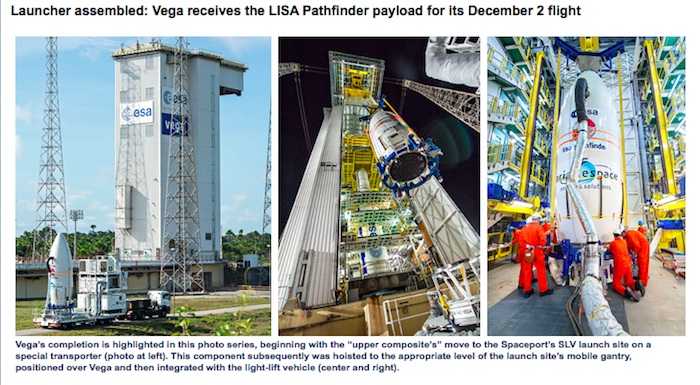 Another Vega launcher has completed its assembly process, marking a major milestone as preparations continue for Arianespace’s 11th mission of the year from Europe’s Spaceport in French Guiana.
This activity concluded with the integration of Vega’s “upper composite,” which consists of the LISA Pathfinder scientific space probe passenger and its protective payload fairing. Installation took place at the Spaceport’s SLV launch site, inside the facility’s protective mobile gantry.
The lightweight Vega is one of three launchers operated by Arianespace from French Guiana, along with the medium-lift Soyuz and heavyweight Ariane 5. Its development was performed in a multinationally-financed European Space Agency program, with the vehicle’s design authority and prime contractor role performed by Italy’s ELV company – a joint venture of Avio and the Italian Space Agency.
Vega entered service in February 2012, and its five missions to date – all successful – have orbited a variety of payloads, ranging from Earth imaging satellites and climate change observation platforms to technology demonstrators and an experimental spaceplane.
LISA Pathfinder was developed in a European Space Agency (ESA) program and built by prime contractor Airbus Defence and Space. Produced to study the ripples in space-time predicted by Albert Einstein’s General Theory of Relativity, it will be placed in an initial elliptical Earth orbit on the December 2 Vega mission – which is designated Flight VV06 in Arianespace’s numbering system.
The spacecraft’s own propulsion module will then be utilized to reach the operational orbit around the first Sun-Earth Lagrange point (L1) – located approximately 1.5 million kilometers from Earth. LISA Pathfinder’s total liftoff mass is estimated at 1,906 kg.
.

Quelle: arianespace
-
Update: 1.12.2015
.
Vega is cleared for its December 2 liftoff with LISA Pathfinder to study the ripples in space-time
Following today’s launch readiness review at the Spaceport in French Guiana, Arianespace’s lightweight Vega has been given the go-ahead for its mission Wednesday to orbit the European Space Agency’s pioneering LISA Pathfinder technology demonstrator.
This regular step in Arianespace’s pre-launch preparations confirmed that the Vega launcher and its LISA Pathfinder payload are ready for flight, along with the Spaceport’s infrastructure, and the downrange tracking station network.
As Arianespace’s 11th total mission so far this year across its complete family of Vega, Ariane 5 and Soyuz vehicles, Wednesday’s early-morning launch – designated Vega Flight VV06 in the company’s numbering system – will lift off at exactly 1:15 a.m. local time in French Guiana.
Following liftoff from the Spaceport’s SLV complex, the powered phase of Vega’s first three stages will last six and a half minutes, before separation of the upper composite with the AVUM (Attitude & Vernier Upper Module) stage, payload adapter and LISA Pathfinder.
Approximately one minute later, the AVUM will ignite for its first burn – lasting almost nine minutes – which is to be followed by a ballistic phase of about 85 minutes. Finally, the AVUM will perform a second powered phase of some one and a half minutes, in advance of LISA Pathfinder’s deployment into an elliptical low-Earth parking orbit to complete the one-hour, 45-minute mission.
LISA Pathfinder is a technology demonstrator developed in a European Space Agency program and built by prime contractor Airbus Defence and Space. After being orbited by Vega, this space probe will utilize its own propulsion module to reach an operational orbit around the first Sun-Earth Lagrange point (L1), from where it will study the ripples in space-time predicted by Albert Einstein’s General Theory of Relativity.
Flight VV06 will be Vega’s sixth overall mission since it entered service in 2012, and the lightweight vehicle’s third launch this year.
.

Quelle: arianespace
---
ESA’s LISA Pathfinder lifted off earlier today on a Vega rocket from Europe’s spaceport in Kourou, French Guiana, on its way to demonstrate technology for observing gravitational waves from space.
Gravitational waves are ripples in the fabric of spacetime, predicted a century ago by Albert Einstein’s General Theory of Relativity, published on 2 December 1915.
Einstein’s theory predicts that these fluctuations should be universal, generated by accelerating massive objects. However, they have not been directly detected to date because they are so tiny. For example, the ripples emitted by a pair of orbiting black holes would stretch a million kilometre-long ruler by less than the size of an atom.
LISA Pathfinder will test the extraordinary technology needed to observe gravitational waves from space. At its core is a pair of identical 46 mm gold–platinum cubes separated by 38 cm, which will be isolated from all external and internal forces acting on them except one: gravity.
The mission will put these cubes in the purest free-fall ever produced in space and monitor their relative positions to astonishing precision, laying the foundations for gravitational wave observatories in space.
Such future missions will be key partners to the ground sites already searching for these elusive cosmic messengers. Space and ground experiments are sensitive to different sources of gravitational waves, both opening up new possibilities to study some of the most powerful phenomena in the Universe.
The Vega launcher lifted off at 04:04 GMT (05:04 CET). About seven minutes later, after separation of the first three stages, the first ignition of Vega’s upper stage propelled LISA Pathfinder into a low orbit, followed by another ignition about one hour and forty minutes into the flight.
The spacecraft separated from the upper stage at 05:49 GMT (06:49 CET). Controllers at ESA’s operations centre in Darmstadt, Germany then established control.
Over the next two weeks, the spacecraft itself will raise the orbit’s highest point in six critical burns.
The final burn will propel the spacecraft towards its operational location, orbiting around a stable virtual point in space called L1, some 1.5 million kilometres from Earth towards the Sun.
Quelle: ESA
Raumfahrt
2316 Views
Created with page4