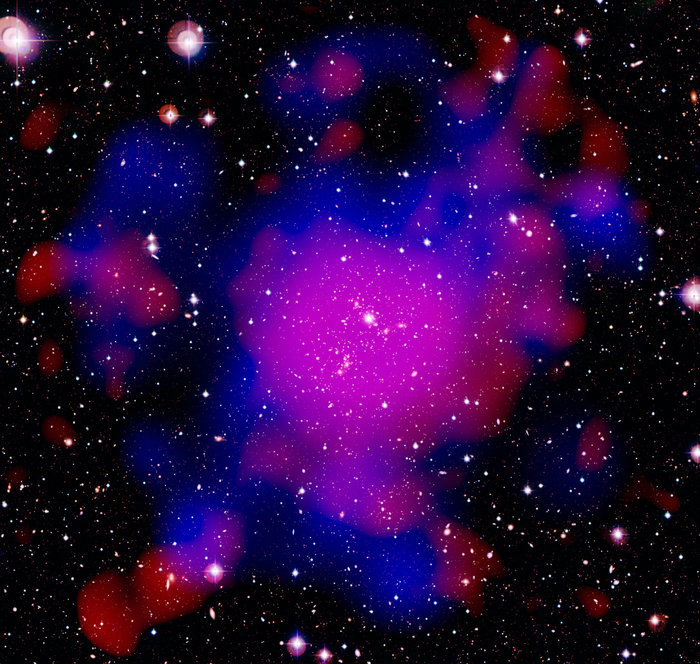 ESA’s XMM-Newton X-ray observatory has revealed three massive filaments of hot gas flowing towards a cluster of galaxies, uncovering a portion of the cosmic skeleton that pervades the entire Universe.
Galaxies tend to congregate, forming groups and even larger agglomerates called clusters. These clusters are the most massive cosmic structures held together by gravity. As well as galaxies, they contain large amounts of hot gas and even larger amounts of invisible dark matter.
On a grander scale, galaxies and galaxy clusters appear to be linked in a gigantic filamentary network, with the most massive clusters sitting in the densest hubs of this ‘cosmic web’.
Computer simulations indicate that the cosmic web, which consists primarily of dark matter and some ordinary matter, behaves as the scaffolding of the cosmos, providing the framework for stars, galaxies and clusters to form and evolve.
In the past few decades, astronomers have detected the threadlike structure of the cosmic web in the large-scale distribution of galaxies, and found hints that diffuse gas is arranged in a similar way.
A new study using ESA’s XMM-Newton X-ray observatory has now uncovered a handful of filaments made of galaxies, gas and dark matter that are flowing towards one of the most massive galaxy clusters in the Universe, obtaining the first, unambiguous detection of gas in the cosmic web.
“This was an unexpected and most welcome discovery,” says Dominique Eckert of the University of Geneva, Switzerland, lead author of the paper reporting the new results in the journal Nature this week.
The object of the study is Abell 2744, which has been nicknamed the Pandora Cluster owing to its complex and jumbled structure. It is composed of at least four smaller components that are merging.
“We knew that this is an incredibly massive cluster hosting active processes at its core, and seeing its direct connection to the cosmic web confirms our picture of how structures form in the Universe,” adds Dr Eckert.
From 30 hours of observations by XMM-Newton in December 2014, the astronomers detected five large structures of hot gas that seem to be linked to the core of Abell 2744.
Comparing the X-ray data with optical observations, they identified the galaxies that belong to the various filaments, recognising that three of them are physically connected to the cluster, while the other two are the projection of more distant structures viewed along the same line of sight.
.

Four galaxy clusters embedded in the cosmic web, the wispy network of both dark and baryonic matter that is believed to pervade the Universe. This image was extracted from a numerical simulation of the formation and evolution of cosmic structure.
Four very massive galaxy clusters are visible where the concentration of galaxies (shown in white and purple) is higher. Two of the clusters, in the lower left corner of the image, are in the early phases of a merging process; the other two clusters can be seen in the central part of the image, just above the centre. The filamentary structure formed by the four clusters extends toward the right side of the image, where several less massive systems can be seen.
Galaxy clusters form in the densest knots of the cosmic web, where filaments intersect. The density of gas in the filaments that link the clusters is represented with different colours, with dark brown indicating less dense regions and brighter colours (from orange to yellow and green) indicating increasingly denser regions.
The image shows a portion of the cosmic web that spans about 260 million light-years across.
Quelle: ESA
Astronomie
2549 Views
Created with page4