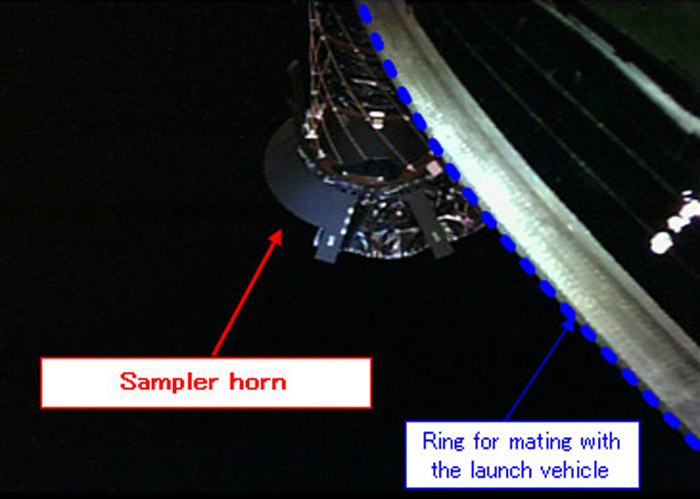 Sampler horn deployment images taken by the Hayabusa2 onboard monitoring camera thanks to your donations.
(This image is test data received through the test RF data transmission sent to the Hayabusa2 RF station.)
-
Asteroid Explorer "Hayabusa2" Completion of Critical Operation Phase
The Japan Aerospace Exploration Agency (JAXA) confirmed the completion of a sequence of the important operations for the Asteroid Exploration “Hayabusa2” mission including the deployment of the horn part of the sampler that captures samples from the asteroid’s surface, the release of the locks for the launch that ratchet the gimbal that controls the direction of the ion engine, and functional verification of the three-axis stabilization controls and the ground precision orbit determination system. With this confirmation, the critical operation phase* of the Hayabusa2 was completed.
The sampler horn deployment was confirmed by images taken by the onboard small monitor camera that was manufactured and loaded onto the Hayabusa2 thanks to donations for the Hayabusa2 mission from many of you. We would like to express our deepest gratitude to all of you again.
(Please refer to the attachment for the images.)
The explorer is now in a stable condition.
The explorer will move to the initial functional verification operation phase to verify the function of the satellite onboard instruments for about three months.
We would like to express our sincere appreciation to all parties and personnel concerned for their support and cooperation with the Hayabusa2 launch and tracking control operations. In addition, we would also like to ask for your continued cooperation and support for the long-term Hayabusa2 space exploration mission.
*1 Critical operation phase
The critical operation phase is a period from the separation from the launch vehicle till the establishment of the stable operation in space including the deployment of the solar array paddles and verification of the attitude control system and tracking and control facility functions.
.
Raumfahrt
3153 Views
Created with page4