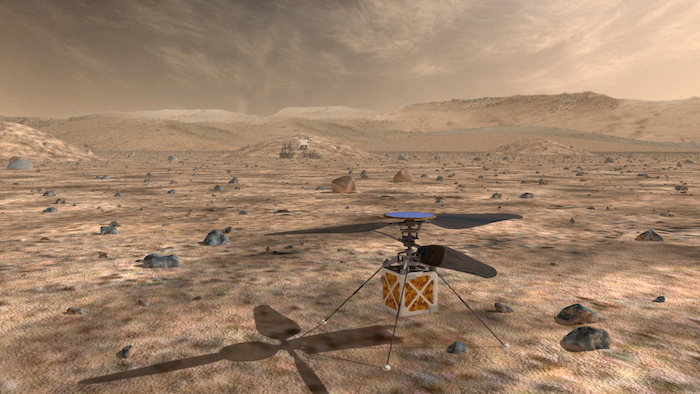 Artist’s conception of the helicopter-like drone which could accompany the Mars 2020 Rover. Image Credit: NASA
Over the past few years, numerous orbiters, landers and rovers have been sent to Mars, revealing the world as never before. There is, however, something else which hasn’t been done yet – a helicopter, airplane or balloon. An airborne probe could provide stunning views of the Martian surface between those of a lander/rover and an orbiter at much higher altitude. The concept has been considered and tested to some degree, and now it may be moving closer to becoming a reality. The latest studies involve the possibility of sending a small helicopter-like drone along with the Mars 2020 Mission rover.
Nothing has been confirmed yet, but the idea was mentioned again by JPL Director Charles Elahchi, on Nov. 19, 2015.
-
“It’s not approved for that mission yet, but we are doing the technology which will enable us to actually have a drone which will fly around the rover, survey the area in front of it and enable the rover to basically drive more efficiently,” Elahchi said. “So you’ll have a drone taking the survey and sending the data to the rover and having the rover avoid hazards.” He made the comments after a luncheon speech on Capitol Hill hosted by the Space Transportation Association.
A video posted by NASA last January gives an overview of the mission concept. The drone would act as a scout for the rover, flying ahead to check out various possible points of interest and also help engineers to plan the best driving route. It could even help the rover to travel farther each day than is possible with current rovers now, perhaps even tripling the distance. It would also help the rover find places to take and cache samples of rock and soil. As currently envisioned, the drone would be solar powered, weigh 2.2 pounds (1 kilogram) and measure 3.6 feet (1.1 meters) across from the tip of one blade to the other; it would resemble a medium-size cubic tissue box. The drone would probably fly for just two or three minutes per day. A proof-of-concept technology demonstration has already been done at NASA’s Jet Propulsion Laboratory in Pasadena, California, where a scale model of the helicopter was flown in a Mars atmosphere chamber.
Any drone destined for Mars however would need to be specially designed to stay aloft in the thin atmosphere. But while challenging, it is certainly possible. If it does go ahead, this would be the first time such a concept aircraft would be included on any Mars mission.
“By March of next year – we’re actually building a full-scale helicopter, 1 kilogram size – we’re going to put it in a chamber and simulate, exactly, the Mars atmosphere,” Elachi said. “We have done some tests and we’re confident it will [fly].”
“[W]e’re going to put it in a chamber and simulate, exactly, the Mars atmosphere,” Elahchi said in a statement to SpaceNews. “We have done some tests and we’re confident it will [fly].”
As Guy Webster at JPL also told AmericaSpace:
“JPL is conducting proof-of-concept testing for the helicopter in a simulated environment, developing concepts for how it might be accommodated and deployed by a Mars rover, and exploring potential sources of funds.”
. 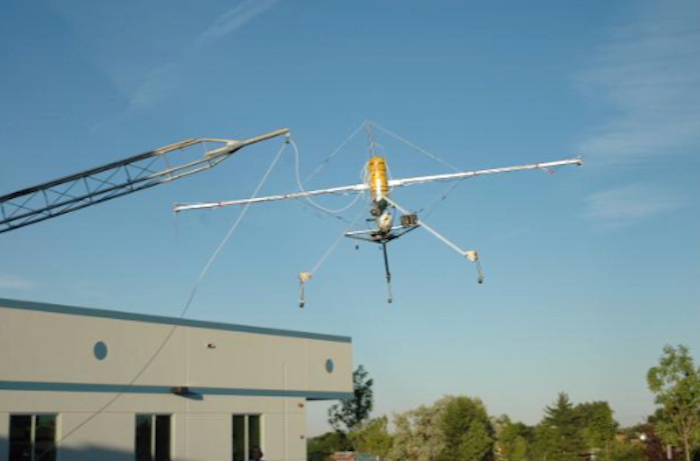 The Mars Gas Hopper is another previous prototype for an aerial vehicle which could fly in Mars’ atmosphere. Photo Credit: Robert Zubrin/Pioneer Astronautics
.
The concept for a Mars helicopter isn’t brand new however. Another larger version was being tested way back in 1994, by Robert Zubrin, an aerospace engineer who developed the well known “Mars Direct” blueprint for human missions and founded The Mars Society. As he told AmericaSpace, “I was looking at a larger helicopter design, with a mass of about 50 kg. It was meant to be an independent robotic vehicle, capable of flying about 10 km at a time. Each time it would land, it would take several days to recharge its batteries and then fly again to a new place.”
That project never materialized into an actual mission though, as noted by Zubrin:
“We didn’t do anything with it. We decided to go with a proposal for a Mars Aerial Platform (balloon) mission instead, because it could keep flying for months and span the globe.”
Mars Aerial Platform (MAP) was designed to be a low-cost Discovery class mission which would “generate tens of thousands of very high-resolution (20 cm/pixel) pictures of the Martian surface, map the global circulation of the Martian atmosphere, and examine the surface and sub-surface with ground penetrating radar, infrared spectroscopy, neutron spectroscopy, and other remote sensing techniques.” The balloons would fly at a nominal altitude of about 7 km above the surface. Thanks to new technology, the balloons could last for hundreds or even thousands of days. MAP would work together with the Mars Environmental Survey (MESUR) surface network science mission. Even though that mission also never happened, the technology involved could still be used for a future balloon mission to Mars.
Later, in 20102, Zubrin later went on to develop yet another aerial prototype called the Mars Gas Hopper.
“Later, at Pioneer Astronautics, I developed an alternative concept, called a Mars Gas Hopper, which used hot CO2 acquired from the Mars atmosphere for rocketplane or VTOL propulsion.”
MGH would be a novel “flight and surface exploration vehicle that utilizes indigenous CO2 propellant to enable greatly enhanced mobility.” As explained in the published paper:
“The gas hopper will first retrieve CO2 gas from the Martian environment to store it in liquid form at a pressure of about 10 bar. When enough CO2 is stored to make a substantial flight to another Mars site, a hot pellet bed is heated to ~1000 K and the CO2 propellant is warmed to ~300 K to pressurize the tank to ~65 bar. A valve is then opened, allowing the liquid CO2 to pass through the hot pellet bed that heats and gasifies the CO2 for propulsion. Both ballistic hopper and winged gas hopper airplanes are possible, with the former offering greater simplicity and the latter longer range. In the case of winged gas hoppers, the hot gas would be piped to a set of thrusters beneath the aircraft, allowing vertical takeoff, after which the gas is shunted off to a primary rearward pointing thruster to generate forward flight speed. The hot gas system is also used for attitude control and main propulsion during landing.”
As to the new drone concept currently being considered, Zubrin posted on Twitter, “An excellent idea. I analyzed an electric Mars helicopter at Lockheed Martin in 1994. It’s feasible.”
. 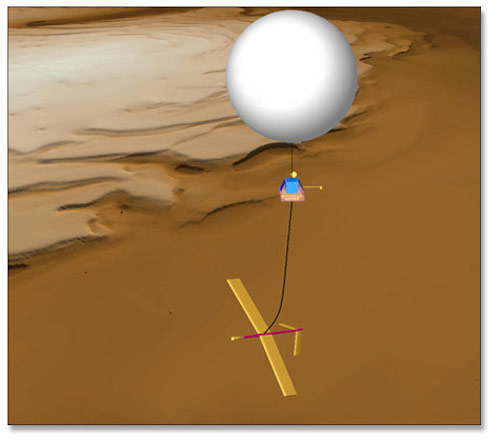 Another way to explore Mars by air would be with balloons. This concept balloon is from Global Aerospace Corporation in 2004, from a presentation entitled Mars Exploration with Directed Aerial Robot Explorers. Image Credit: Global Aerospace Corporation
.
As previously reported in AmericaSpace, NASA is also planning to develop an airplane prototype which could fly in the thin Martian atmosphere. The concept, called the Preliminary Research Aerodynamic Design to Land on Mars (Prandtl-m), is basically a flying wing. The first major test is planned for later this year, where a prototype will be released from a high-altitude balloon at about 10,000 feet altitude, where conditions are similar to the atmosphere on Mars. Other Mars airplane concepts include the Aerial Regional-scale Environmental Survey (ARES).
“The aircraft would be part of the ballast that would be ejected from the aeroshell that takes the Mars rover to the planet,” said Al Bowers, NASA Armstrong chief scientist and Prandtl-m program manager. “It would be able to deploy and fly in the Martian atmosphere and glide down and land. The Prandtl-m could overfly some of the proposed landing sites for a future astronaut mission and send back to Earth very detailed high-resolution photographic map images that could tell scientists about the suitability of those landing sites.”
“The actual aircraft’s wingspan when it is deployed would measure 24 inches and weigh less than a pound. With Mars gravity 38 percent of what it is on Earth, that actually allows us up to 2.6 pounds and the vehicle will still weigh only 1 pound on Mars. It will be made of composite material, either fiberglass or carbon fiber. We believe this particular design could best recover from the unusual conditions of an ejection,” Bowers added.
. 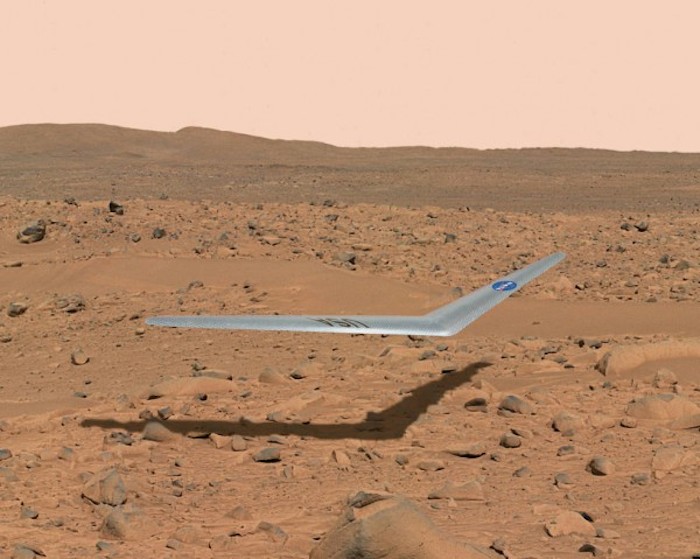 Artist’s conception of the Prandtl-m airplane flying above the surface of Mars. Image Credit: NASA Illustration/Dennis Calaba
-
The amount of time the aircraft would be in the air would be quite short however.
“It would have a flight time of right around 10 minutes. The aircraft would be gliding for the last 2,000 feet to the surface of Mars and have a range of about 20 miles,” Bowers said.
Whether using drones, balloons or airplanes, it would seem that the future exploration of Mars will almost certainly use airborne probes of some sort, filling in a gap between surface rovers/landers and orbiting spacecraft. Along with unique, scenic views, they will provide new opportunities for data gathering as well, helping scientists to better understand Mars’ environment and potential for life, both past and present.
Quelle: AS
Mars-Chroniken
1900 Views
Created with page4