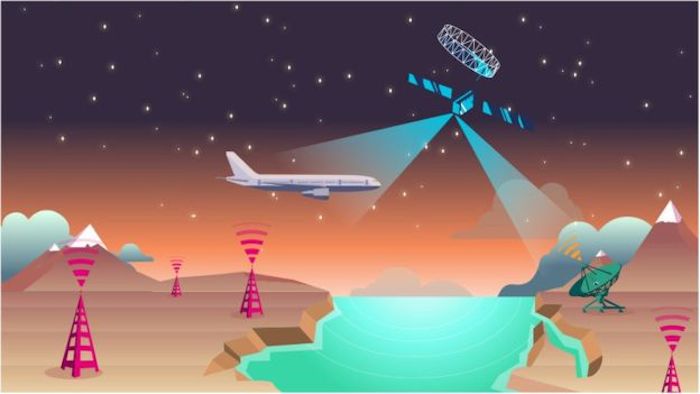 Under the contract, which runs for 10 years, Lufthansa will equip more than 150 of its aircraft for Global Xpress, with the first planes to be ready for testing starting in mid-2016.
In a second agreement, which is not yet a firm commitment, Lufthansa in 2017 will conduct trials of Inmarsat’s air-to-ground European Aviation Network (EAN). EAN features a single satellite in geostationary orbit over Europe, linked with several hundred terrestrial signal boosters, to provide broadband to aircraft using S-band.
London-based Inmarsat has said Europe’s air corridors are too heavily packed to provide acceptable broadband without a ground-based segment. The company’s S-band satellite is under construction, and Inmarsat is nearing completion of the licenses needed to operate in all 28 European Union nations.
Neither Lufthansa nor Inmarsat would disclose who is financing the addition of Global Xpress terminals on the Lufthansa fleet.
Lufthansa has said its Lufthansa Technik division will take charge of the work, and that the Lufthansa Systems division will manage aircraft network operations and the creation of an Internet portal through which passengers will get on line.
Lufthansa has long been one of the most aggressive airlines in terms of broadband access. More than a decade ago it was a major partner for Boeing’s Connexion broadband project, which proved too expensive for Boeing to continue and was subsequently abandoned.
Inmarsat’s Global Xpress, with both military and civil Ka-band capacity, consists of three satellites in geostationary orbit.
Concluding the contract with Lufthansa, with the possibility of Lufthansa being an early adopter of EAN, gives Inmarsat a key partner in what has become a frenetic race by a half-dozen companies to line up airlines to their satellite-based services.
Gogo, Global Eagle Entertainment and Thales Live TV are among the companies that could either partner or compete with Inmarsat for airline connectivity, depending on the market. Panasonic Avionics of Lake Forest, California, is a competitor.
The battle for airline contracts and market share — a key metric given the fixed-cost nature of satellite services — is occurring before a clear business model has emerged among the airlines as to who owns the customer, and how involved an airline should be in what is essentially a telecommunications business.
The airlines also must decide whether they see an advantage in Ku-band or Ka-band. Ku-band is generally viewed as operating better in heavy rains, when aircraft are on the tarmac or below the clouds. Ka-band, in some areas of the world, is less crowded with current users than Ku-band.
Panasonic Avionics is using Ku-band, buying large chunks of satellite capacity with fleet operators Intelsat and Eutelsat, among others.
In an Oct. 8 presentation to investors, Leo Mondale, president of Inmarsat’s aviation division, said Inmarsat views Panasonic, with its background as a large provider of in-flight entertainment services, as is biggest adversary.
“Panasonic feels a lot of pressure from broadband connectivity on their in-flight-entertainment model, which includes very big, heavy, expensive equipment and a constrained access to content — which is the opposite of the bring-your-own-device model. Obviously that’s got them a bit nervous and they’re trying to control this market.
“We’re up against a very large, focused, profitable operator that is doing everything they can to preserve their position, understandably.”
Mondale said every aircraft in Lufthansa’s fleet represents 1,000 passenger opportunities per day for an Internet provider, assuming each plane makes about five flights daily. The European market is too dense to be served by satellite alone, he said.
Quelle: SN
Luftfahrt
2327 Views
Created with page4