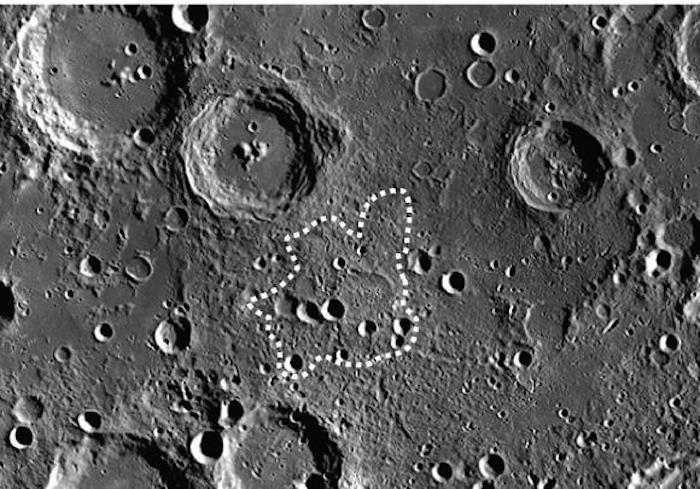 Mysterious Mound
Volcanic processes touched off by a massive impact appear to have created Mafic Mound, a strange feature near the Moon's south pole.
Image: NASA/Goddard/Arizona State University
.
Within a giant impact basin near the Moon’s south pole, there sits a large mound of mysterious origin. Research by Brown University geologists suggests that the mound was formed by unique volcanic processes set in motion by the impact that formed the basin.
PROVIDENCE, R.I. [Brown University] — A giant mound near the Moon’s south pole appears to be a volcanic structure unlike any other found on the lunar surface, according to new research by Brown University geologists.
The formation, known as Mafic Mound, stands about 800 meters tall and 75 kilometers across, smack in the middle of a giant impact crater known as the South Pole-Aitken Basin. This new study suggests that the mound is the result of a unique kind of volcanic activity set in motion by the colossal impact that formed the basin.
“If the scenarios that we lay out for its formation are correct, it could represent a totally new volcanic process that’s never been seen before,” said Daniel Moriarty, a Ph.D. student in Brown’s Department of Earth, Environmental and Planetary Sciences and the study’s lead author.
The research has been accepted for publication in Geophysical Research Letters, a publication of the American Geophysical Union, and is available online.
Mafic Mound (mafic is a term for rocks rich in minerals such as pyroxene and olivine) was first discovered in the 1990s by Carle Pieters, a planetary geologist at Brown and Moriarty’s adviser. What makes it curious, other than its substantial size, is the fact that it has a different mineralogical composition than the surrounding rock. The mound is rich in high-calcium pyroxene, whereas the surrounding rock is low-calcium.
. 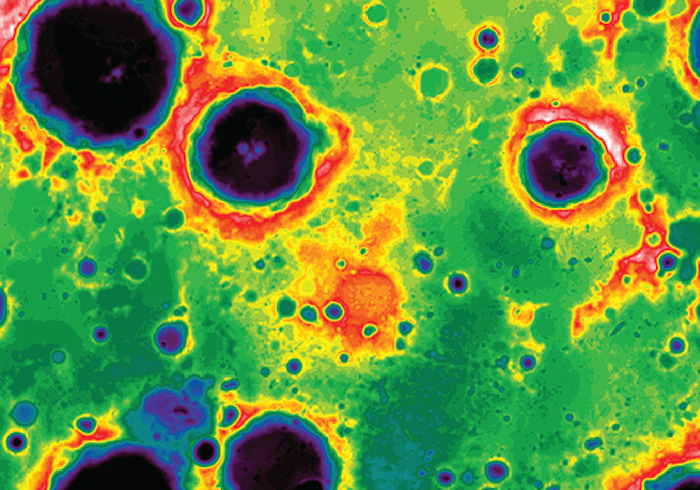 A volcanic structure
A topographic view of the South Pole-Aitken Basin. Reds are high; blues are low. Mafic Mound, (the reddish area in the center) stands 800 meters above the surrounding surface.
Image: NASA/Goddard/MIT/Brown
.
“This unusual structure at the very center of the basin begs the question: What is this thing, and might it be related to the basin formation process?” Moriarty said.
To investigate that, Moriarty and Pieters looked at a rich suite of data from multiple lunar exploration missions. They used detailed mineralogical data from the Moon Mineralogy Mapper, which flew aboard India’s Chandrayaan-1 spacecraft. NASA’s Lunar Orbiter Laser Altimeter provided precise topographic data, and data from the GRAIL mission characterized gravitational anomalies in the region.
Those combined datasets suggested that Mafic Mound was created by one of two unique volcanic processes set in motion by the giant South Pole-Aitken impact. An impact of that size would have created a cauldron of melted rock as much as 50 kilometers deep, some researchers think. As that sheet of impact melt cooled and crystalized, it would have shrunk. As it did, still-molten material in the middle of the melt sheet may have been squeezed out the top like toothpaste from a tube. Eventually, that erupted material may have formed the mound.
Such a process could explain the mound’s strange mineralogy. Models of how the South Pole-Aitken melt sheet may have crystalized suggest that the erupting material should be rich in high-calcium pyroxene, which is consistent with the observed mineralogy of the mound.
Another scenario that fits the data involves possible melting of the Moon’s mantle shortly after the South Pole-Aitken impact. The impact would have blasted tons of rock out of the basin, creating a low-gravity region. The lower gravity condition could have enabled the center of the basin to rebound upward. Such upward movement would have caused partial melting of mantle material, which could have erupted to form the mound.
These scenarios make for a strong fit to those very detailed datasets, Moriarty said. And if either is true, it would represent a unique process on lunar surface. Moriarty said a sample return mission to the South Pole Aitken Basin would be a great way to try to verify the results. The basin has long been an interesting mission target for lunar scientists.
“It’s the largest confirmed impact structure in the solar system and has shaped many aspects of the evolution of the Moon,” Moriarty said. “So a big topic in lunar science is studying this basin and the effects it had on the geology of the Moon through time.”
A sample return mission to the basin could bring back bits of lunar mantle, the composition of which is still not fully understood. A returned sample could also put a firm date on when the impact occurred, which could be used as a standard to date other features on the surface.
And in light of this work, a sample could also help to shed light on a unique lunar volcanic process.
Quelle: Brown University
Astronomie
2143 Views
Created with page4