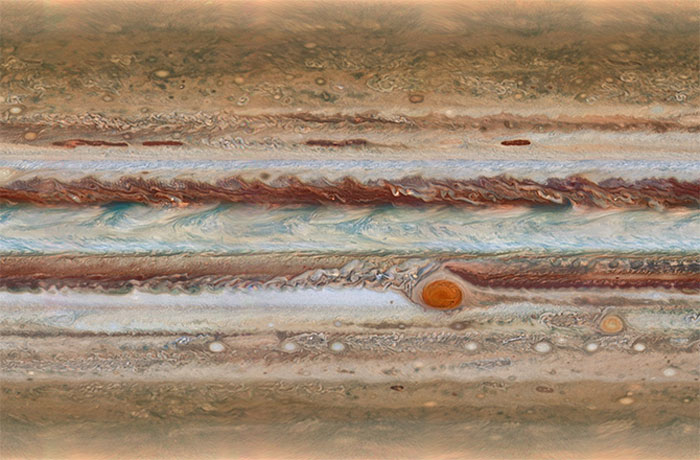 This new image of Jupiter was made during the Outer Planet Atmospheres Legacy (OPAL) program. The images from this program make it possible to determine the speeds of Jupiter’s winds, to identify different phenomena in its atmosphere and to track changes in its most famous features, like its Great Red Spot.
NASA, ESA, A. SIMON (GSFC), M. WONG (UC BERKELEY), AND G. ORTON (JPL-CALTECH)
-
Over a 10 hour period, the Hubble Space Telescope gazed at the solar system’s largest planet to produce one of the most spectacular maps of Jupiter’s complex and dynamic atmosphere. Immediately astronomers were able to measure the size of the planet’s shrinking Great Red Spot and notice some mysterious structures along the way.
Jupiter’s trademark red spot is actually a very long duration storm that has been rumbling south of the planet’s equatorial region for at least 300 years, since before the dawn of modern astronomy. However, the storm is weakening, causing the spot to shrink. Although the rate of shrinkage has recently slowed, the spot is 240 kilometers (150 miles) smaller than it was last year. 100 years ago, the spot was around 40,000 kilometers (25,000 miles) wide, it is now less than half that width.
As the spot has shrunk, it’s color has also become more anemic, losing some of its redness. Also, as these new Hubble observations show, a strange wispy structure has formed inside the storm, becoming warped by the high-speed winds that have been clocked at a speed of 540 kilometers (335 miles) per hour. Astronomers, so far, have little explanation as to what this feature is or what caused it.
.

Animation of two maps of Jupiter's atmosphere observed by Hubble. One map was imaged on Jan. 19, 2015, from 2:00 UT to 12:30 UT and the second map was imaged on the same day between 15:00 UT to 23:40 UT. The creation of 2 maps allow astronomers to see the motion of gases in Jupiter's complex atmosphere.
NASA, ESA, A. SIMON (GSFC), M. WONG (UC BERKELEY), AND G. ORTON (JPL-CALTECH). ANIMATION BY IAN O'NEILL/DISCOVERY NEWS.
-
Another oddity has been spied just north of the planet’s equator — a wave-like structure has formed, something that hasn’t been seen since the Voyager 2 flyby in 1979. During that flyby, these waves were assumed to be a transient event and the fact the spacecraft imaged them was a fluke. But they’ve now returned, no doubt sparking some huge interest as to their origins.
One theory suggests that these are baroclinic waves, which often form in the Earth’s atmosphere as cyclones begin to form. As these Jovian waves are located in a region of cyclones and anticylones, it seems possible that they are baroclinic waves that are propagating upward into the upper cloud deck.
.