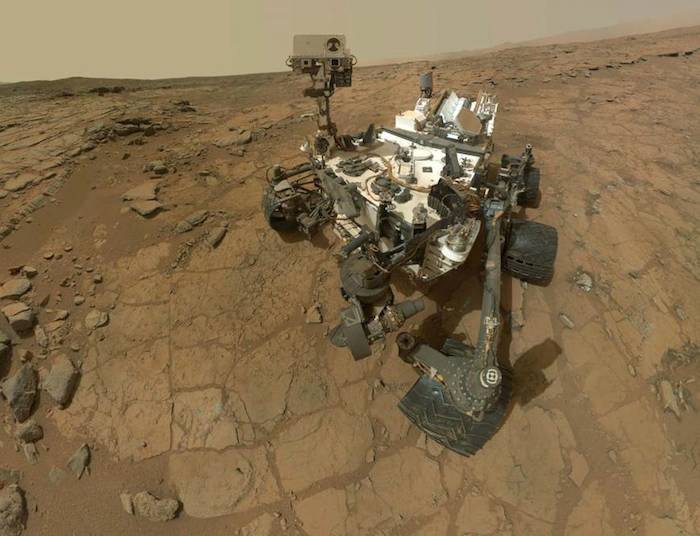 PARIS – A multibillion-dollar robot dispatched to Mars to search for life must steer clear of promising “hot spots” for fear of spreading microbes from Earth, NASA project scientists said Thursday.
The specter of a missed opportunity was thrown into sharp relief by smoking-gun evidence unveiled this week that liquid water, a prerequisite for life, existed not only in a distant Martian past, but is likely there today.
“Curiosity isn’t designed to go to a place that can currently support microbial life,” said Michael Meyer, a scientist for NASA’s Mars Exploration Program.
“For that we need a higher level of cleanliness,” which is more complicated and costly to achieve, he told AFP.
This exasperating reality was the result of a fateful decision years ago to forgo NASA’s most stringent microbe-removal standards for hardware visiting the moist environments in which Martian life — if it exists — will probably be found.
The danger of letting Curiosity investigate the newly found sites is real, space scientists and astrobiologists agree.
“We don’t want to be remembered as the species that went to another planet and wiped out whatever life was there,” explained Jorge Vago, a scientist with the European Space Agency’s (ESA) ExoMars Project, due to send its own Mars orbiter up in 2016 and put down a rover in 2018.
Scientists announced Monday they had found tracks formed by hydrated salt crystals — essentially super-salty brine — running down steep slopes on the surface of the Red Planet.
NASA’s Curiosity rover, a car-sized mobile laboratory that parachuted into the Red Planet’s Gale Crater in August 2012, is especially well-equipped for microbe-hunting in just such an environment.
Its core mission is to gather soil and rock samples and analyze them “for organic compounds and environmental conditions that could have supported life now or in the past,” according to NASA.
But the streaks, dubbed “recurring slope lineae” (RSL) — possibly the best chance yet of finding Martian life — are off limits for one simple reason: Curiosity is too dirty.
Adding insult to injury, the first spacecraft NASA landed on Mars some 40 years ago, dubbed Viking, met the highest cleanliness requirement, even if it never had the same golden opportunity to detect life.
“The missions we have sent since Viking have not been cleaned to the same level — Viking was essentially sterile,” said Catharine Conley, who heads NASA’s office of planetary protection, set up to prevent cross-contamination between Earth and the Solar System’s other heavenly bodies.
“It would be very nice to have that capability again, to be able to drive right into the RSLs and sample (them),” she added.
Beyond NASA’s even more stringent standards, space agencies are bound by an international treaty to “avoid harmful contamination” in space exploration.
Earth bacteria hitching a ride on spacecraft “could under certain circumstances find conditions (in which) they could prosper. That’s a no-no,” said Vago.
“We also try to kill all the bacteria on these probes so that we don’t wind up… embarrassingly discovering life on Mars only to realize that it’s our own dirty fingerprints,” added Conley.
Sterilizing a space-destined probe to the safest level is expensive.
And when Curiosity was designed, well before its 2011 launch, chances for an inter-planetary meeting of species seemed more remote than they do today.
“We had not yet confirmed the presence of surface water on Mars,” noted Jim Watzin, the director of NASA’s Mars Exploration Program.
“Curiosity was designed to follow up on earlier NASA rover findings that had determined, via geology, that the surface of Mars had significant bodies of water in its ancient past, but not in the present,” he told AFP by email.
Another factor was that the techniques used to sterilize Viking’s hardware — essentially baking it at a high temperature for several days — would damage or destroy electronic equipment on newer designs like Curiosity.
But the mobile lab can still use remote sensors to gather information on the RSLs from a distance, said Watzin.
“It is a question of budget and priorities,” noted Conley. “If you can do interesting science at a lower budget, people will tend to prefer that.”
NASA’s next mission to the Red Planet, Mars 2020, was also not designed to super-clean specs, Watzin said, and making a change now may cause unacceptable delays.
Quelle: The Japan Times
Mars-Chroniken
2449 Views
Created with page4