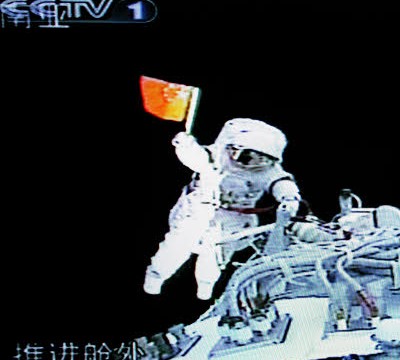 Beijing, Sep 30 (PTI) China's ambitious space programme focusing on Moon missions today came under rare criticism from the official media after NASA's announcement of existence of flowing water on Mars, where India sent its Mangalyaan becoming the first country in Asia to reach the red planet.
Terming NASA's announcement of finding the water on Mars "like a bomb that shocked the world", state-run Global Times in its editorial said, "although some remain skeptical of the conclusions, NASA's claim has shown serious progress in scientific exploration."
The US has sent more than 20 spacecraft to the Mars since 1964, among which several probes have landed on the surface of the red planet. The Curiosity is still roving Mars and sending back information.
"NASA is leaving the other space competitors far behind," it said in editorial 'China should dream big in outer space'.
"NASA's far sight and one discovery after another have met our curiosity and gained respect from the world, including the Chinese people. At the same time, its discoveries gives us a sense of urgency," it said.
China was the third country to send an astronaut into space.
"China's Mars probe, Yinghuo 1, lost contact before leaving the Earth orbit," it said, skirting any reference to India's first interplanetary expedition Mars Orbiter Mission (MOM) or Mangalyaan, whose success last year surprised China.
The Chinese Foreign Ministry hailed Mangalyaan success as "Asia's pride" and "landmark achievement in humankind's exploration of outer space."
Mangalyaan completed one year Mars orbit on September 24.
Earlier, China's official media including Global Times reported the September 28 successful launch of Astrosat, India's first space laboratory prominently.
"With the launch (of Astrosat), India has now joined the elite club of the US, European Union, Russia and Japan who have their own telescope in space," state-run Xinhua news agency said in its report.
In its editorial, the Global Times said, "the disturbing thing is that the Chinese public does not have a strong will to catch up with the US in space exploration."
"Perhaps it is time China sets up a special organisation for space exploration. Its tasks should not be limited to Earth-related things like launching satellites.
"It needs to eye the solar system, the galaxy and the universe. It should work on things that satisfy people's curiosity and widen humanities' horizons," it said.
"This is not a political need to brighten the image of China. It is a necessary step along with China's modernisation.
"China has been following the steps of the West in the past century. Now we need to set our sight for pioneering exploration, ready to explore virgin scientific territory, and dare to accept the risk of failure," it said.
Quelle: PTI
Raumfahrt
2364 Views
Created with page4