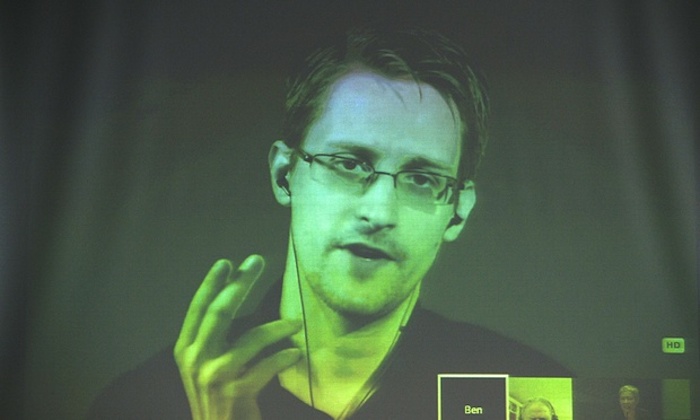 Former intelligence contractor Edward Snowden says encryption could get in the way of any communication with aliens. Photograph: Frederick Florin/AFP/Getty Images

Edward Snowden: we may never spot space aliens thanks to encryption
And extraterrestrials may never notice us, either, if our technology is sufficiently sophisticated, whistleblower tells Neil deGrasse Tyson
The US government whistleblower Edward Snowden believes encryption might make it difficult or even impossible to distinguish signals from alien species from cosmic background radiation.
On Friday night, Snowden appeared from Moscow on the astrophysicist and science communicator Neil deGrasse Tyson’s StarTalk podcast, via a robot video link called a “beam remote presence system”.
In 2013, after leaking documents on National Security Agency surveillance to media outlets including the Guardian, and under threat of US prosecution under the Espionage Act, Snowden sought asylum in Russia.
In a candid interview with Tyson, Snowden said he signed up for the US army following the terrorist attacks of 11 September 2001.
“It took a very long time for me to develop any kind of skepticism at all even to the most over-extended claims of the extension of programs or policies [by the US security services],” he said.
The conversation turned to the possibility that data encryption might be making it harder to intercept communications from aliens.
“If you look at encrypted communication, if they are properly encrypted, there is no real way to tell that they are encrypted,” Snowden said. “You can’t distinguish a properly encrypted communication from random behaviour.”
Therefore, Snowden continued, as human and alien societies get more sophisticated and move from “open communications” to encrypted communication, the signals being broadcast will quickly stop looking like recognisable signals.
“So if you have an an alien civilization trying to listen for other civilizations,” he said, “or our civilization trying to listen for aliens, there’s only one small period in the development of their society when all their communication will be sent via the most primitive and most unprotected means.”
After that, Snowden said, alien messages would be so encrypted that it would render them unrecognisable, “indistinguishable to us from cosmic microwave background radiation”. In that case, humanity would not even realise it had received such communications.
“Only,” Tyson replied jovially, “if they have the same security problems as us.”
Quelle: theguardian
UFO-Forschung
« Zum vorherigen Eintrag Zum nächsten Eintrag »
2661 Views
Created with page4