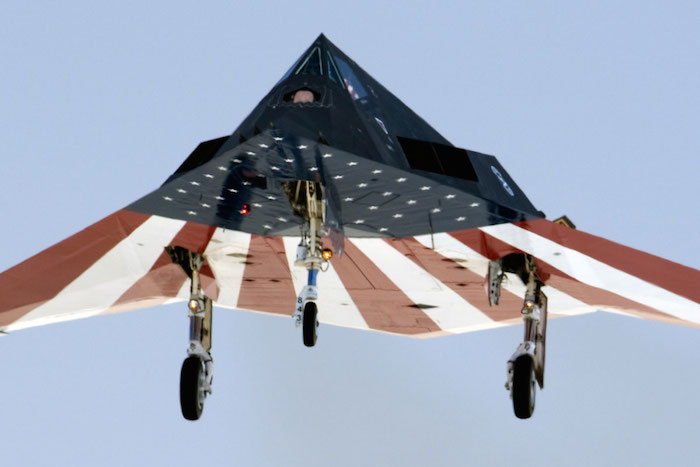 Two months shy of twenty-seven years since it was first flown, the F-117 Nighthawk was retired in ceremonies on 21 April 2008 at Holloman AFB, New Mexico, where it had been operated by the 49th Fighter Wing since 1992, and then on 22 April in Palmdale, California, for the people who had designed and built it at the then-Lockheed facilities there.

Surprise, Surprise
The US Air Force announced Thursday the existence of an operational stealth fighter aircraft, officially known as the F-117A. The single-seat, dual engine aircraft is built by Lockheed Corporation in California. The F-117A first flew in June 1981. The F-117A has been operational since October 1983, and is assigned to the 4450th Tactical Group at Nellis AFB, Nevada. The aircraft is based at the Tonopah Test Range Airfield in Nevada. A total of fifty-nine aircraft are being procured. Fifty-two have already been delivered to the Air Force and seven more are in production. With disclosure of the F-117A program, this mature system, which has enjoyed bipartisan Congressional support since its inception, can now be fully integrated into operational plans in support of worldwide defense commitments. This system adds to the deterrent strength of US military forces.  – US Air Force News Release, 10 November 1988
The Black Jet
The F-117 Nighthawk, the world’s first combat aircraft to fully exploit radar-evading stealth technology, was developed, tested, and flown operationally in complete secrecy. Even the official program name – Senior Trend – was a secret.
First flown in 1981 and operational in 1983, the futuristic-looking stealth fighters were based at the Tonopah Test Range in Nevada, an isolated facility roughly 250 miles north of Las Vegas.
The pilots, maintainers, and support staff of the cryptically designated 4450th Tactical Group would leave their homes at Nellis AFB in Las Vegas on Monday, fly via minimally marked 727 airliners to Tonopah, shift their body clocks to night operations for a couple of days, and then fly back to Nellis on Friday. After the F-117 program was publically acknowledged, the unit was redesignated the 37th Tactical Fighter Wing.
The futuristic-looking F-117, with its overall black paint scheme and faceted surfaces, would enter the national consciousness a little more than two years after the official announcement at the Pentagon. As Operation Desert Storm kicked off, TV news reports showed grainy video of targets in Baghdad, one of the most heavily defended cities on earth, being destroyed with a single 2,000-pound bomb being dropped precisely down an air ventilation shaft.
Two months shy of twenty-seven years since it was first flown, the F-117 was retired in ceremonies on 21 April 2008 at Holloman AFB, New Mexico, where it had been operated by the 49th Fighter Wing since 1992, and then on 22 April in Palmdale, California, for the people who had designed and built it at the then-Lockheed facilities there.
What follows is certainly not a complete history of what was called the Black Jet, but memories from a just some of the hundreds of people associated with the F-117 during its career.
.

During the first nine years of operations, the F-117 was based at Tonopah Test Range in Nevada. The fleet was relocated to Holloman AFB, New Mexico, in 1992. This aircraft (Air Force serial number 85-0816) was assigned to the 8th Fighter Squadron at Holloman. Known as the Black Sheep, the squadron's lineage dated back to World War II. 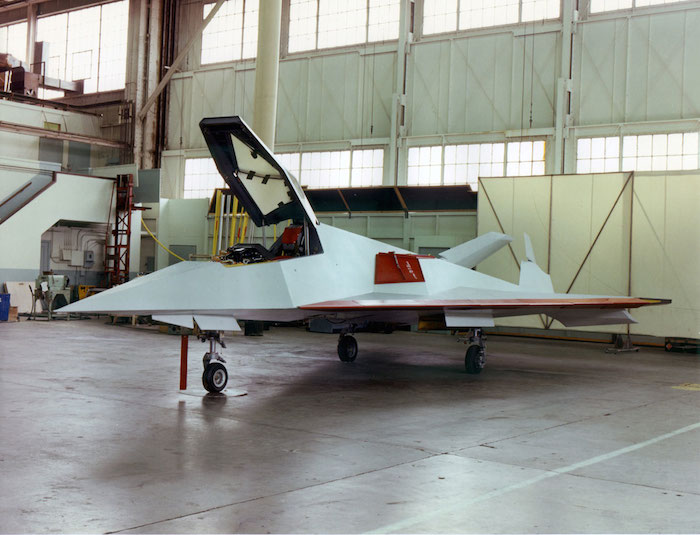 Have Blue was designed to provide a maneuverable fighter demonstrator with low observable characteristics. Two aircraft were built by the Lockheed Skunk Works using company research and development funding. Only twenty months after contract award, company test pilot Bill Park made the first flight of this aircraft on 1 December 1977. Eighty-eight flights were made on the two Hve Blue aircraft through 1979. Have Blue led directly to the F-117 Nighthawk stealth attack aircraft. 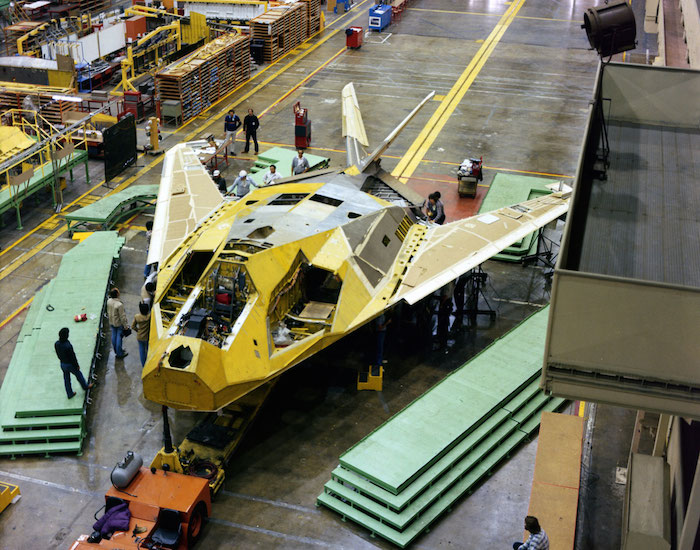 The F-117 Nighthawk stealth attack aircraft was developed in near-complete secrecy. This is the first F-117 (US Air Force serial number 79-10780) during final assembly at the Lockheed Skunk Works facility in Burbank, California, circa 1980. This aircraft was one of five pre-production aircraft that were flown to test performance, stability and control, and mission systems. The test aircraft were all airlifted to test site via C-5, departing Burbank in the middle of the night. Company test pilot Hal Farley made the F-117’s first flight in this aircraft on 18 June 1981, but the existence of the F-117 program was not publically revealed until 10 November 1988. This aircraft is now on display at Nellis AFB, Nevada. 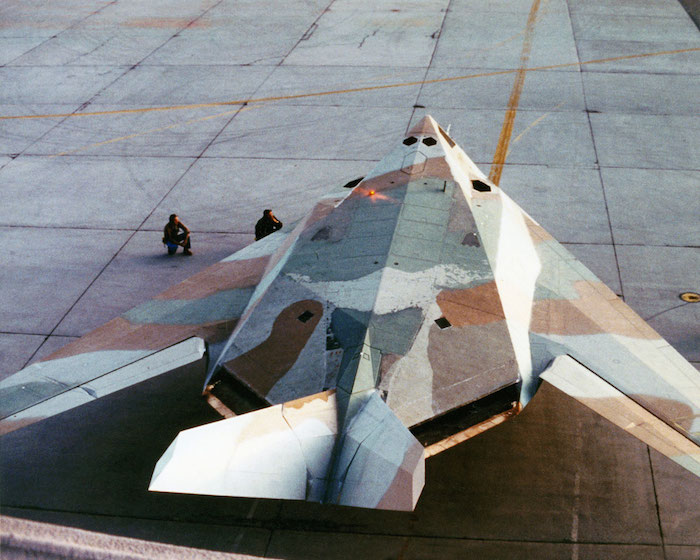 "I was so prepared for the first flight. I had flown the simulator, developed the flight control laws, and had been practicing by flying F-111s and F-16s. We made several taxi runs and had gotten to the point lifting the nose wheel off the ground and deploying the drag chute. I taxied out really early to take advantage of the smoother air at dawn. We didn’t fly with all the computers on during that first flight.  Overall, it was a simple flight with the gear down all the way. We did some mild maneuvers in pitch, roll, and yaw."  – Hal Farley, Lockheed test pilot, Bandit 117 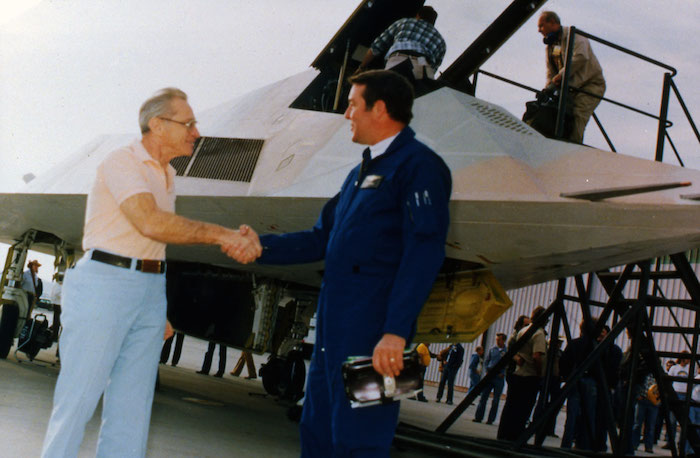 "There was a big party after the first flight, but I stayed behind. I wanted to write the flight test report while everything was still fresh in my mind. I wanted to be as detailed as possible. In the end, I didn’t even get to the party." – Hal Farley, Lockheed test pilot, Bandit 117
Here, Farley (left) shakes hands with Ben Rich, who led the F-117 development team at the then-Lockheed Skunk Works, after the first flight in 1981. 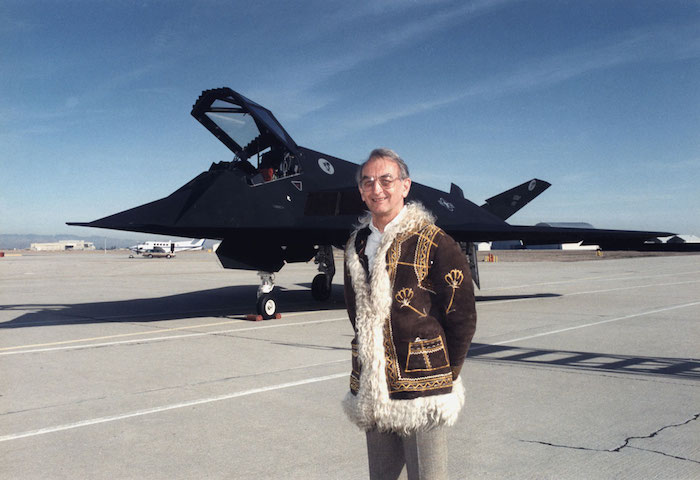 "I knew information about the F-117 had been released when I saw a photo of my airplane in a Brazilian newspaper with a caption in Portuguese." – Dr. Alan Brown, Lockheed F-117 Chief Technical Engineer 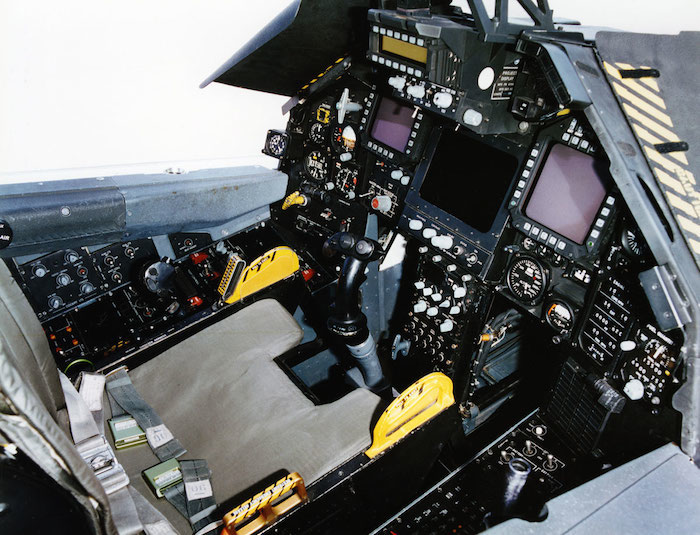 "The jet is easy to fly, but in other jets there is equipment that lets you know what is going on around you, like radar or radar warning. The situational awareness for the pilot just wasn’t there in the F-117. You went into the target alone and unafraid. The other aircraft in the strike package would always want to know where we were. We just didn’t talk on the radio during missions." – Lt. Col. Todd Flesch, Bandit 447 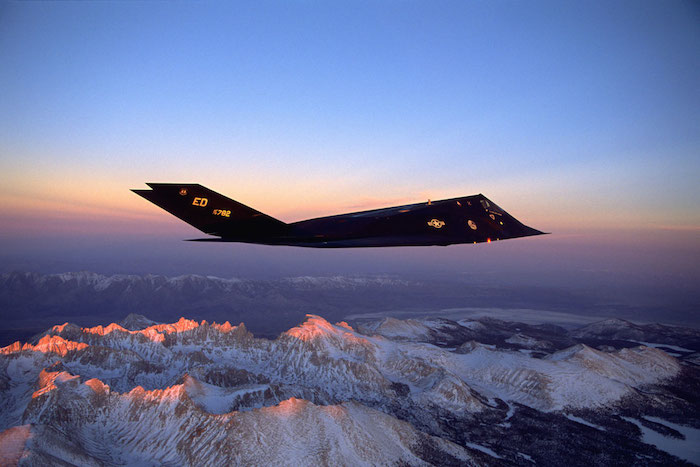 "I was the squadron commander of the 410th Flight Test Squadron – the F-117 flight test unit – from July 1997 to July 1999. We had Air Force test pilots and Air Force maintenance, but we also had Lockheed test pilots and Lockheed maintainers to help us. It was the most ideal test force I’ve ever been in." – Crash Jespers, Bandit 121
This image shows test pilot Jeffrey Knowles in one of the dedicated test F-117s over the Sierra Nevada Mountains in 2001. 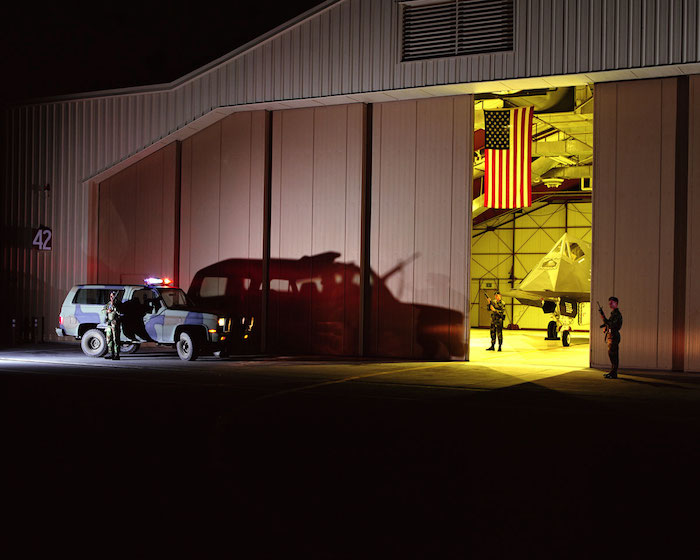 "We had seven aircraft when I started as a buck sergeant. Anybody who worked on the jet at Tonopah will remember their first launch. We ran completely blacked out operations. It was lights out, comm out. The first time those doors opened with nothing on and nothing out there on the outside. The old timers would tell you that it was ok to freeze. For a long time, we weren’t really sure it was flying. All we’d see was the lights go by." – SMSgt. Wendy Jones (ret.)
This image illustrates F-117 operations at Tonopah, Nevada, circa 1990. 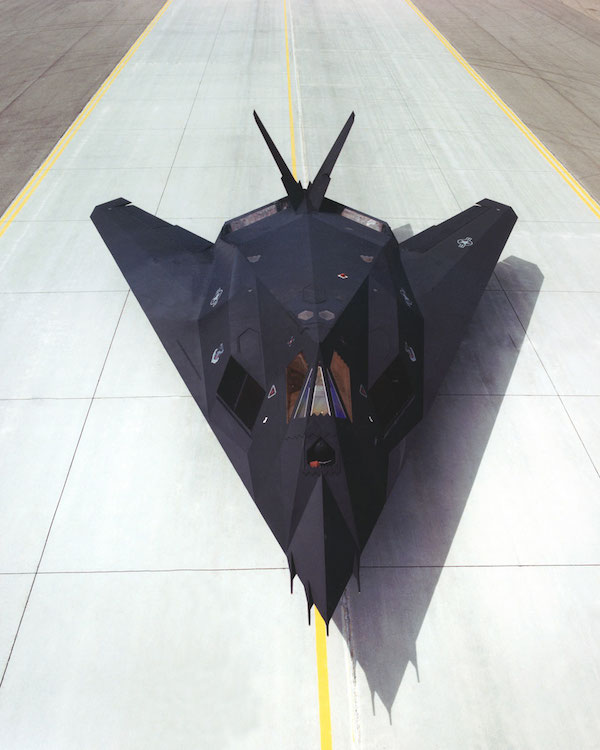 "The F-117 was based on 1970s technology and the American people got their money’s worth. The military, the contractors, and the civilians kept the program a secret for so long. The F-117 was a national treasure. Everybody knew someday we would use that fighter in a war and it would do a great job. And it did." – Maj. Gen. Greg Feest, Bandit 261 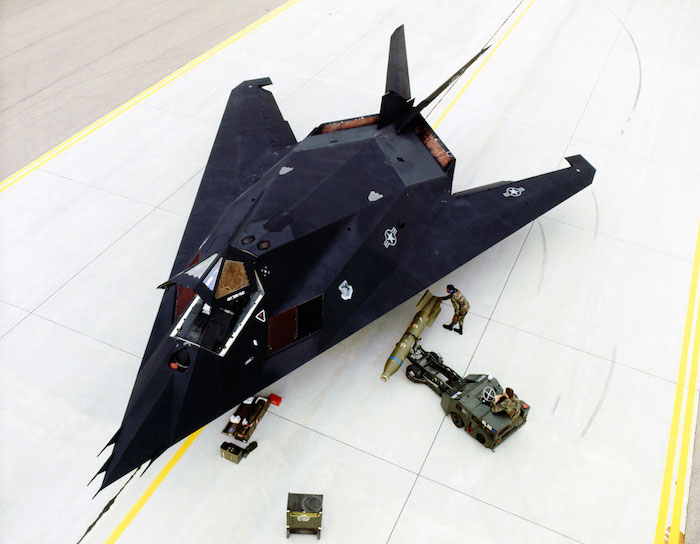 "Over its career, the F-117 has been deployed to the desert, to Europe, and to the Pacific. The jet has done its job every time. The bombs go right where they are supposed to and you go home."  – Lt. Col. Todd Flesch, Bandit 447 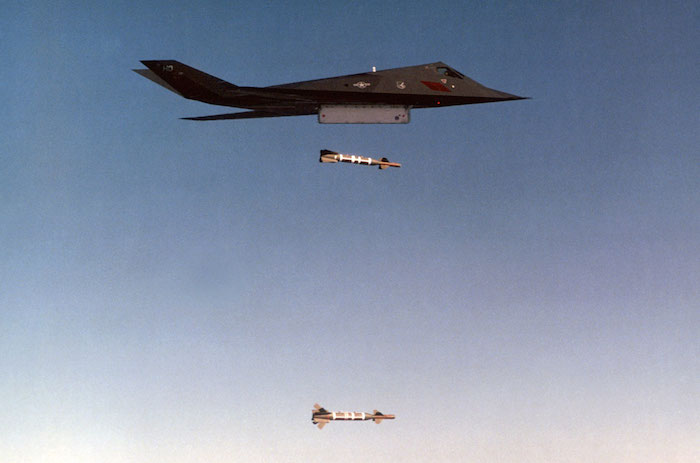 "The GBU-27s we used in Desert Storm were dropped singly. With the GBU-10 and Mk. 84, you could drop simultaneously. They would follow each other in, and you could see both explosions." – Claus Klause, Bandit 283 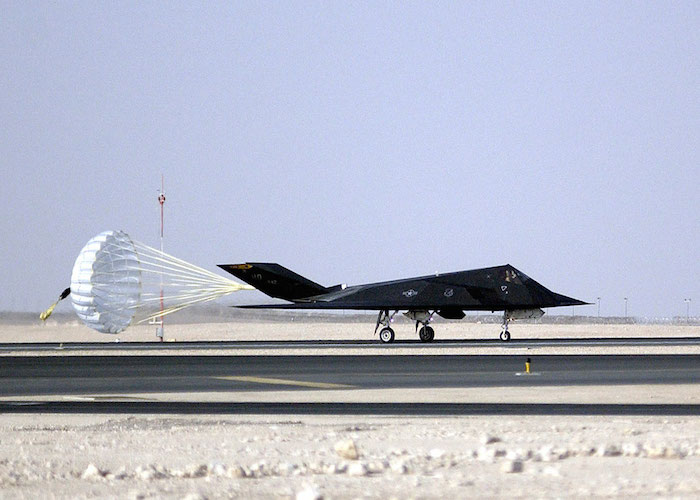 An F-117 Nighthawk pilot from the 8th Expeditionary Fighter Squadron lands at a forward deployed airfield after completing a mission in support of Operation Iraqi Freedom on 20 March 2003.  DoD  U.S. Air Force. 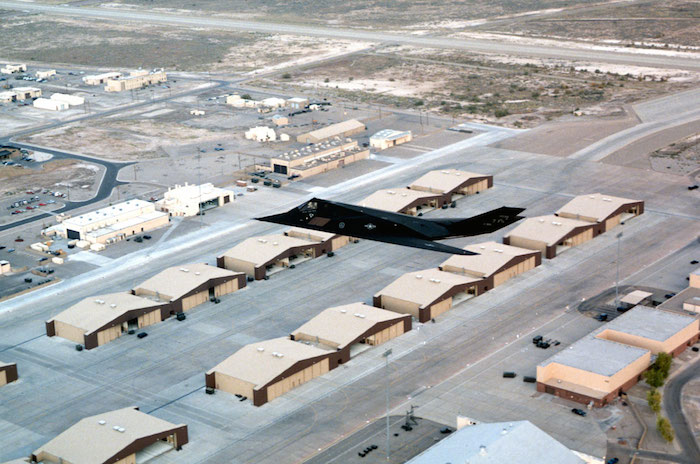 A 7th Fighter Squadron pilot flies his F-117 over the hangars at Holloman AFB, New Mexico in 1995. Known as the Screamin' Demons, the 7th FS lineage dated back to World War II. 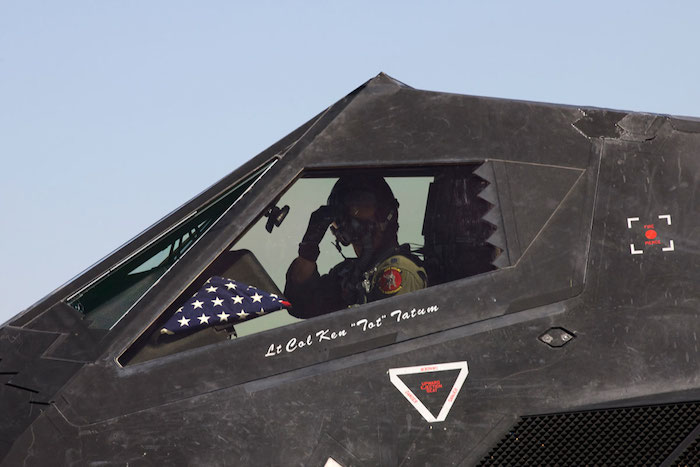 "Last year [2007], when things in Korea got hectic, the US Forces Korea commander said, ‘Get those black things’ up to the front. We made the F-117’s last deployment and took eighteen jets to South Korea. We knew we were influential. Everybody knows what the jet can do." – Lt. Col. Ken Tatum, Bandit 527 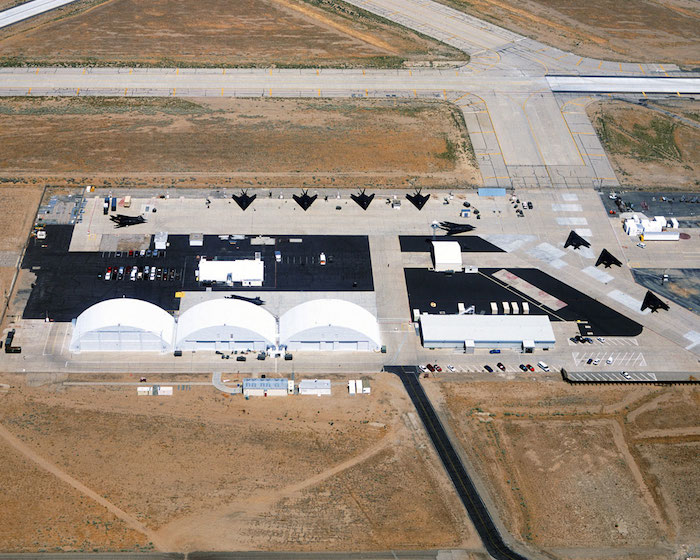 Ten Nighthawks can be seen at Site 7, the Lockheed Martin F-117 Depot at Plant 42 in Palmdale, California, on 21 June 2001. The aircraft were there in preparation for the 20th Anniversary Celebration/Flyover at nearby Edwards AFB a few days later. 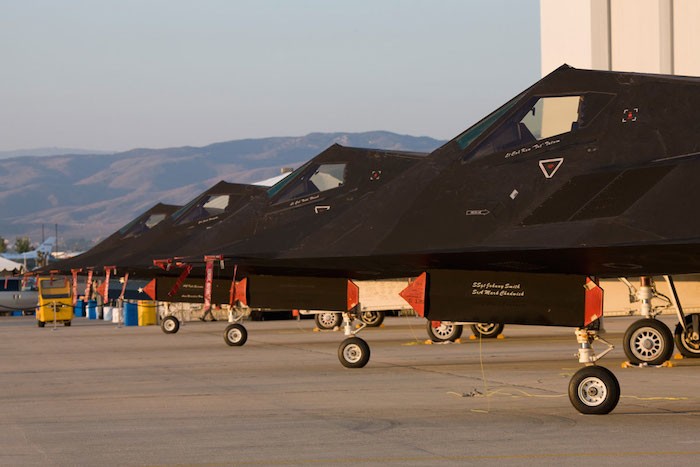 Two months shy of twenty-seven years since it was first flown, the F-117 was retired in ceremonies on 22 April 2008 in Palmdale, California, for the people who had designed and built it at the then-Lockheed facilities there. Here, the last four jets are lined up on the ramp prior to the final takeoff. 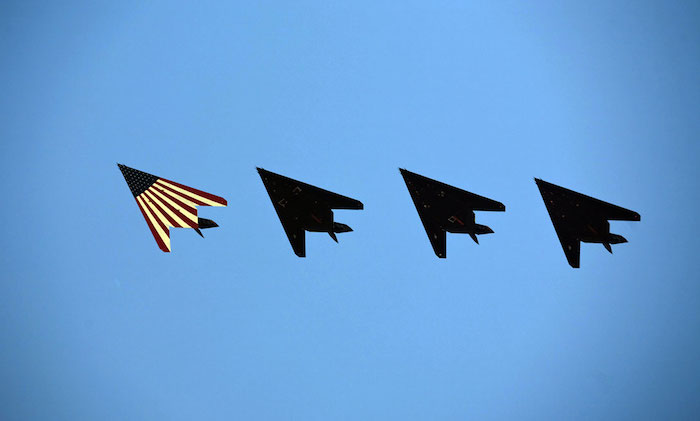 "I think there is going to be a fight between the four of us as to who will be the very last F-117 pilot to land when we take the jets to Tonopah for storage. I’m thinking I’ll flame out an engine if I have to. Making that last landing will be quite a distinction. – Lt. Col. Todd Flesch, Bandit 447, prior to the last F-117 flight on 22 April 2008
Here, the final four F-117s form up after takeoff on the last flight. 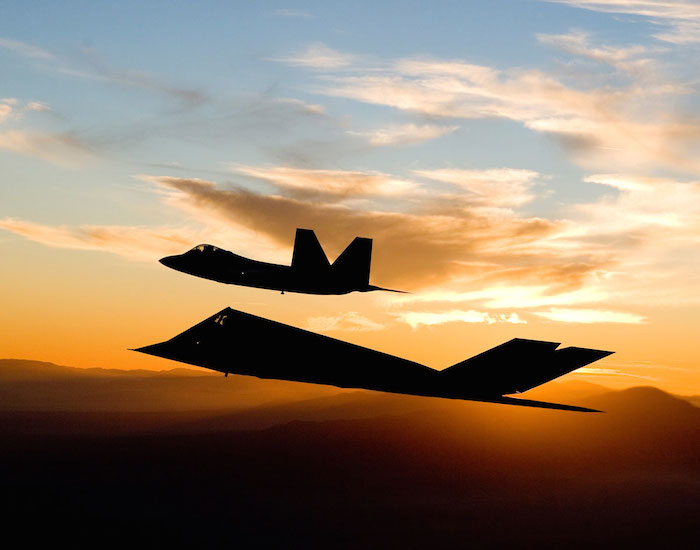