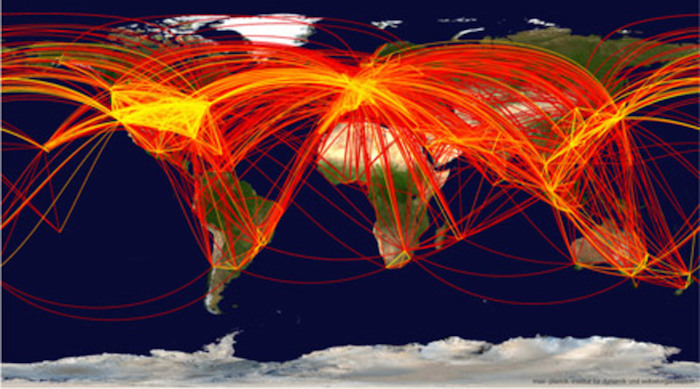 The dozens of Iridium satellites that orbit the Earth are notable for two things: the flashes of light they emit when the sun strikes them just so, and the $1.5-billion (U.S.) bankruptcy that followed their launch in the late 1990s.
The former Motorola-backed company, now known as Iridium Communications Inc., hopes the 66 satellites it will begin launching in December will have a greater legacy: allowing around-the-globe surveillance of the world’s airline traffic.
The satellites, which will orbit the Earth 780 kilometres high, will carry devices that broadcast aircraft speed and locations to air-traffic controllers on the ground, allowing planes to save fuel by flying closer together and on more precise routes.
The system will be run by Aireon LLC, a joint venture of Virginia-based Iridium and Nav Canada, the domestic air-traffic controller that will be a 51-per-cent owner with an investment of $150-million.
“One of the big motivating factors for us to get involved in Aireon was the savings that this new system will bring to the airlines,” said John Crichton, chief executive officer of Nav Canada, which is a private non-profit company governed by a board of directors that includes representatives of the airlines, aviation industry, government and unions.
Mr. Crichton said he is confident Aireon will be profitable, but that target is secondary to the savings it will mean for airlines.
“Even if all Aireon did was break even, we would consider it a huge success because on the North Atlantic alone, the fuel savings from a conservative low end of $125-million a year to a more realistic $200-million-plus more than justifies the investment,” he said.
Aireon, whose minority owners are the Irish Aviation Authority, Naviair of Denmark and ENAV of Italy, has reached early agreements with air-traffic controllers in the United States, Britain, South Africa, Singapore and New Zealand, and expects to be up and running within three years.
The system is designed as an improvement to the current methods air-traffic controllers use to monitor and guide airplanes: radar and, to a lesser extent, a system that transmits automatic signals from an aircraft to controllers by way of a land-based receiver.
Both require ground installations and neither extend more than 240 kilometres into the ocean. This means 90 per cent of the world is a blind spot for air-traffic controllers, who must rely on periodic voice communication with planes to determine their locations. “You can imagine it as each aircraft flying with a huge bubble of airspace around them, and the more infrequent that position report, the larger the bubble is around that aircraft,” said Cyriel Kronenburg, vice-president of sales at Aireon. “It’s a very safe system, but it’s very inefficient because it generates a large block of airspace where the controller can’t do anything unless the aircraft reports himself clear of that block again.”
This “bubble” between aircraft is about 100 nautical miles. Satellite communications would help reduce this to as little as five miles, allowing more planes to fly within the jet stream, or change altitude to avoid fuel-sapping turbulence, Mr. Kronenburg said.
Air Canada spokesman Peter Fitzpatrick said the airline welcomes the new system because it will allow its planes to fly the most efficient routes, burn less fuel and reduce greenhouse-gas emissions. “It will also provide an added level of safety by extending the reach of aircraft surveillance into remote areas not currently covered by conventional radar,” Mr. Fitzpatrick said.
Many airlines have already equipped their planes with the equipment that can communicate with the satellites and will not face additional costs.
The new satellites, which will replace Iridium’s aging fleet, will also allow Iridium to update its satellite phone business, used by the military, the marine industry and people in remote areas, such as Australian ranchers.
Before going bankrupt in 1999, the company spent $5-billion launching the satellites, only to find its phone service was obsolete and overpriced even before it was working properly. Iridium could not compete with the far cheaper cellular offerings that were beginning to catch on, and its 1999 bankruptcy was among the biggest technology company failures at the time. Investors brought the company out of bankruptcy for $25-million, and the company emerged in its present form.
“They tried to come out with a service, just a simple big phone that worked outdoors, with a big cost structure using lots and lots of debt. There’s just no way that could have operated,” said Matthew Desch, Iridium’s CEO since 2006 and a former Nortel Networks Corp. executive. In 2014, Iridium posted a profit of $75-million on $400-million in sales with 660,000 subscribers. It is spending $3-billion launching the new satellites in a gamble that is hedged with partnerships such as the one with Nav Canada, said Mr. Desch, an Ohio native and a computer engineer who describes himself as a space and aviation nut who got his pilot’s licence as a teenager.
When the first two satellites are rocketed into space at a Russian military base in December, he’ll be there. The other satellites, which are about the size of a Cessna airplane, are scheduled to be launched beginning in April from California’s Vandenberg Air Force Base by Elon Musk’s Space Exploration Technologies Corp., a company that made headlines after one of its rockets exploded shortly after launching on June 28.
Mr. Desch, 57, said he is confident the launch will be on schedule and successful.
“You’re disappointed any time there is a failure, but launching is a difficult thing to do,” he said. “They have been extremely successful. In some ways, I’m glad it happened now … because as one of my space guys said, you always want to be on the launch after a failure because everyone is really paying a lot of attention.”
Quelle: The Globe and Mail
Raumfahrt
2277 Views
Created with page4