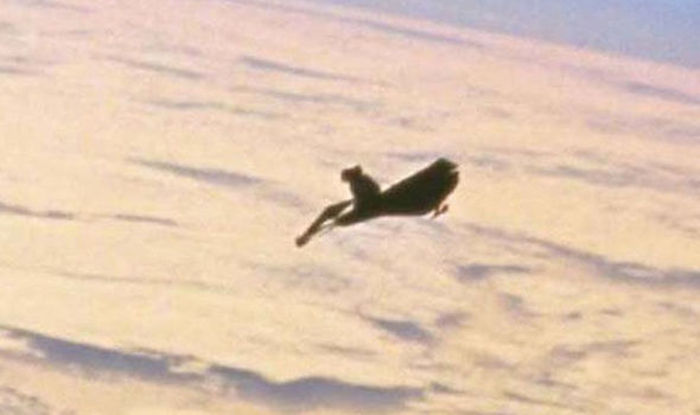 The legendary "Black Knight satellite" appears to have been proved as Nasa thermal blanket
The narrator even apologised for his amateur presenting style and asked viewers to bear with him.
But after an 11-minute DIY filming attempt, YouTube user NUA appears to have successfully debunked 1998 photographs of the so-called 'Black Knight satellite'.
Over the past 24 hours Express.co.uk has revealed new video and photographic footage from UFO conspiracists who claimed they had further proof of the mysterious alien satellite.
Alien researchers have been calling the myth "one of the most convincing pieces of evidence for the existence of intelligent extraterrestrial life" for the past 17 years, while some claim it has orbited Earth for at least 13,000 years.
. 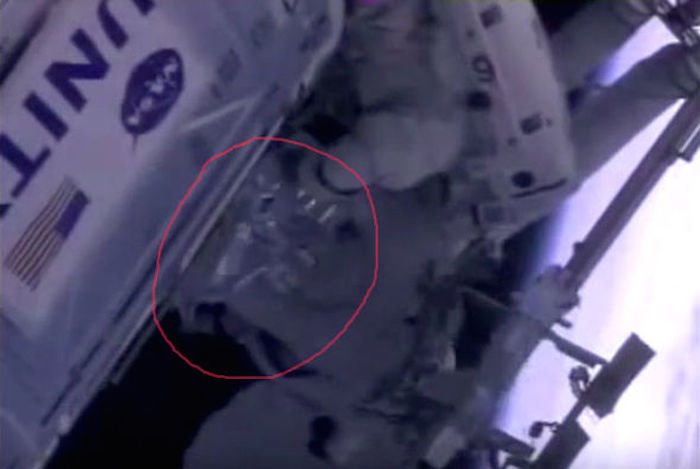 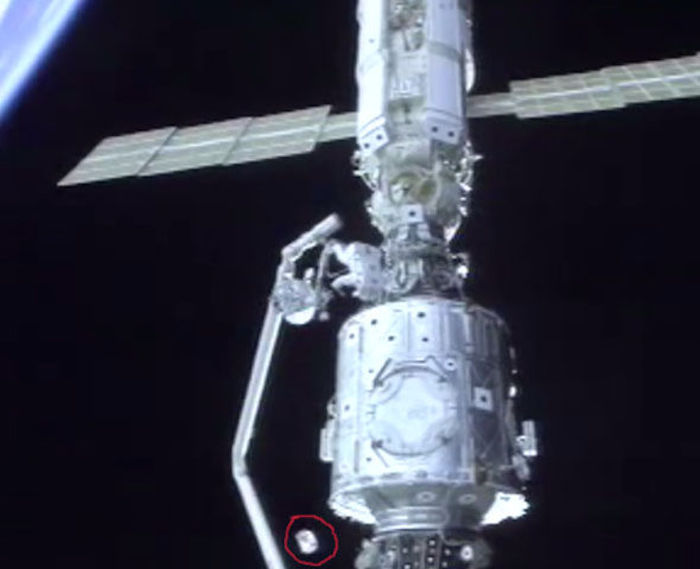 "There she goes" - dropped thermal blanket floats from ISS
But NUA's video - titled "Black Knight Satellite UFO Documentary - Truth Exposed 2015 - (Debunked)" - claims to conclusively prove the 'Black Knight', as photographed in 1998 NASA images, was nothing more than a satellite thermal blanket lost by the crew of the Endeavor space shuttle as they worked on the developing the International Space Station (ISS).
In his video, NUA compared NASA video of the Endeavor mission which shows a thermal blanket on the ISS.
The same blanket is then seen being dropped by the crew as it tubules away into space.
He highlights the blanket as being exactly the same shape as the 'Black Knight' in the 1998 pictures seized on by conspiracists and explains that the object only appeared to change shape because it was turning as it fell away.
After releasing the pictures in 1998, NASA said it was a thermal blanket, but it did not stop a wave of conspiracists branding it a huge cover up.
The legend of the alien satellite seems to have then been retrospectively dated back to 1899 when Nicola Tesla announced he was picking up radio waves coming from space, prompting people to suggest something alien was out there.
. 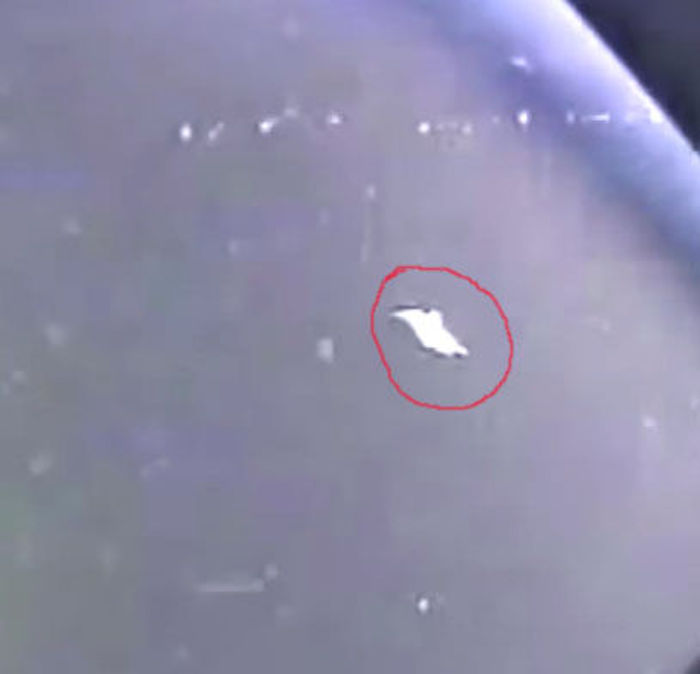 ...and gets further and further away

NUA has forensically compared shape of blanket to Black Knight and concluded they are the same
.
It is not a UFO. It is identified. It is a thermal blanket. It is just an unfortunate case of misidentification.
YouTube UFO researcher NUA
Experiments in 1928 in Oslo, Norway, picked up the same signals.
In 1954, US state newspapers carried quotes from Donald Keyhoe, a retired naval aviation major and UFO researcher, claiming the US Air Force had detected two satellites orbiting Earth, despite none yet being launched from our planet.
Time then ran a 1960 piece, following the launch of satellites from Earth, stating that the US Navy detected a dark object, possibly a Soviet spy satellite, with a highly irregular orbit.
The myth developed in 1963 when NASA astronaut Gordon Cooper was reported as saying he had seen the 'Black Knight Satellite' while in space, but there was a media blackout upon his return and the US space agency allegedly put it down to cosmic hallucinations.
It has been reported that a decade later in 1973, a researcher from Scotland, Duncan Lunan, looked back at the Norwegian scientists' data from 1928, before claiming the "messages" suggested the 'Black Knight' was sent by aliens from Epsilon Boötis, as a welcome message to Earth 12,600 years ago.
Many sceptics claim the legend was retrospectively created after the 1998 pictures emerged, with the preceding odd events weaved into the story to make it more convincing.
. 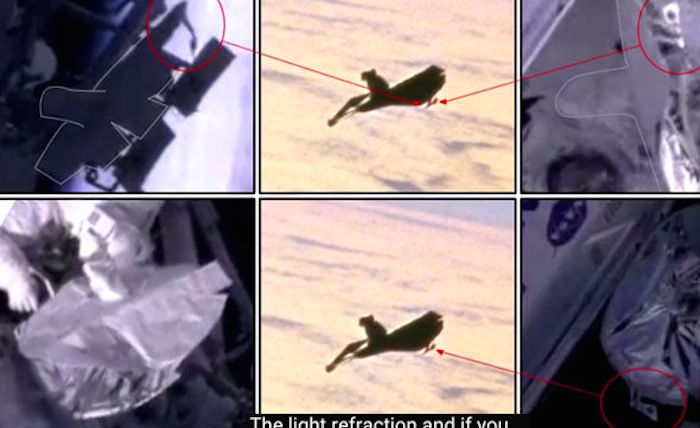 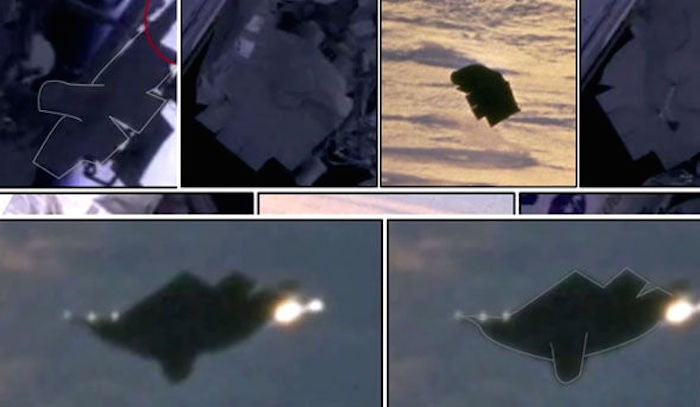 Do you agree NUA has solved the Black Knight mystery?
.
The noises from 1899 and 1928 remain a mystery, but the possible causes do not so far include an alien satellite, according to scientists.
They insist research shows that in 1954 Mr Keyhoe had been promoting a UFO book and the articles had been written in a tongue-in-cheek fashion by the papers.
A follow-up, but less widely read, article in Time also confirmed that the strange satellite had in fact been the remains of an Air Force Discoverer satellite that had gone astray, they found.
There are reports that Mr Cooper, although maintaining he saw a number of UFOs in space, never claimed to have seen the 'Black Knight satellite' on that mission or at all.
Mr Lunan is also later reported to have denied suggesting any alien satellite had its origins 12,600 years ago and that his conclusion that the noises were a star map were from unscientific methods.
Despite NUA's video, many UFO researchers refuse to believe the fabled 'Black Knight satellite' could be just a thermal blanket, insisting, it is a craft of solid construction.
One 'Black Knight' believer posted online about the thermal blanket explanation: "Classic debunking (rubbish). The things these nutters will come up with just so someone will listen to them."
Quelle: EXPRESS
.
Video davon hier: https://www.youtube.com/watch?v=2VA2M10b6Tk#t=663
UFO-Forschung
2419 Views
Created with page4