The Russian Federal Space Agency Roscosmos plans to carry out six launches of a Proton-M launch vehicle within the next four months, one of them for the Defense Ministry, a Russian space rocket industry source told Interfax-AVN on Monday.
"Roscosmos has already announced a Proton-M launch carrying the British communications satellite Inmarsat 5 F3, scheduled for August 28. In addition, the launch of a Proton-M carrying an Express-AM8 communications satellite is planned for September 14, and the Turkish spacecraft Turksat 4B is to be put into orbit on October 6. In addition, another launch in the Defense Ministry's interests will take place in October," the source said.
Roscosmos plans also to launch two Proton vehicles in November to put the Eutelsat 9B and Express-AMU-1 telecommunications satellites into orbit, he said.
The Proton launches were suspended following the crash of such a vehicle carrying a Mexican telecommunications satellite in May 2015.
The Khrunichev space research and production center had reported earlier that the launches of Proton rockets would be resumed following the May crash on August 28 by sending the British telecommunications satellite Inmarsat 5 F3 into space.
Proton missions were suspended following the failed launch of a Mexican communications satellite in May 2015. A Proton-M rocket with a Briz-M upper stage and the MexSat-1 Mexican communication satellite onboard blasted off from Baikonur on May 16. The engine of the rocket's upper stage shut down during the 498th second of the flight, reportedly above the Transbaikal territory at an altitude of about 161 kilometers, one minute before the payload was to separate from the launch vehicle. "The third stage, the upper stage, and the spacecraft burned up in the atmosphere," Roscosmos said.
A government commission investigating the crash concluded that the failed Proton-M mission was due to the failure of the 3rd stage's thruster because of increased vibration caused by the misbalance of the turbo-pump unit's rotor, whose performance was affected by high temperatures and an imperfect balance system. The commission also said in its conclusions that the crash was caused by the design factor.
Quelle: Interfax
---
ILS CONCLUDES THE REVIEW OF THE CENTENARIO PROTON LAUNCH FAILURE INVESTIGATION
The International Launch Services (ILS) Failure Review Oversight Board (FROB) concluded its work, concurring with the most probable cause and the associated corrective action plan which were identified by the Russian Interagency Commission (IAC) as a result of the May 16 Proton launch vehicle failure carrying the Centenario spacecraft.
The members of the FROB reviewed the findings and conclusions from the IAC along with results from testing and investigations that the IAC directed to be performed by Khrunichev and their subsidiaries.
Based on the data presented by KhSC, the FROB agreed that the most probable cause of the failure was a result of a higher than expected vibration environment most likely caused by the combination of a marginal mechanical joint used to mount the Stage III steering engine turbo pump and a steering engine turbopump rotor material that had marginal strength under maximum operating environments. This led to a premature shutdown of the turbopump and loss of Stage III control authority and subsequently to the failure of the mission during 3rd stage operation approximately 497 seconds after liftoff.
“The participating customers, insurance underwriters and independent subject matter experts are to be commended for their valuable contributions during the extensive FROB review process. We thank our customers for their support as we prepare for the safe return to flight of ILS Proton,” said ILS Vice President and Chief Technical Officer, John Palmé.
Quelle: ILS
-
Update: 28.08.2015
. 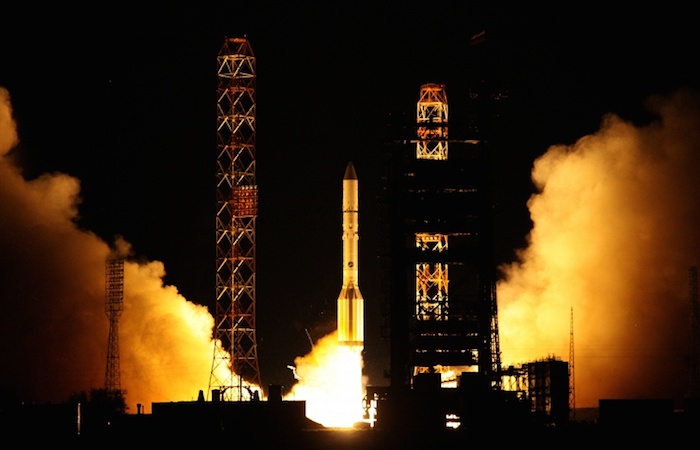 Proton-M rocket to be launched from Baikonur first time after May crash
.
The carrier rocket will orbit the British telecommunications satellite Inmarsat-5F3
Russia’s Proton-M rocket will be launched on Friday for the first time after the May crash from the Baikonur cosmodrome in Kazakhstan. The carrier rocket will orbit the British telecommunications satellite Inmarsat-5F3, the press service of the Khrunichev State Research and Production Space Centre, which makes the Protons, told TASS.
"The launch is scheduled for 14:44 pm, Moscow time on August 28," the company said.
The separation of the upper stage - the satellite with the Briz-M booster - is to take place nine minutes after the launch, at 14:53 pm, Moscow time.
After that the satellite will be placed into orbit by means of five burns of the Briz-M’s sustainer engine and is expected to separate from the booster in some 12 hours after the blast-off - at 02:44 am, Moscow time on August 29.
The UK satellite had been planned to be orbited in late May, but the launch was postponed due to the Proton-M rocket accident, which took place on May 16 - exactly one year after a similar incident. A Mexican telecommunications satellite was lost in the abortive launch. The Russian Federal Space Agency (Roscosmos) arrived at the conclusion that the accident was caused by a design defect that had led to a Proton fall back in 1988.
Inmarsat-5F3 is a fifth-generation telecommunications satellite of the international satellite operator Inmarsat. It was manufactured by the American company Boeing. The satellite will join the Global Express new global system of mobile satellite services, which will consist of four satellites and six Inmarsat ground stations. The company will invest $1.2 billion in its infrastructure and space segment.
To date, two satellites of the new system have been launched. The first - Inmarsat-5F1 - was launched in late 2013. Its ··coverage area includes Europe, the Middle East, Africa and Asia. The Inmarsat-5F2 satellite is to provide telecommunications services in North America and South America and in the Atlantic. The third satellite will provide communications services to the Pacific region.
Quelle: TASS
... 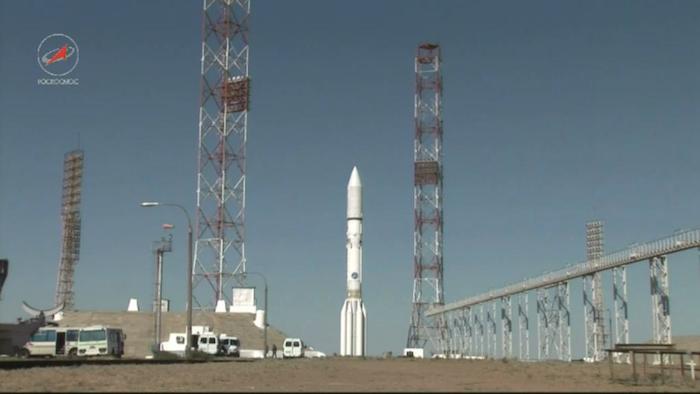 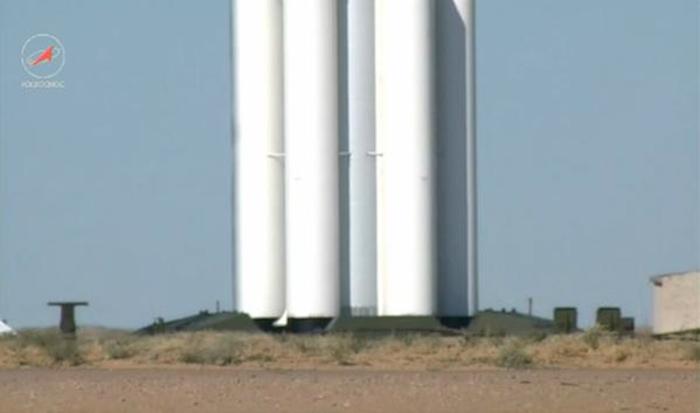 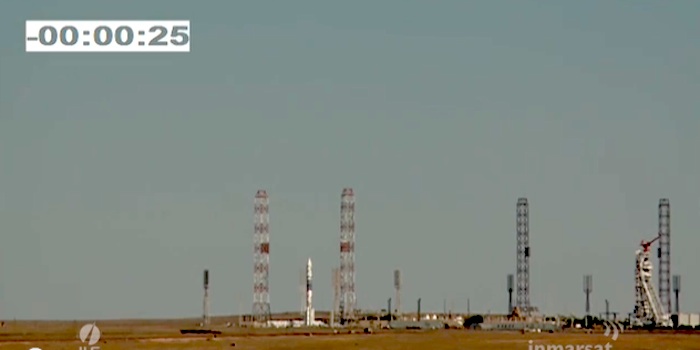 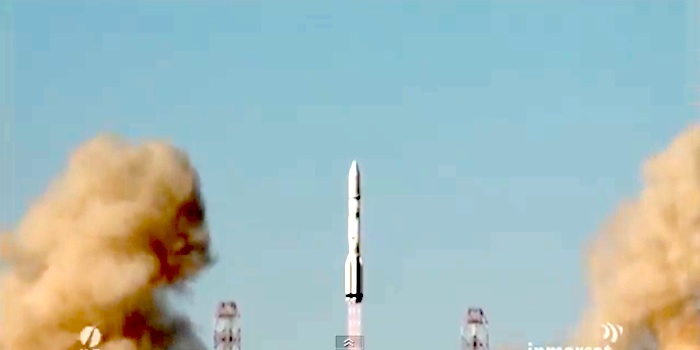 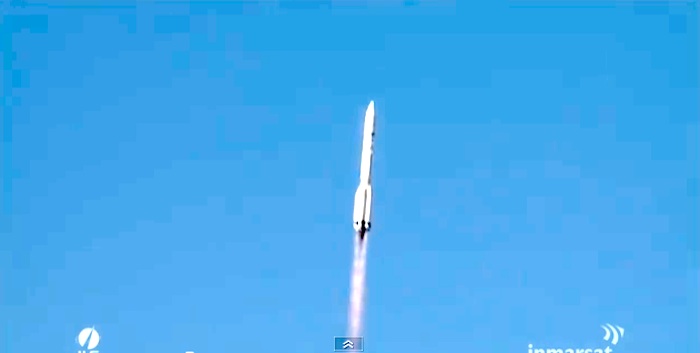 Quelle: ILS
-
Update: 29.08.2015
.
ILS PROTON SUCCESSFULLY LAUNCHES INMARSAT-5 F3 SATELLITE
The Final Global Xpress®Satellite Launch in 3-constellation Series
BAIKONUR COSMODROME, Kazakhstan, August 29, 2015 – An International Launch Services (ILS) Proton Breeze M successfully placed the Inmarsat-5 F3 (I-5 F3) satellite into a super-synchronous transfer orbit (SSTO) today. The spacecraft was launched for Inmarsat, the leading provider of global mobile satellite communications services. I-5 F3 is the third of Inmarsat’s next-generation Global Xpress satellites, which launched on an ILS Proton. This marks the third Proton launch of the year and the 5th SSTO mission for ILS, a leader in providing launch services to the global commercial satellite industry.
The Proton launch vehicle, carrying the I-5 F3 satellite, lifted off from Pad 39 at the Baikonur Cosmodrome yesterday at 17:44 local time (12:44, London time, 11:44 GMT and 07:44 ET). The SSTO mission utilized a 5-burn Breeze M mission design to advance the orbital unit first to a circular parking orbit, then to an intermediate orbit, followed by a transfer orbit, and finally to a 65,000 km-apogee super-synchronous transfer orbit. After a 15-hour, 31-minute mission, the satellite was placed into the target orbit by the Proton launcher. SSTO missions provide increased heavy-lift performance over GTO mission designs, allowing our customers the capability to maximize spacecraft operational lifetime.
The satellite was manufactured by Boeing Satellite Systems International and built on the reliable 702HP platform. Weighing over 6 metric tons at lift-off, the I-5 F3 satellite has 89 Ka-band fixed beams and 6 steerable ones. I-5 F3 is designed to generate approximately 15 kilowatts of power at the start of service and approximately 13.8 kilowatts at the end of its 15-year design life. To generate such high power, the spacecraft's two solar wings employ five panels of ultra-triple-junction solar cells.
Global Xpress will be the first globally available high-speed mobile broadband network, delivered through a single provider.  It will offer the unique combination of global coverage, consistent high-speed performance, and the network reliability for which Inmarsat is renowned. GX services will be deployed to serve the advanced mobility needs of Inmarsat’s existing customers on land, at sea and in the air, will diversify Inmarsat’s business into existing adjacent government and energy markets, and position Inmarsat in the vanguard of new, high-growth military-Ka,  aviation passenger, maritime and other connectivity markets.
ILS President Phil Slack stated, “It is always exciting to launch a satellite for one of our customers and to play a key role in the deployment of its services. As the launch provider for Inmarsat’s first three Global Xpress satellites, it has been extremely rewarding to know that we have helped to enable Inmarsat’s innovative technology.  Inmarsat’s Global Xpress network delivers broadband connectivity to the remotest regions of the world, as well as critical worldwide communications services on land, at sea or in the air. The collective teams at Inmarsat, ILS, Khrunichev and Boeing are to be commended for their dedication to the successful launch of Inmarsat-5 F3.”
“The launch of the third Global Xpress satellite is a pivotal moment in Inmarsat’s history. Global Xpress will delivery broadband speeds an order of magnitude faster than our 4th generation (I-4) constellation, allowing us to offer our current customers new high value services and solutions and to grow our business activities into exciting new markets. This is truly a new era in mobile satellite communications,” said Rupert Pearce, CEO, Inmarsat. “We sincerely thank our dedicated staff and our partners at Inmarsat, Boeing, ILS and Khrunichev for ensuring mission success.”
The I-5 F3 launch marked the 405th launch for Proton since its maiden flight in 1965 and the 90th ILS Proton Launch overall. This was also the 19th Boeing-built satellite launched on an ILS Proton and the 5th Inmarsat satellite launched on Proton overall. The Proton M Breeze M vehicle is developed and built by Khrunichev Research and Production Space Center of Moscow, Russia’s premier space industry manufacturer and majority shareholder in ILS.
Quelle: ILS
Raumfahrt
2114 Views
Created with page4