Stars in Our Galaxy Move Far From Home
When it comes to our galaxy, home is where the star is.
Scientists with the Sloan Digital Sky Survey (SDSS) have created a new map of the Milky Way and determined that 30 percent of stars have dramatically changed their orbits. This discovery, published in yesterday's issue of The Astrophysical Journal, brings a new understanding of how stars are formed, and how they travel throughout our galaxy.
. 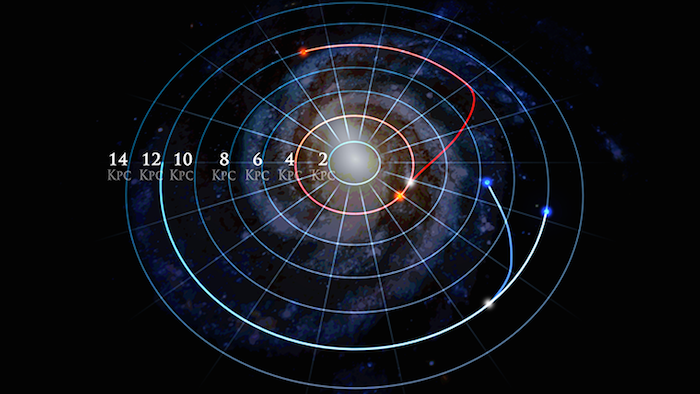 A single frame from an animation shows how stellar orbits in the Milky Way can change. + MORE +
Credit: Dana Berry / SkyWorks Digital, Inc.; SDSS collaboration
-
"In our modern world, many people move far away from their birthplaces, sometimes halfway around the world," says Michael Hayden of New Mexico State University (NMSU), the lead author of the new study. "Now we're finding the same is true of stars in our galaxy — about 30 percent of the stars in our Galaxy have traveled a long way from the orbits in which they were born."
To build a map of the Milky Way, the scientists used the SDSS Apache Point Observatory Galactic Evolution Explorer (APOGEE) spectrograph to observe 100,000 stars during a 4-year campaign.
The key to creating and interpreting this map is measuring the elements in the atmosphere of each star. "From the chemical composition of a star, we can learn its ancestry and life history," Hayden says.
The chemical information comes from spectra, which are detailed measurements of how much light the star gives off at different wavelengths. Spectra show prominent lines that correspond to elements and molecules present. Reading the spectral lines of a star can tell astronomers what the star is made of.
"Stellar spectra show us that the chemical makeup of our galaxy is constantly changing," says Jon Holtzman, an astronomer at NMSU who was involved in the study. "Stars create heavier elements in their cores, and when the stars die, those heavier elements go back into the gas from which the next stars form."
As a result of this process of "chemical enrichment," each generation of stars has a higher percentage of heavier elements than the previous generation did. In some regions of the Galaxy, star formation has proceeded more vigorously than in other regions -- and in these more vigorous regions, more generations of stars have formed. Thus, the average amount of heavier elements in stars varies across different parts of the Galaxy. Astronomers can use the amount of heavy elements in a star to determine what part of the Galaxy the star was born in.
Hayden and colleagues used APOGEE data to map the relative amounts of 15 separate elements, including carbon, silicon, and iron, for stars all over the Galaxy.
What they found surprised them — up to 30 percent of stars had compositions indicating that they were formed in parts of the Galaxy far from their current positions.
"While on average the stars in the outer disk of the Milky Way have less heavy element enrichment, there is a fraction of stars in the outer disk that have heavier element abundances that are more typical of stars in the inner disk," says Jo Bovy of the Institute for Advanced Study and the University of Toronto, another key member of the research team.
When the team looked at the pattern of element abundances in detail, they found that much of the data could be explained by a model in which stars migrate into new orbits around the Galactic Center, moving nearer or farther with time. These random in-and-out motions are referred to as "migration," and are likely caused by irregularities in the Galactic disk, such as the Milky Way's famous spiral arms. Evidence of stellar migration had previously been seen in stars near the Sun, but the new study is the first clear evidence that migration occurs for stars throughout the Galaxy.
Future studies by astronomers using data from SDSS promise even more new discoveries. "These latest results take advantage of only a small fraction of the available APOGEE data," says Steven Majewski, the Principal Investigator of APOGEE. "Once we unlock the full information content of APOGEE, we will understand the chemistry and shape of our galaxy much more clearly."
About SDSS-III
Funding for SDSS-III has been provided by the Alfred P. Sloan Foundation, the Participating Institutions, the National Science Foundation, and the U.S. Department of Energy Office of Science.
SDSS-III is managed by the Astrophysical Research Consortium for the Participating Institutions of the SDSS-III Collaboration including the University of Arizona, the Brazilian Participation Group, Brookhaven National Laboratory, Carnegie Mellon University, University of Florida, the French Participation Group, the German Participation Group, Harvard University, the Instituto de Astrofisica de Canarias, the Michigan State/Notre Dame/JINA Participation Group, Johns Hopkins University, Lawrence Berkeley National Laboratory, Max Planck Institute for Astrophysics, Max Planck Institute for Extraterrestrial Physics, New Mexico State University, New York University, The Ohio State University, Pennsylvania State University, University of Portsmouth, Princeton University, the Spanish Participation Group, University of Tokyo, University of Utah, Vanderbilt University, University of Virginia, University of Washington, and Yale University.
Quelle: SDSS-III
Astronomie
« Zum vorherigen Eintrag Zum nächsten Eintrag »
2541 Views
Created with page4