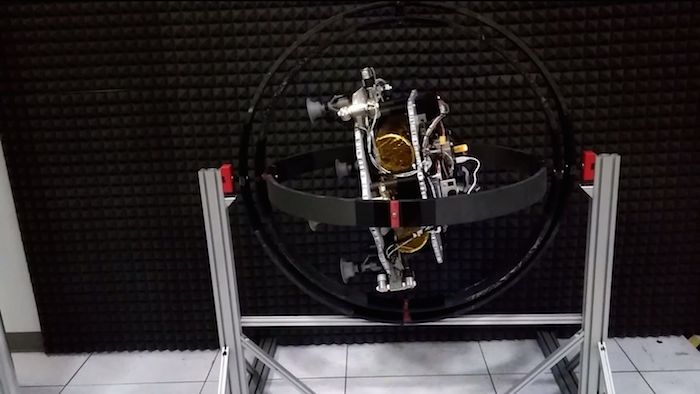 NASA is building robots to explore other planets, and drone technology for Earth. The logical next step: robot drones in space.
New research out of NASA’s Kennedy Space Center shows that the agency is working on ways to explore other planets and asteroids using robots that can fly to places its rovers can’t reach. Their design looks a lot like a traditional quadcopter. But in space, there tends to be a distinct lack of air, meaning NASA’s engineers can’t use the propulsion systems found in most commercial drones, as tiny propellers wouldn’t be enough to push the craft through the thin atmosphere. So the team has created a system that putters around using cold-gas jets.
The team is testing out whether it can have the drone fly autonomously—which it’s also trying to figure out for earthbound drones—or have it operated by someone back on Earth.
The drone would act much like NASA’s rovers, collecting samples using a range of tools that it could change, depending on what scientists are interested in on a given day. “This is a prospecting robot,” said Rob Mueller, a NASA senior technologist, in a release. The team’s prototype drone is about 5 ft wide—more than double the width of the average commercial drone—but was built with “off-the-shelf components” and parts the team 3D printed itself.
.
The team wants to deploy drones like the prototype to places that would’ve been impossible for rovers to access, like the inside of Martian volcanoes. A drone could fly into a volcanic crater to see if it would make a safe place for astronauts to set up a base, away from the harsh elements. “You could put a whole habitat inside a lava tube to shelter astronauts from radiation, thermal extremes, weather and micrometeorites,” Mueller said.
NASA is still working on helping the Federal Aviation Administration figure out how to fold autonomous drones into the US airspace. There’s no word yet, however, on whether any potential extraplanetary inhabitants have the same strong feelings that some US citizens have toward drones.
Quelle: QUARTZ
Raumfahrt
« Zum vorherigen Eintrag Zum nächsten Eintrag »
2630 Views
Created with page4