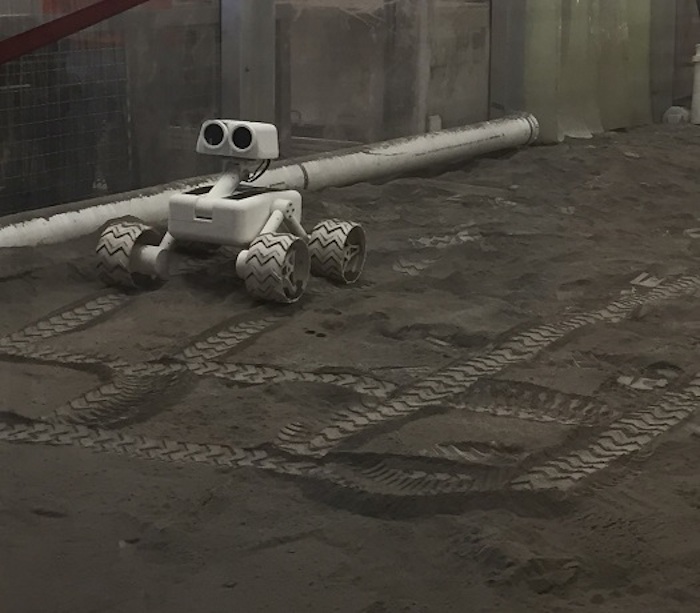 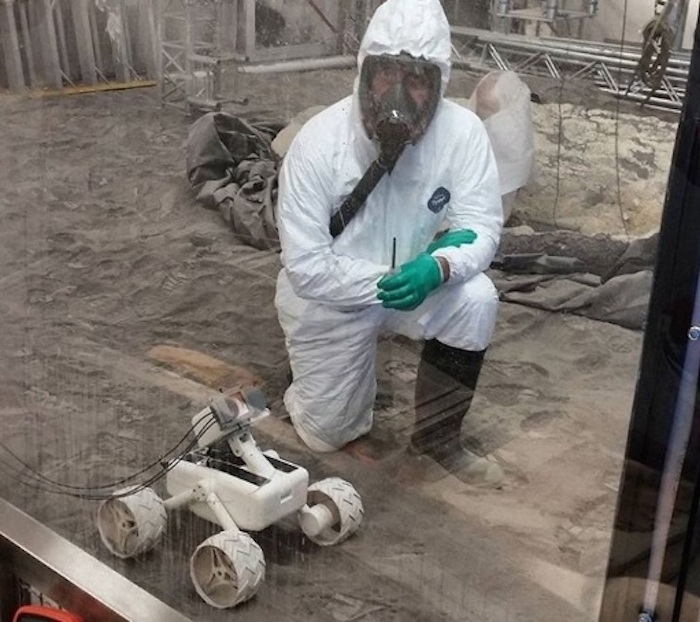 NASA test engineer Joe Beardall with Sagan rover. (Credit: ESF)
-
ESF interns partnered with scientists in their visual test series, to assess the functionality of NASA’s Electrodynamic Dust Shield Technology (EDS). This type of research began back in the Apollo Era, when Astronauts first landed on the Moon.
Lunar soil was found to be very dusty and sticky due to the charging effects of solar winds. The particles were also jagged, leading them to scratch spacesuits, as well as face shields and other materials. It became such a problem, the mission almost ended in failure. Official reports stated that Neil Armstrong and Buzz Aldrin were glad the mission didn’t last longer than three days because they were concerned their suits would not be able to seal back up due to the accumulation of dust.
Over time, NASA found they could use electrostatics to move particles around. EDS technology uses an electric curtain concept that has been shown to lift and transport particles using dielectrophorectic forces on a wide variety of soils. By printing a basic pattern on materials, researchers are able to send high voltage signals through varying waves to control the direction of soils, as long as they are out of sync with each other.
. 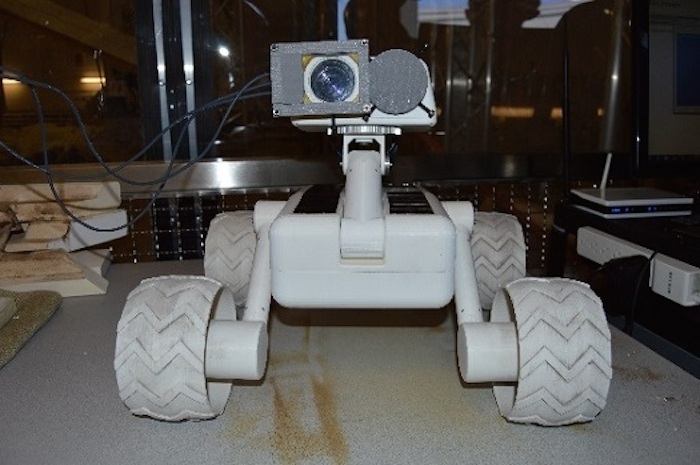 Sagan with NASA engineered Electrodynamic Dust Shield lens. (Credit: ESF)
-
The dust shield placed over Sagan’s camera lenses was transparent indium tin oxide painted on glass. Dust mitigation is a critical issue to tackle when competing in the Google Lunar XPRIZE, because if Sagan cameras are clouded with lunar regolith, he cannot transmit clear HD video.
In the end, all visual tests were successful and Swamp Works Manager, Jack Fox said, “We were pleased with the performance of our electrodynamic dust shield and we are grateful to the team for allowing us to integrate it onto their systems.”
. 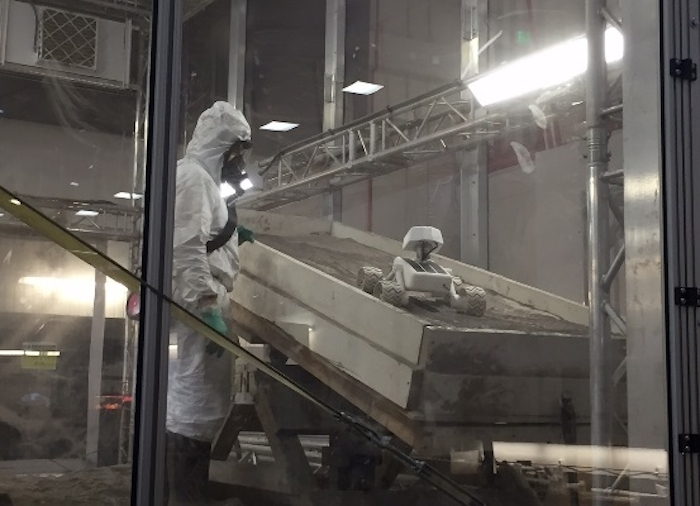 Vertical incline tests in Lunar Regolith Bin. (Credit: NASA/ Jack Fox)
After optics were assessed and completed, the team began its mobility test series. Standard roving motions were performed, as well as successful tork turns and the ability to dive into the depths of a crater and back out again. Sagan’s traction was nominal and had no slippage issues throughout the duration of the tests. For about an hour, the team pushed it’s rover to the limits, integrating software issues that might arise, as well as preforming incline tests on the tilt table that was built by the team a few years back.
This collaboration with NASA Kennedy has benefited our development stages greatly, and “is very exciting to see the work of students become a reality!” Ruben Nunez, President and CEO of the Earthrise Space Foundation. “Sagan has been designed with components that can be space qualified in order to send him to the Moon, and we look forward to fulfilling a lunar mission in the future.”
About Earthrise Space Foundation
Earthrise Space Foundation (ESF) is a Florida-based 501 (c)(3) non-profit corporation dedicated to developing space technology in collaboration with industry and academic institutions. ESF’s is creating a key set of lunar spacecraft infrastructure which will provide a platform for the delivery of commercial payloads to the lunar surface. All ESF efforts involve significant numbers of students and young professionals through paid internships, providing them with hands on experience building real spacecraft, and preparing them for future employment in the entrepreneurial space industry.
Quelle: Parabolic Arc.
Raumfahrt
« Zum vorherigen Eintrag Zum nächsten Eintrag »
2541 Views
Created with page4