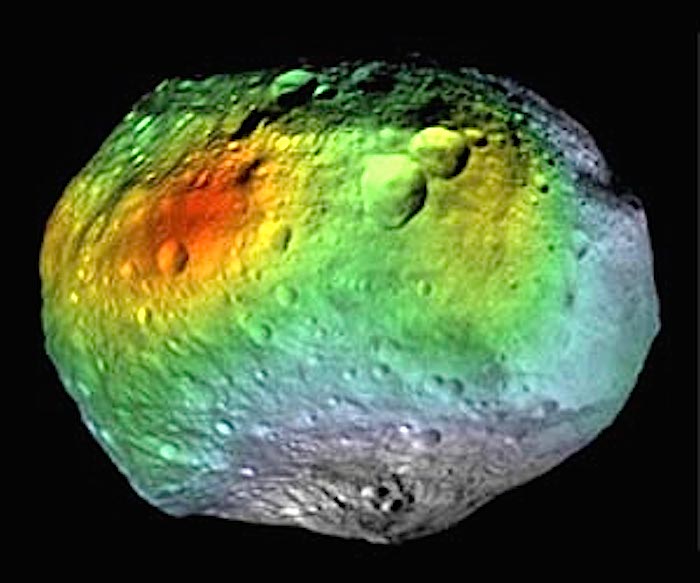 Studies of materials on the surface of Vesta offer new evidence that the giant asteroid is the source of howardite, eucrite and diogenite (HED) basaltic meteorites, supporting current models of solar system evolution and terrestrial planet formation, a new paper by Planetary Science Institute researcher Tom Prettyman says.
Prettyman, a senior scientist at the Planetary Science Institute, and co-authors determined the globally averaged concentrations of radioactive elements potassium (K) and thorium (Th) on Vesta's surface using data from the Gamma Ray and Neutron Detector (GRaND) instrument aboard NASA's Dawn spacecraft.
PSI Postdoctoral Research Scientist Yuki Yamashita and Senior Scientist Bob Reedy were coauthors on the paper "Concentrations of Potassium and Thorium within Vesta's Regolith" that appears in the Icarus Special Issue on Vesta's Composition.
"The K and Th content is important because together these elements provide constraints on the composition of materials from which Vesta was made and conditions in the early solar system," Prettyman said. The K/Th ratio of Vesta is very similar to that of the HED meteorites and distinct from other basaltic meteorites, which strongly supports connection between Vesta and the HEDs.
The solar system originated from a molecular cloud that collapsed to form the Sun and a rotating disk of gas and dust from which the planets grew. Vesta is thought to be a planetary "embryo," a leftover planetary building block that survived more or less intact to the present day. Because it underwent magmatic processes, similar to the inner planets, Vesta is also regarded as "the smallest terrestrial planet."
As the gas and dust cooled, elements condensed to form solid compounds. Each element has a representative condensation temperature. Volatile elements evaporate/condense at lower temperatures, whereas refractory elements condense at higher temperatures.
Potassium, a moderately volatile element, would have condensed at relatively low temperatures - about 700C - to form potassium feldspar. However, thorium condenses at much higher temperatures, 1300C. After accretion from the protoplanetary disk, Vesta was heated by the decay of short-lived radionuclides to the point of large-scale melting.
K and Th would likely have remained in constant proportions as Vesta cooled from its initial melted state to form a layered interior consisting of an iron-rich core, a mantle composed of iron- and magnesium-rich minerals, and basaltic crust richer in calcium and aluminum. In this process, K and Th were almost entirely concentrated in the crust. Thus, the K/Th ratio of the primordial material that made Vesta is likely very similar to that of Vesta's crust and regolith as viewed by GRaND.
All of the inner planets are depleted in moderately volatile elements, such as K, and have low K/Th ratios in comparison to the solar photosphere, which is thought to be representative of the composition of the solar nebula. Measurements of Vesta's K/Th ratio by GRaND show that this inner main belt asteroid is also depleted in K relative to Th. In fact, of the inner solar system bodies for which K/Th has been measured, Vesta is second only to the moon in K-depletion.
"Vesta was probably made early from material that condensed at high temperature, which limited the accumulation of K," Prettyman said. "However, the mechanisms for depletion of moderately volatile elements are still not fully understood."
Alternatives for depletion of K on Vesta include degassing of more volatile elements from high-temperature magmas and disruption and re-accretion of Vesta following a giant impact, similar to the formation of the Earth-Moon system. For various reasons, neither of these scenarios is favored.
The dearth of moderately volatile elements throughout the inner solar system remains one of the long-standing, unresolved problems of cosmochemistry. This paper provides another piece of the puzzle in this complex story and further evidence that the HED meteorites hail from Vesta.
Quelle: SD
Astronomie
« Zum vorherigen Eintrag Zum nächsten Eintrag »
2396 Views
Created with page4