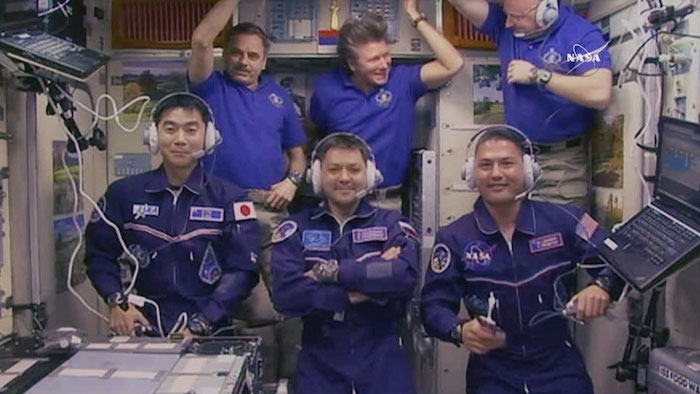 NASA astronaut Kjell Lindgren, Oleg Kononenko of the Russian Federal Space Agency (Roscosmos) and Kimiya Yui of the Japan Aerospace Exploration Agency (JAXA) joined their Expedition 44 crewmates when the hatches between the Soyuz TMA-17M spacecraft and the International Space Station officially opened at 12:56 a.m. EDT. Expedition 44 Commander Gennady Padalka of Roscosmos, as well as Flight Engineers Scott Kelly of NASA and Mikhail Kornienko of Roscosmos welcomed the new crew members aboard their orbital home.
The crew will support several hundred experiments in biology, biotechnology, physical science and Earth science — research that impacts life on Earth.
Kjell Lindgren and Kimiya Yiu are now the 217th and 218th people to board the International Space Station. This is the first visit for both Lindgren and Yiu, and the third for Kononenko.
Lindgren, Kononenko and Yui will remain aboard the station until late December. Kelly and Kornienko, who have been aboard since March 27, will return to Earth in March 2016 at the end of their one-year mission. Padalka, who also has been aboard since March 27, will return to Earth in September, leaving Kelly in command of Expedition 45. Kelly and Kornienko will return to Earth in March 2016 with Expedition 46 after 342 days in space.
Quelle: NASA
.
Update:
-