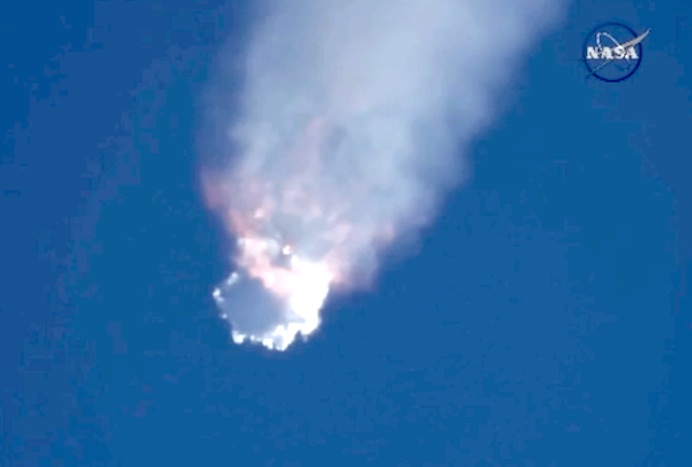 A few moments later, a cloud of debris and propellant engulfed the rocket as it broke up above the Atlantic Ocean. It is not yet known what might have triggered the failure. NASA TV
.
Quelle: CBS
---
Update: 29.06.2015
. 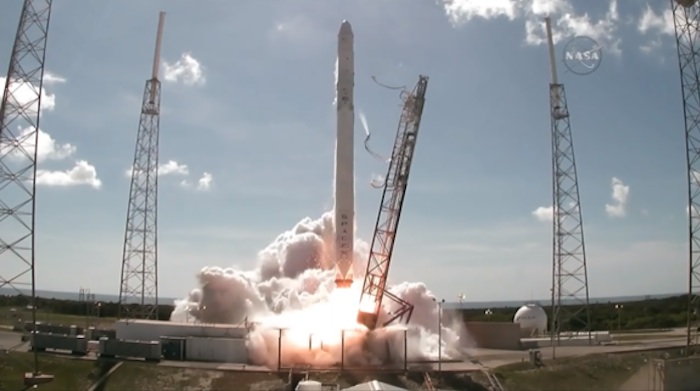 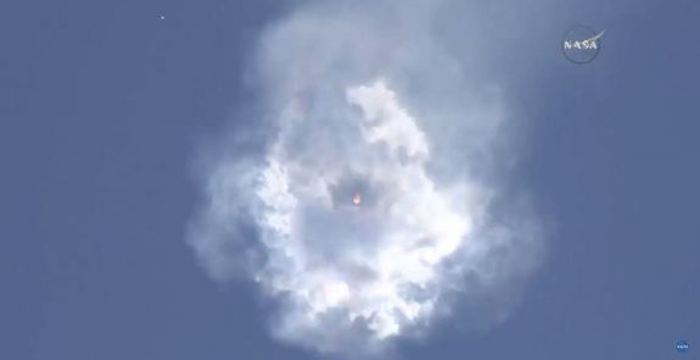 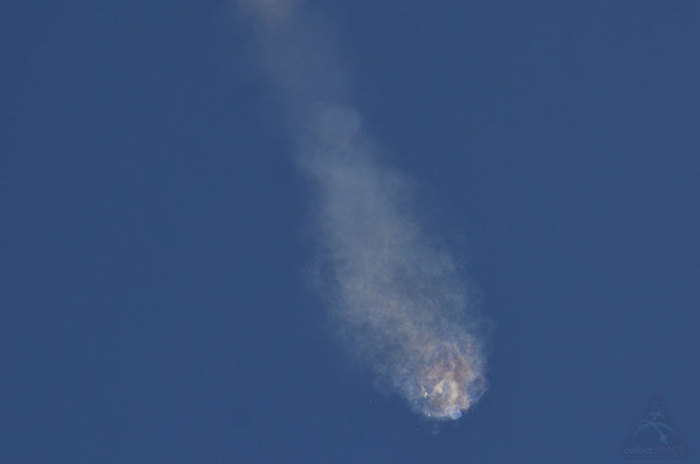 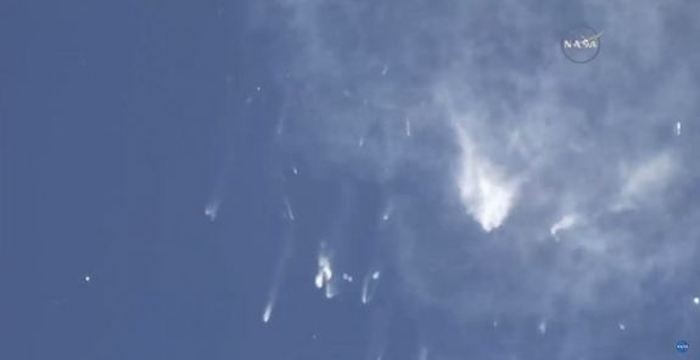 Quelle: SC
-
NASA Administrator Statement on the Loss of SpaceX CRS-7
The following is a statement from NASA Administrator Charles Bolden on the loss Sunday of the SpaceX Commercial Resupply Services 7 (CRS-7) mission.
“We are disappointed in the loss of the latest SpaceX cargo resupply mission to the International Space Station. However, the astronauts are safe aboard the station and have sufficient supplies for the next several months. We will work closely with SpaceX to understand what happened, fix the problem and return to flight. The commercial cargo program was designed to accommodate loss of cargo vehicles. We will continue operation of the station in a safe and effective way as we continue to use it as our test bed for preparing for longer duration missions farther into the solar system.
“A Progress vehicle is ready to launch July 3, followed in August by a Japanese HTV flight. Orbital ATK, our other commercial cargo partner, is moving ahead with plans for its next launch later this year.
“SpaceX has demonstrated extraordinary capabilities in its first six cargo resupply missions to the station, and we know they can replicate that success. We will work with and support SpaceX to assess what happened, understand the specifics of the failure and correct it to move forward. This is a reminder that spaceflight is an incredible challenge, but we learn from each success and each setback. Today's launch attempt will not deter us from our ambitious human spaceflight program.”
David Weaver
Headquarters, Washington
202-358-1600
Quelle: NASA
-
Update: 30.06.2015
.

The Coast Guard is working with SpaceX and agencies to monitor debris from the Falcon 9 rocket that exploded Sunday, now floating more than 150 miles off the Florida-Georgia coast.
An unmanned SpaceX rocket was carrying supplies to the International Space Station when it exploded and broke apart Sunday shortly after liftoff. It was the third NASA cargo mission to fail in eight months and occurred just over two minutes into the flight from Cape Canaveral. Pieces of the rocket could be seen falling into the Atlantic, the remains of more than 5,200 pounds of space station cargo that were on board the rocket.
The Coast Guard is warning vessels that might be going through that area, and asking the public to report any debris that could wash ashore. No impacts from debris are expected on Florida beaches, but authorities will monitor that for any changes.
“As with any incident involving spacecraft wreckage, debris should not be handled by members of the public,” said Capt. Jeffrey Dixon, the Coast Guard Sector Jacksonville commander in a news release. “These critical pieces of evidence are important in the investigation process and should be reported immediately to SpaceX or the U.S. Coast Guard. “
The SpaceX debris recovery hotline is (866) 392-0035.
Quelle: TimesUnion Jacksonville
.
Update: 1.07.2015
.

Dragon capsule did not survive impact when it hit water, officials say

ORLANDO, Fla. -
Debris from the SpaceX Falcon 9 rocket that exploded Sunday shortly after launch from Cape Canaveral has been located off the Florida coast, the U.S. Coast Guard said."The Coast Guard is working in close coordination with SpaceX and partner agencies to monitor the Falcon 9 debris field currently located more than 150 miles off (Jacksonville)," authorities said.
SpaceX officials said in an update later Tuesday that the Dragon capsule did not survive impact after the Falcon 9 rocket broke up. SpaceX said that it is recovering "significant portions of debris."
To track the debris, the Coast Guard dropped flares and a buoy into the debris field, which is 20 miles by one-half mile in size.  Authorities cautioned boats in the area and asked the public to report any sightings of debris that might wash ashore.
"Currently, no impacts from debris are expected for Florida beaches, and authorities will continue to monitor for any changes to this estimate," the Coast Guard said.
“As with any incident involving spacecraft wreckage, debris should not be handled by members of the public,” said Capt. Jeffrey Dixon, commander of Coast Guard Sector Jacksonville.  “These critical pieces of evidence are important in the investigation process and should be reported immediately to SpaceX or the U.S. Coast Guard."
The SpaceX debris recovery hotline is 866-392-0035.
Flagler County authorities on Tuesday also asked residents to avoid any debris and call 911 if any washes ashore.
"While it is highly unlikely any of the debris resulting from the explosion of the SpaceX’s Falcon 9 rocket and Dragon capsule will reach Flagler County’s coast, emergency officials are asking residents to steer clear of it and notify authorities," Flagler County said.
Variables that could cause a shift in the direction that the debris is drifting include wind, current, tides and the size of the debris.
“It is possible that debris could come ashore anywhere from the southeastern U.S. to the mid-Atlantic coastline,” according to the Coast Guard.
The rocket exploded shortly after liftoff Sunday from the Cape Canaveral Air Force Station.  The cause of the failure remains under investigation.
Quelle: WKMG LOCAL 6
.
Update: 21.07.2015
.

Preliminary investigation blames two-foot-long, one-inch-thick piece of metal
Next version of SpaceX rocket will not be tested until spring 2016, CEO says
.
A two-foot-long steel strut only an inch wide at its thickest point was to blame for last month’s midair explosion of an unmanned SpaceX Falcon 9 rocket, according to a preliminary investigation. SpaceX CEO Elon Musk said Monday that the part, provided by an external supplier he declined to name, was “not something that should ever have failed at this force level”.
The disaster, a major setback for Musk’s ambitious space plans, also destroyed the Dragon spacecraft that the Falcon 9 was carrying. The Dragon, a partially reusable spacecraft developed by SpaceX, was due for a rendezvous at the International Space Station.
In his first public comments on the disaster, Musk said the strut “would appear to be incorrectly made but with no visible way of determining that from the outside”. The part held in place a tank of helium pressurized at about 55,000 pounds per square inch, cooled cryogenically by liquid oxygen and fed into the engine and back out again to keep the pressure equal in the rocket’s second stage.
“The strut that we believe failed was designed to handle 10,000lbs of force and it failed at two thousand pounds of force,” Musk said.
He also said that the Dragon could have been saved. “If the software had initiated the parachute deployment, the Dragon spacecraft would have survived,” Musk said. “We’re adding additional software so that the the spacecraft will always attempt to save itself. It’s an unfortunate thing.”
Musk said the test of SpaceX’s next version of its rocket, the Falcon Heavy, had been pushed back to the spring of 2016.
Musk cautioned that further investigation by SpaceX might reveal more over time but said that the inquiry, conducted in cooperation with the Federal Aviation Administration, Nasa and the US air force, suggested the strut had allowed the helium tank to shoot up through the stage as its buoyancy increased in proportion to the gravitational pressure of the rocket’s acceleration, ultimately releasing helium into the liquid oxygen and causing “a pressure event”.
Advertisement
That event took place over .893 seconds – part of the reason the findings were only preliminary. “When milliseconds matter, it’s remarkably difficult to line things up exactly right,” he said.
“It’s very difficult to test a rocket stage,” Musk said. “The only way to fully test a rocket stage would be to have an enormous centrifuge that doesn’t exist on Earth.”
The tech CEO said he believed the company had begun to rest on its laurels after a several successful launches. “The company as a whole, I think, became a little bit complacent over seven years, after twenty successes in a row,” he said, “and this is an important lesson and something we’re going to take with us in the future.”
Musk said SpaceX wouldn’t be using those specific struts in the future and, when the replacements were selected, would be testing each one individually irrespective of the supplier’s certification.
Like a wedding officiant, Musk asks his employees to speak or forever hold their peace, he told reporters. “Before any flight I always send out an email saying: ‘If anyone can think of any possible reason why we should keep this flight from launching, they should call me on my cell phone or email me whether their manager agrees with it or not,’” he said. “I think sometimes it just seems like Elon being paranoid again.”
The failure, he said, wouldn’t affect the company’s submission for Nasa’s upcoming commercial cargo contract.
“Rockets are a fundamentally difficult thing,” he said.
Quelle: the guardian