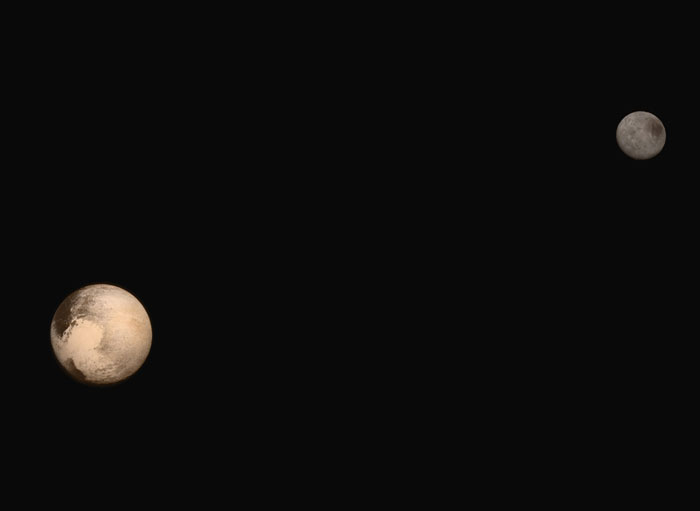 A breathtaking montage of Pluto and Charon, assembled from separate images that were taken on July 13 and 14 from NASA’s New Horizons spacecraft, as the latter was making its historic close fly by of the distant dwarf planet and its system of moons. New Horizons’ highly successful mission has provided a new thrust among scientists and the general public alike, for requesting that Pluto’s current status as a ‘dwarf planet’ been reconsidered. Image Credit/Caption: NASA/Johns Hopkins University Applied Physics Laboratory/Southwest Research Institute
-
There was a time when the Solar System used to be a tidy and well-categorised place. Moving outwards from the Sun there were four small rocky terrestrial planets that were followed by four gas giants which laid further out, with a large asteroid belt in between separating these two planetary groups. And then there was the oddball Pluto with the disorderly behavior: the smallest of the planets, whose greatly elongated orbit and high inclination put it well above and below the plane of the ecliptic during its long 248-year revolution around the Sun. During the late-20th century however, it had become increasingly obvious that all this tidy arrangement seemed to be too good to last. And by the turn of the 21st, it had changed completely.
It all began on August 30, 1992 with the discovery of an 160 km-wide object just over 40 Astronomical Units away from the Sun, by astronomers Dave Jewitt and Jane Luu at the Mauna Kea Observatory in Hawaii who at the time were investigating the Solar System’s apparent emptiness beyond the orbit of Pluto. The newly found object. which was to be known as 1992 QB1, represented the first long-sought member of the Kuiper Belt, a vast disk-shaped region of hundreds of thousands of icy planetesimals that had been previously hypothesized by astronomers during the 1940’s and ’50s to exist beyond Neptune. The discovery of 1992 QB1 proved to be a historic one that soon opened the floodgates for the discovery of more than a thousand more such trans-Neptunian objects in the decades that followed, showing that the Solar System was anything but empty in these distant outer reaches away from the Sun.
.

The discovery images of 1992 QB1, the first Kuiper Belt Object to be found beyond the orbit of Neptune. Image Credit: David Jewitt
.
One such trans-Neptunian object in particular, created quite a stir when it was first detected in 2005 by a research team working at the Palomar Observatory that was led by astronomer Mike Brown. Instead of being just another inconspicuous lump of rock and ice, the object that was discovered by Brown’s team which came to be known as Eris, was a whooping 2,360 km wide which put it in exactly the same size category with Pluto. As if that wasn’t enough, Eris was also found to be slightly more massive, prompting many scientists at the time to call it the Solar System’s tenth planet. But instead of resulting in the addition of one more member in the Sun’s planetary family, the discovery of Eris eventually led to the subtraction of one – Pluto. Following a long and very heated debate between professional astronomers during the now famous 26th General Assembly of the International Astronomical Union which was held in Prague on 2006, it was officially decided that Pluto, as well as Eris, didn’t meet the criteria for planethood. The IAU, which is responsible for the naming and nomenclature of celestial bodies within the Solar System, categorised both objects as ‘dwarf planets instead’, while also offering a new definition for planethood according to which an object is a planet if a) it is in orbit around the Sun, b) has sufficient mass to assume hydrostatic equilibrium (a nearly round shape), and c) has “cleared the neighbourhood” around its orbit. According to this definition, since Pluto and Eris aren’t massive enough to clear from their surroundings all the thousands of objects that co-orbit within the Kuiper Belt, the just fall short of being called ‘major planets’ like Earth, Mars and Jupiter.
To say that this official stance by the IAU on the matter has created a controversy, would be an understatement, while leaving scientists and the public alike greatly divided on the subject of just what constitutes a planet ever since the end of the IAU’s 26th General Assembly. Many prominent members of the scientific community have feverishly debated many compelling arguments for and against this demotion of Pluto. One of them, is Neil deGrasse Tyson, Director of the Hayden Planetarium in New York, who feels that stripping Pluto of its planetary status is justified. “We saw that these icy [Kuiper Belt] objects [that] were being discovered in the outer Solar System. [had] kind of similar properties to Pluto, all odd properties,” Tyson would later comment during an interview in 2009 at the Los Angeles Public Library. “Pluto was an odd planet, but was a normal version of what these icy bodies are. And we realised that maybe Pluto wasn’t the ninth planet, maybe it was the first object discovered of this new class of objects [in the Kuiper Belt] that are out there…So, all we did, was take Pluto and group it with the rest of these icy bodies.” It is a view that is shared by Mike Brown, the discoverer of Eris, who himself was initially looking for the Solar System’s tenth planet. “You know, it really was that astronomers made a mistake back in 1930,” would say Brown during a radio interview for NPR’s “Science Friday”. “And so, in 2006, when Pluto got demoted, it was really fixing the Solar System back to the way it probably should have been, as opposed to doing something mean to Pluto. So it’s really not that we were against Pluto or had any big complaints about it. But it just never should have been classified with those eight big things.”
. 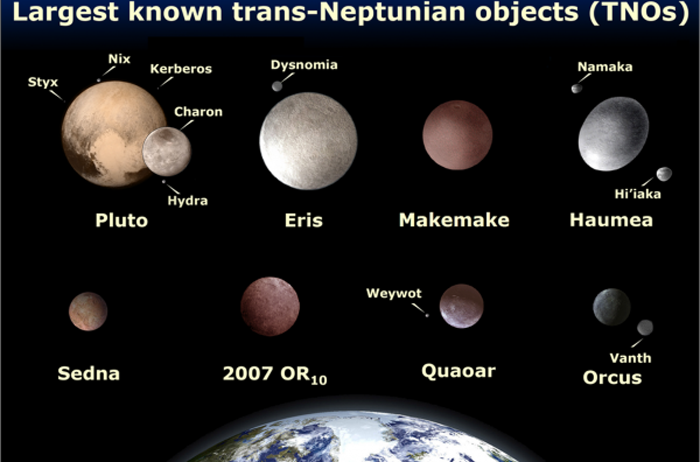 A sample of the largest and best known Kuiper Belt Objects which lay beyond the orbit of Neptune. It was the discovery of these objects since the early 1990’s and in particular that of Eris, which prompted the IAU to reclassify Pluto as a ‘dwarf planet’ in 2006.
.
Not so fast, says Alan Stern, principal investigator of NASA’s New Horizons mission, which recently completed its historic fly by of the Pluto system, while beaming back breathtaking close-up images of the distant planet and its moons. Stern has been one of the many experts within the scientific community who have expressed harsh criticism towards the IAU for its controversial definition of what constitutes a planet, calling it nothing short of ludicrous. Instead, he has proposed an alternative definition for planethood, one that focuses more on the physical properties of planets themselves rather than the types of orbits that they occupy, which he argues should be the defining criterion. “The definition that I like, and that a lot of planetary astronomers like, is called the geophysical planetary definition,” Stern would say during a radio interview for PBS. “It asks only two questions, and if it passes both tests, it’s a planet. First question is it in space? Pluto passes that test pretty easily. Secondly, is it large enough for gravity to have overwhelmed material strength so that it will flow into a sphere, the shape of a sphere? And Pluto also passes that test, in fact by a large margin, and so that’s how we differentiate between small rocky shards and big things that act like planets.”
Leaving the issue of a planet’s physical properties aside, the current definition of planet that is held by the IAU, according to Stern, introduces some additional major problems that haven’t been really addressed as well. For instance, the Earth is surrounded by tens of thousands of what are known as Near-Earth Objects, like asteroids and comets, whose orbits bring them into a great proximity with our home planet, including the so-called ‘Earth-trojan’ asteroids which orbit the Sun in the vicinity some of our planet’s Lagrangian points. Does this mean that the Earth hasn’t ‘cleared its neighborhood’? If so, then according to the IAU’s definition our home planet should also be re-classified as a ‘dwarf’ one. What’s more, if Earth were to be repositioned at the same location in the Solar System as Pluto, it would too be surrounded by the thousands of Kuiper Belt Objects which according to the IAU was the defining criterion for stripping Pluto of its planethood in the first place. Would that then make Earth a planet as well?
With New Horizons’ highly successful fly by of Pluto now behind us, many believe that its high time that the dwarf planet’s status is re-visited, including a group of people which includes actor and director Paul Feig, writer, actor Trace Beaulieu, Alan Stern himself, as well as Phil Metzger, a planetary scientist at the University of Central Florida in Orlando. Together, they have created an online petition at change.org, called ‘Declare Pluto a Planet’, with the aim of gathering at least 5,000 signatures from the general public that would be sent to the IAU’s upcoming 29th General Assembly, which is to be held this August in Hawaii, in order to further stress the need for the re-evaluation of Pluto’s current planetary status. “The IAU meets again for its general assembly in August 2015, the team writes in the petition’s page. “And in the coming weeks, New Horizons will collect unprecedented amounts of data about the Pluto system, calling in to question the definition set forth by the IAU. If thousands of people demand that Pluto be reclassified as a planet at the same time as New Horizons sends down the data to prove it, we can reignite a generation of future planetary exploration.”
As has been showcased by New Horizons’ spectacular initial findings, Pluto and its assortage of moons constitute a system that is entirely unique within the context of the rest of the Solar System’s planets. As more exciting results are sure to come in the coming weeks and months from the New Horizons mission, maybe the time has come to reconsider once more where Pluto fits in the grand scheme of things.
Quelle: AS
Astronomie
« Zum vorherigen Eintrag Zum nächsten Eintrag »
2385 Views
Created with page4