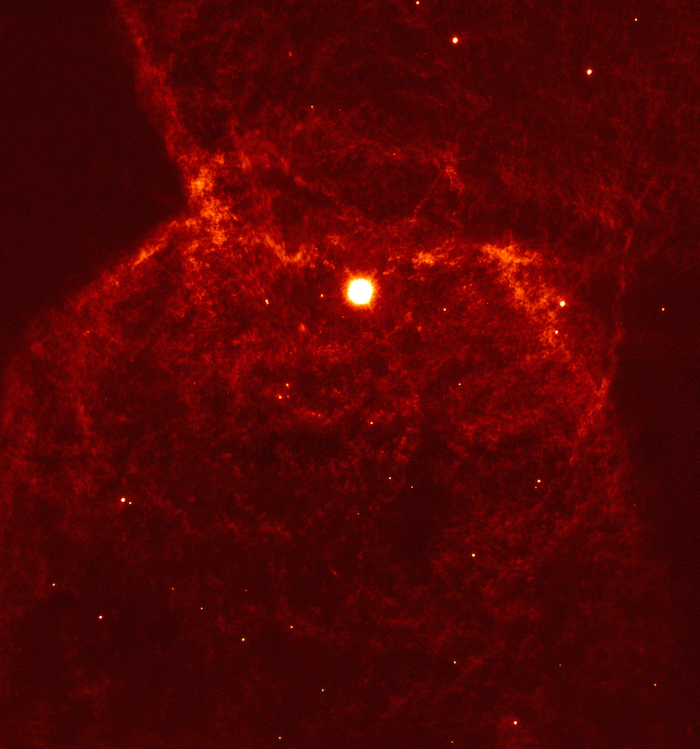 Figure 1: The new image of NGC 2346 showing unprecedented resolution of the molecular hydrogen gas. The image is about 1 arc minute on a side: north is up, east is to the left. In contrast, the size of the full moon is 30 arc minutes.

NOAO scientists, using the Gemini Observatory 8-meter telescope in Chile, have obtained the highest resolution image ever obtained for the planetary nebula NGC 2346. Shaped like a butterfly, or an hourglass, but known scientifically as a bipolar planetary nebula, this object is at a distance of 2300 light years from our sun in the constellation Monoceros.
The new observations of this gaseous nebula, shown in the first figure, resolve details comparable in size to our own solar system. The team detected previously unresolved knots and filaments of molecular hydrogen gas - details that no other telescope on the ground or in space, not even the Hubble Space Telescope, has been able to resolve.
Molecular hydrogen in the bipolar lobes of NGC 2346 was detected almost 30 years ago, although previous observations suggested only a smooth torus. This filamentary structure observed by the team matches the mechanism they have proposed in which a hot bubble of gas surrounding the central star breaks out and fragments the shell of surrounding gas. The gaseous knots probably represent a common phenomenon that occurs whenever two fluids (or gasses) of different densities come in contact, and the lighter fluid is pushing on the heavier fluid. This is easily seen by anyone who has ever watched colored oil in a glass of water.
The authors have constructed computer models to understand how the gasses are expected to interact: the accompanying movie shows how the gas will evolve in time. As first author Arturo Manchado said, “In this movie we show the model results in time steps up to 9000 yrs. The blue color corresponds with the emission of the molecular hydrogen gas. The model shows an initial toroid of cool gas at the equator. Once the swept-up shell is highly fragmented, the toroid is no longer visible and only the large clumps will be seen.”
NGC 2346 is a star caught in the final phases of its lifecycle. It began life as a double star system, each companion about twice as massive as the sun and both revolving around their common center of gravity. The more massive of the two stars burned through its fuel faster than its lower mass companion, expanded as a red giant, and has now shed its outer layers to become a white dwarf star, with a present mass between 0.3 and 0.7 solar masses. The bipolar nebula, or butterfly shape of this planetary, has probably been sculpted by the star pair, although this is still under study. With an orbital period of 16 days, the two stars are closer together than the sun and Mercury. Material spilling from the more massive star over the lifetime of the pair makes it difficult to calculate the initial mass of the star.
The observations were taken with the new near infra-red Adaptive Optics Imager system on the Gemini telescope during the initial testing phase of this instrument. Adaptive optics is a novel technique that allows for real time correction of distortions to an astronomical image caused by the earth’s atmosphere.
The paper will appear in the Astrophysical Journal (Authors Arturo Manchado, Letizia Stanghellini, Eva Villaver, Guillermo García-Segura, Richard A. Shaw and D. A. García-Hernández)
NOAO is operated by Association of Universities for Research in Astronomy Inc. (AURA) under a cooperative agreement with the National Science Foundation.
.

Movie caption:
Computer simulation showing how the nebula is expected to evolve over a period of about 9,000 years. Presently the nebula is just starting this process. The thumbnail above shows the process in nine, 1,000 year, steps. There is also a version of the movie that uses increments of 200 years.
Quelle: National Optical Astronomy Observatory
Astronomie
« Zum vorherigen Eintrag Zum nächsten Eintrag »
2244 Views
Created with page4