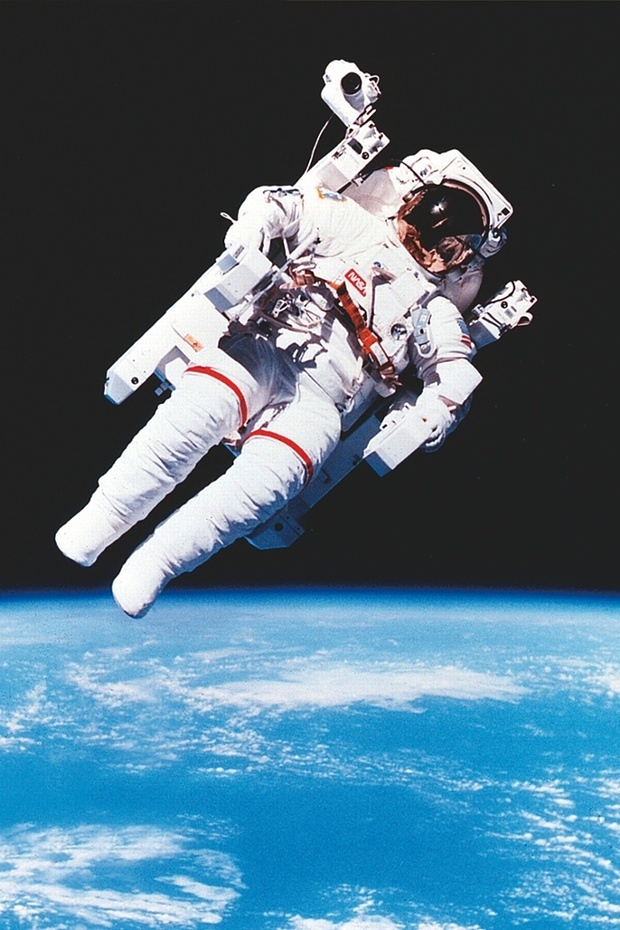 ‘It was a wonderful feeling, a mix of personal elation and professional pride.
-
The main aim of our nine-day mission on Challenger was the release and deployment of two communications satellites; the walk would follow that. It was a long time in the making: decades earlier, I helped develop the jet-propelled backpack I’m wearing, an MMU, or Manned Manoeuvring Unit. We were still testing and tweaking it six weeks before we went up. I was delighted to have been picked for the mission: it was a murky selection process, lots of back and forth between mission command and management.
The day before my walk, we reduced the pressure and increased the oxygen in the shuttle to get the nitrogen out of my bloodstream, otherwise I’d get the bends. Where I live now, outside Denver at an altitude of 8,300ft, has lower oxygen levels than the cabin did that day.
On the day itself, I put on my underwear, complete with airducts and flexible tubing filled with water to cool me down, and my pressure suit. The crew said, “You’re ready. Go, go, go!” so I stepped into the airlock, closed the hatch, depressurised it, opened it – and away I went.
I don’t like those overused lines “slipped the surly bonds of Earth”, but when I was free from the shuttle, they felt accurate. It was a wonderful feeling, a mix of personal elation and professional pride: it had taken many years to get to that point. Several people were sceptical it would work, and with 300 hours of flying practice, I was over-trained. My wife was at mission control, and there was quite a bit of apprehension. I wanted to say something similar to Neil [Armstrong] when he landed on the moon, so I said, “It may have been a small step for Neil, but it’s a heck of a big leap for me.” That loosened the tension a bit.
I’d been told of the quiet vacuum you experience in space, but with three radio links saying, “How’s your oxygen holding out?” “Stay away from the engines!” “When’s my turn?” it wasn’t that peaceful.
My walk lasted six hours 45 minutes, and I stayed alongside the shuttle the whole time, moving 100 yards one way, 100 yards back. I was travelling at more than 18,000 miles an hour, but wasn’t aware of it, because the shuttle was going at the same speed. It was only when I looked at the Earth that I could tell we were moving fairly rapidly. At one point, I noticed we were over the Florida peninsula: it was reassuring to see something I recognised.
An untethered space walk like this would be unlikely today, with the shuttle programme wound up, though Nasa is now working on an advanced version of the MMU for the exploration of asteroids. You can’t walk on them – there’s nothing to hold on to, they’re like big lumpy potatoes – but what you can do is fly around them, push up against them.
This photograph, taken by Robert Gibson from the shuttle, is beautiful, partly because the sun is shining directly on me. That’s why I have my visor down (although if you look closely, you can make out a few of my features). It’s also one of its attractions: my anonymity means people can imagine themselves doing the same thing. At visitor centres, they often have life-sized cardboard versions with the visor cut out, so people can peep through. Like Neil said in 1969, I was representing mankind up there.
Quelle: the guardian
Raumfahrt 47 erster ungebundener Raumflug
« Zum vorherigen Eintrag Zum nächsten Eintrag »
2213 Views
Created with page4