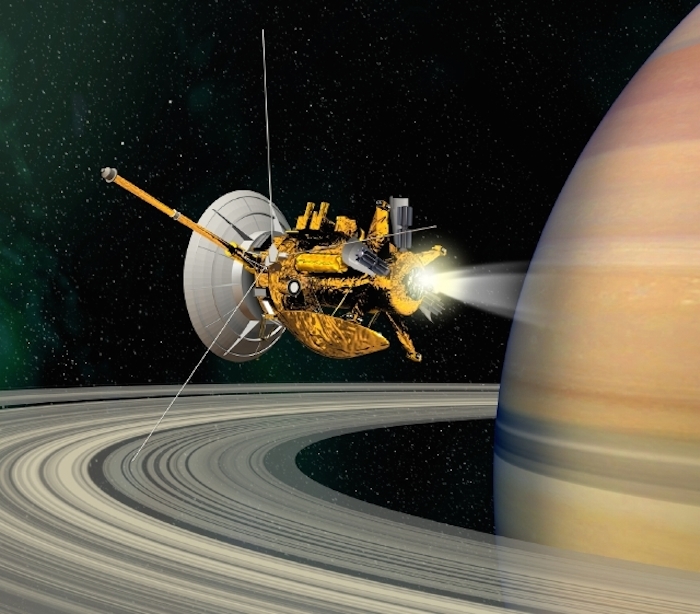 July 1 marked the beginning of the twelfth year in orbit about Saturn for NASA’s Cassini spacecraft, but this week also served as a reminder that the mission’s science extends far beyond our Solar System’s second-largest planet. So far, in fact, that much of Cassini’s work this week focused on understanding not the environment around Saturn, but that which encircles other stars. Our Solar System is not alone in the cosmos; at night the stars remind us that our Sun is but one amongst hundreds of billions in the Milky Way. Physical evidence of this is quite literally all around us. Just like the Earth moves in orbit around the Sun, the Sun—and everything around it—is in orbit about the center of the galaxy. As we complete our 200-million-year journey around the Milky Way, the area of space dominated by the Sun plows through a cloud of material cast off by our galactic neighbors. The density of these particles within the Solar System is astonishingly low. On its three-and-half-year cruise between Jupiter and Saturn, Cassini logged nearly 500 collisions between its Cosmic Dust Analyzer (CDA) and particles in space. Of those, only six were candidates for being so-called interstellar dust particles (IDPs). Six collisions in 1,278 days of travel! Cassini took five days this week to carry out further dust studies, simultaneously looking at particles originating in the Saturnian system and hoping to stumble upon another of these elusive interstellar travelers.  IDPs are incredibly small; some are comprised of just a few molecules. When one strikes the CDA, its velocity, mass, electric charge, and composition are recorded. With knowledge of the spacecraft’s orientation, researchers can work backwards to determine the path the particle must have taken. Orbits centered on the Sun probably have an origin close to home; those with exceptionally large orbits could have come from elsewhere in the galaxy. Grains of interstellar material were first found buried deep inside meteorites and represent our only contact with molecules that have existed since before the Sun formed more than four and a half billion years ago. The IDPs observed by Cassini, on the other hand, are much younger and probably represent the composition of interstellar space as it exists today. By understanding the material which surrounds our Solar System, scientists hope to gain new insight into the conditions experienced by forming stars. How the population of dust particles varies in interplanetary space could also shed light on how matter traverses the vast cosmic distances. The Cassini-Huygens mission is a collaborative effort between NASA, ESA, and the Italian Space Agency. Launched in 1997, it reached Saturn in 2004 and has since been studying the planet, its moons, and its rings. In 2005, the Huygens probe made the first landing on Titan, Saturn’s largest moon. After completing its second mission extension in 2017, Cassini will make a series of close passes to the planet and then end its time at Saturn by plunging into the planet’s atmosphere.